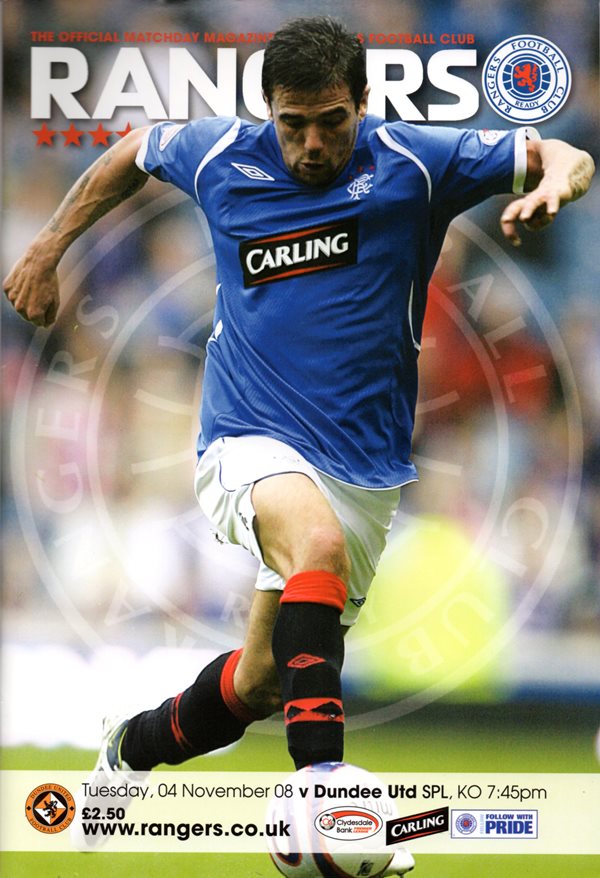 An excellent Dundee United were denied a famous victory over Rangers at Ibrox when a last minute goal saw the home side snatch a 3-3 draw in what was an enthralling encounter.

A first-half double from Francisco Sandaza cancelled out goals from Steven Davis and Sasa Papac, and just when Scott Roberston’s second half strike looked like it was going to be the winning goal, a last gasp thunderbolt from Kevin Thomson meant the points would be shared.

Rangers started the game brightly and forced United goalkeeper Lukasz Zaluska into action in the first minute. Steven Davis cut inside from the right and unleashed a powerful left-footed shot goal-wards, but the Polish stopper managed to turn it round the post.

United gradually came into the game and were enjoying more than their fair share of possession, only for the home side to take the lead with a goal out of nothing. Davis was again allowed to come inside and this time his right-footed shot curled passed Zaluska to put Rangers 1-0 up after 11 minutes.

That brought an immediate response from Craig Levein’s men. A clever exchange between Craig Conway and Warren Feeney on the left allowed Conway the space to cross. The ball fell to Scott Robertson, but he volleyed over the bar under pressure from the Rangers defence.

With a quarter of an hour gone, United drew level when a long ball forward found Feeney, who laid the ball off to Morgaro Gomis. He then played a perfectly weighted pass through to Francisco Sandaza who struck a low drive past Alan McGregor to make it 1-1.

United then went into a deserved 2-1 lead after 27 minutes when a clever reverse pass from Conway sent Paul Dixon clear on the overlap. His cutback found Robertson, whose effort was saved by McGregor, but Sandaza was on hand to force home the rebound.

The Tangerines were looking comfortable and almost extended their lead on the half hour when a Dixon throw-in broke to Lee Wilkie, only for the United captain to slice his volley wide.

Then, a moment’s lapse in concentration saw Walter Smith’s men make it 2-2 after 35 minutes. Nacho Novo, with his back to goal, managed to flick the ball over the United defence and into the path of Sasa Papac, who slammed the ball past Zaluska.

United held on until the break, but 2-2 was no more than they deserved.

Rangers came out all guns blazing at the start of the second half and Zaluska was forced into an early save from Kris Boyd.

In the 53rd minute, Novo broke clear down the right and played the ball into Miller, who tee-ed up Boyd for another strike, but again Zaluska was equal to it.

After weathering the storm, United began to find their way back into the game, and went in front again just before the hour mark.

A long throw-in from Dixon found its way to Robertson at the back-post, and he slotted the ball home to send the travelling Arabs into raptures.

Rangers almost hit back immediately, when Pedro Mendes played the ball through to Boyd, whose goal-bound effort was brilliantly tipped round the post by Zaluska.

As the home side pressed for the equaliser, United had opportunities to counter. With 10 minutes to go, Conway fed Sandaza on the left, who cut inside and struck a fierce shot just over and wide of McGregor’s left-hand post.

Then, just as United looked as thought they were heading back to Tannadice with all three points, the home side scored in the dying moments. Thomson skipped passed two midfielders and unleashed a powerful drive beyond Zaluska to make it 3-3 and break Tangerine hearts.