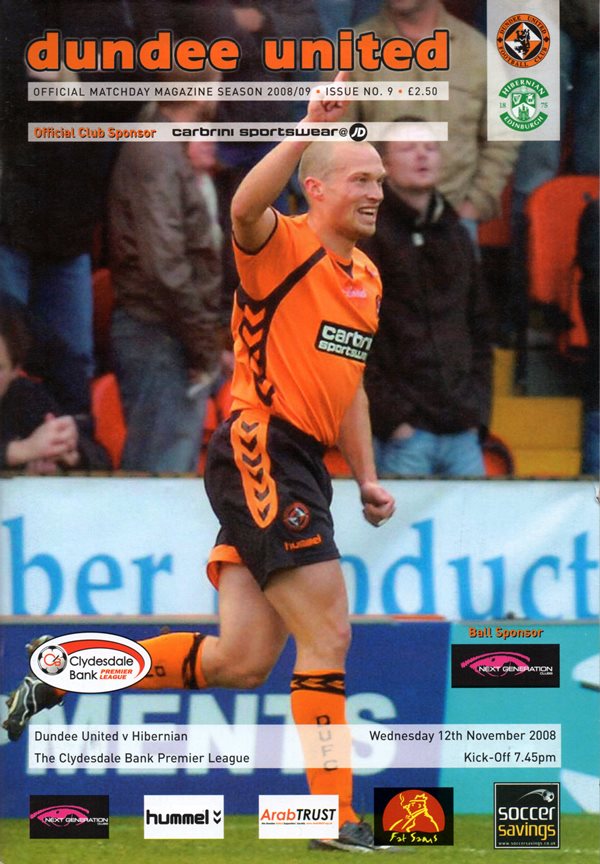 United continued their impressive run of victories with a comfortable 2-0 win at home to Hibernian.

After a quiet opening period, the game was brought to life in the 12th minute when Morgaro Gomis and Willo Flood exchanged passes to release Scott Robertson down the right hand side. The United midfielder played a first-time ball into the path of Roy O’Donovan, but the striker fired straight at Hibs ‘keeper Andrew McNeil.

Five minutes later, the home side almost got themselves in front. Flood played a perfectly weighted chip into the path of Sandaza, who laid the ball off to the advancing Robertson, but he pulled his effort wide of the post.

It was midway through the first period before Hibs had their first worthy attempt at goal. Souleymane Bamba played the ball over the top and on to the chest of Joe Keenan, who turned and volleyed just wide of Lukasz Zaluska’s right hand post.

Moments later, United had a penalty claim turned down. Flood crossed the ball into the Hibs penalty area and as O’Donovan tried to get on the end of it, he appeared to be tugged by the defender, only for referee Eddie Smith to wave play-on.

Just before the half-hour, Zaluska was forced into his first save when Ross Chisholm let fly with a dipping volley, but the Polish keeper managed to parry the ball over the bar.

With five minutes remaining in the first half, Robertson had another opportunity to put the Tangerines in front.

The ball broke to him at the edge of the box, but once
again he pulled his shot wide, meaning the teams would go in at half-time at 0-0.

Craig Levein’s half-time team-talk seemed to work wonders though, as United came out all guns blazing in the second half.

The home side won a corner in the 46th minute, which nearly led to the opening goal.

Conway’s corner led to an almighty goal-mouth scramble, but somehow the ball stayed out and Hibs cleared.

United were beginning to dominate and won a series of corners in quick succession, without troubling the ‘keeper.

However, their pressure soon paid off when Conway found space on the left to cross for Dods to head beyond the ‘keeper and put the home side 1-0 up after 53 minutes.

Not content with sitting on their lead, United pressed for a second goal and got it on the hour mark.

Gomis won a freekick on the left and the ball was swung in for in-form Sandaza to head past the helpless McNeil and put the Tangerines 2-0 up.

Hibs striker Derek Riordan tried to drag his side back into the game moments later, letting go from fully 25 yards, but Zaluska saved comfortably.

Conway was beginning to run riot down the left wing, whipping in several dangerous crosses. O’Donovan managed to get on the end of a couple of them, only to head over on both occasions.

As the home side chased a third goal, Hibs almost pulled one back when Colin Nish volleyed across goal, only for Dean Shiels to scoop the ball over.

With two minutes remaining, Gomis almost made it 3-0 when he burst through the Hibs defence to find himself one on one with McNeil, only to fire into the side netting.

Hibs were denied a consolation a minute later when Robertson and then Zaluska cleared off the line.

The United midfielder could have rounded off another fine performance with a goal of his own in the dying moments when he danced past two defenders, only to be denied by McNeil.

It finished 2-0, but the Arabs were treated to a feast of attacking football – particularly in the second half – and it could have been more.