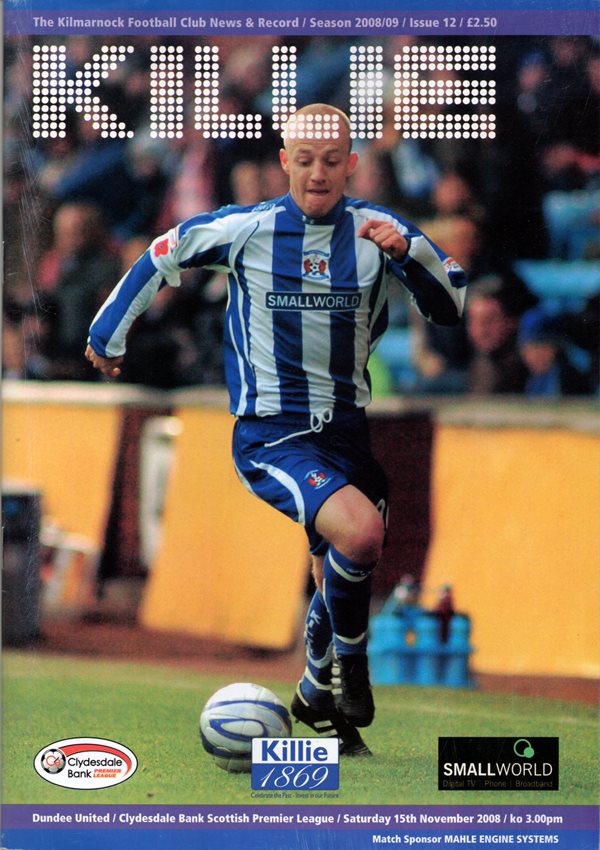 Goals from David Fernandez and Jamie Hamill either side of half-time were enough to end Dundee United’s ten game unbeaten run at Rugby Park this afternoon.

Kilmarnock enjoyed the best of the action early on, with Fernandez and Taouil looking particularly impressive for the home side. The two combined in the eleventh minute to provide the first real threat on either goal, but Taouil’s 20-yard drive sailed over the bar.

Moments later, it was Fernandez who found himself through on goal after a perfectly weighted pass from Taouil split the United back line. Fortunately for the visitors, the former United striker was flagged offside. Former United keeper Combe offered his former side their only real chance of the opening period, after squandering a cross from Dillon. However, Robertson’s drive was deflected away, before Conway blasted his effort over the bar.

Sammon then had a chance for the home side, but his effort was comfortably wide of the mark. Just as the game looked to be heading towards a nil-nil stalemate at half-time, Gomis gave away a penalty after he was adjudged to have fouled Taouil on the edge of the box.

Hamill made no mistake from 12 yards, thumping the ball down the middle to beat Zaluska. United emerged after the break the brighter of the two sides, eager to grab a goal back. O’Donovan came close on 46 minutes, firing his effort across the face of Combe’s goal.

Sandaza then twice threatened to grab a goal back. On 50 minutes, after Dixon found the Spaniard at the edge of the box, he turned to unleash a right-foot drive just wide of the Killie goal. And on the hour mark, Sandaza again came close, this time firing into the side netting after Lee Wilkie tenaciously won the ball inside his own half before feeding the ball through to Sandaza, who weaved past two defenders before coming close.

And United would be left to rue their missed opportunities when Fernandez returned to haunt his old club with a textbook finish. After Sammon narrowly failed to get on the end of Garry Hay’s cross, Dixon failed to clear the danger and Fowler was able to collect the ball and cut it back into the path of Fernandez who drilled the ball home from just inside the box.

Fernandez almost turned provider three minutes later, whipping a cross into United box. But Pascali’s volley was straight into the hands of Zaluska. United were then denied a strong penalty claim, after substitute Willie Gibson felled Jon Daly twice in the box. Swanson and Gomis had efforts on target in the closing stages, but Kilmarnock never looked like surrendering their two goal lead.