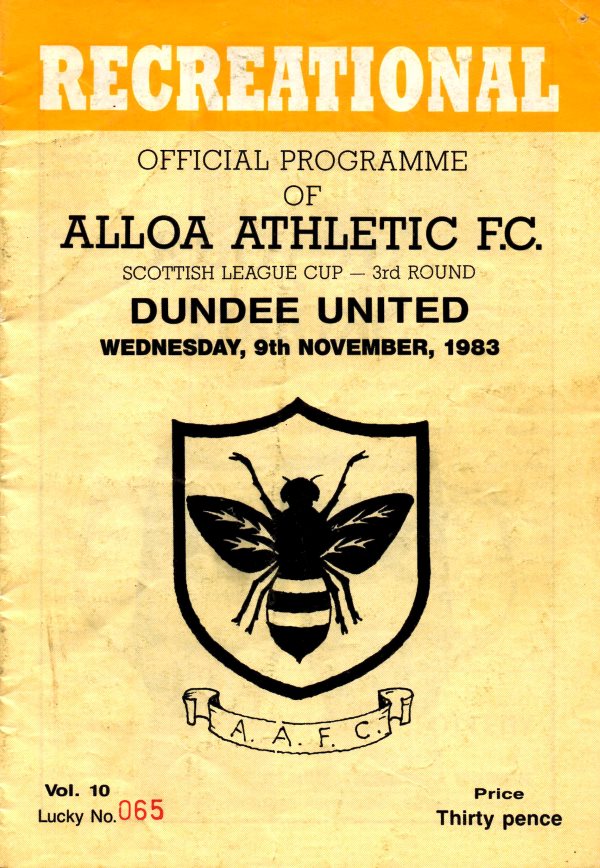 The most important name on the team sheet for United’s visit to Alloa for their Group match in the league cup was not in the starting eleven, instead it was the official confirmation that Jim McLean would be in United’s dug-out following his decision to turn down the chance to become the new manager of Rangers. McLean spent most of Sunday in discussion with the Ibrox club and then Monday contemplating whether now was the time to leave Tannadice. There were rumours that McLean had sought the council of Alex Ferguson and Jock Stein on what decision to make, but despite the offer of a rumoured £70,000 a year salary, McLean decided to stay put. A strong sense of loyalty towards the club who have allowed him to develop one of the best sides in Europe and to his family, who are settled in the area, meant he would not head west.

Speaking at Tannadice McLean said: “If it were purely finance, I would certainly have gone to Rangers…I had to decide whether finance and ambition were more important than the happiness of my family and my loyalty to Dundee United. I had to stay loyal to the fans of Dundee United, because I am one of them.” There has been no sharper illustration of how United, along with Aberdeen, have fundamentally reshaped the Scottish footballing landscape in the last five years, with the fact that McLean and his New Firm counterpart, Alex Ferguson, have turned down the chance to manage arguably, Scotland’s biggest club in the last two weeks. A situation that the Evening Times said reduced Rangers to the status of “also-rans”, a comment unthinkable in Scotland’s post-war footballing conversation.

After the front-page excitement of the last few days, there could be few things more mundane than an evening’s football at Recreation Park where United looked to put a disappointing derby defeat from the weekend behind them. John Reilly came in for Derek Johnstone and Iain Phillip was on the bench for the first time this season.

United started quickly and Reilly made an immediate impact in the third minute, breaking down the right and crossed for Davie Dodds' to head home, with the ball squirming underneath Alloa’s keeper. If United thought the early breakthrough would allow them to dominate, they were wrong when on 15 minutes Drew Paterson was first to the rebound after Willier Garner’s shot was saved by Hamish McAlpine to equalise. The pace of events didn’t slow and John Reilly claimed his seventh goal of the season when he ran onto an Eammon Bannon free kick and placed the ball past the ‘keeper from an acute angle.Five minutes later United extended their lead, Davie Dodds crossed, Paul Hegarty nodded down for Ralph Milne volley home. Alloa would not be cowed and they came within one goal of United at the break when Davie Narey fouled David Lloyd in the box and player/manager Willie Garner converted the resultant spot-kick.

In the second-half United re-established their two goal lead with their own penalty; Bryan Purdie handled a Paul Hegarty header in the 67th minute and Eamonn Bannon converted. Alloa deserved great credit for their performance which forced United to work hard for the 90 minutes, but the hope must be with the period of uncertainty around Jim McLean now at an end, United can find their best fluent football on a more consistent basis and demonstrate that McLean has made the correct decision in terms of acquiring more silverware by turning down the riches on offer in Glasgow.