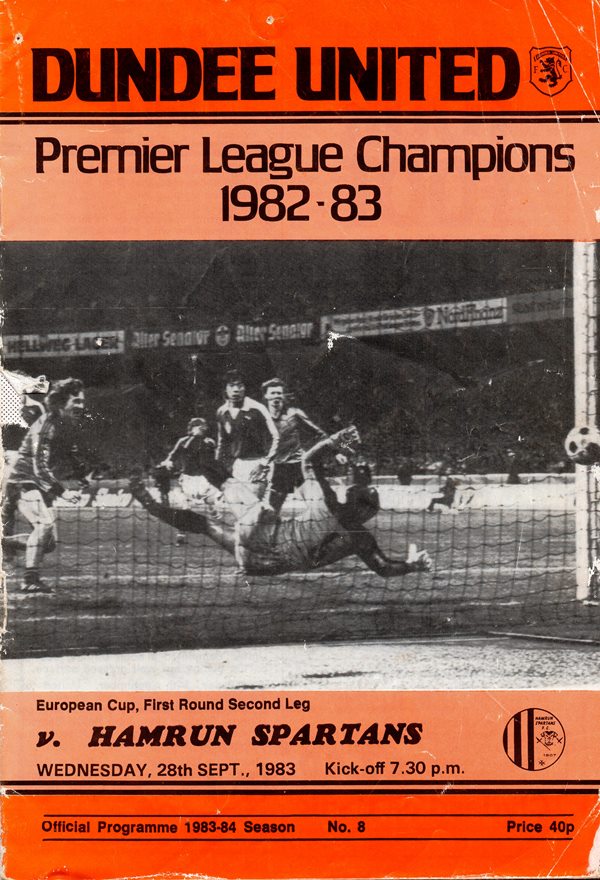 A European night at Tannadice under the floodlights is normally enough to quicken the pulse, but on Wednesday night, there was a little more anticipation in the air as United prepared to make their home debut in the European Cup. Visitors Hamrun Spartans may have lacked the pedigree of previous visitors, and United’s 3-0 win from the first leg had already removed any sense of jeopardy, but their 24th European home tie was still another piece of history to be enjoyed. Jim McLean made a couple of changes from the team that defeated Aberdeen on Saturday, welcoming back striker Paul Sturrock into the line up for the first time this season. McLean said in his programme notes, that with games to come against Rangers and Celtic, he was keen to see his striker get some time on the pitch. Derek Murray also came in for his first start of the season. Maurice Malpas, dropped to the bench from Saturday’s line-up and Davie Narey wasn’t risked with the forthcoming game against Rangers in mind. Astonishingly this was the first game the centre back has missed in 119 matches, stretching back to September 1980.

United lined up in their white away kit, and it was clear the Maltese approach was based on damage limitation. Straight from kick off Hamrun kept ten men behind the ball, however, after the opening minutes it was Spartuns who created the first opportunity. Alejandro Gutman chased a long ball out of defence into the United box and out muscled Paul Hegarty to pull the ball back for the onrushing Michael Degiorgio who unmarked looked set to score, but he somehow side footed the ball harmlessly into space. In the 27th minute Davie Dodds had the first clear cut chance for the hosts when Bannon crossed from the left and found him unmarked on the six yard box, but the Scotland striker’s header was blocked. A minute later United made the breakthrough. Bannon’s corner was hit on the volley by Ralph Milne at the edge of the box which took a deflection in front of the goalkeeper and bounced into the net. Bizarrely, the Maltese keeper was later booked for time wasting over a goal kick. With a minute to go before half time defender Edwin Farrugia was also yellow carded for a late tackle on Sturrock. Following a first leg where some of the treatment United received was inexplicably indulged by the referee, it was reassuring that tonight’s official, Jack Poucher from Northern Ireland, was not going to be so lenient. From the subsequent free kick United doubled their lead through Billy Kirkwood who has been enjoying a profitable spell in front of goal so far this season. Milne’s free kick was headed back out to Kirkwood, who from 25 yards out shot first time into the collection of six Hamrun defenders who had crowded the box. Inevitably the ball took a deflection and wrong footed the visiting keeper to settle in the net.

At the start of the second half United quickly made it three. Bannon’s cross from the left was dropped by keeper Charles Brincat and it fell to Dodds at the far post, but the striker, off balance and leaning back could only swing his left boot at the ball and send it spinning back across the goal where Ralph Milne, hovering on the byline at the post tapped the ball home, possibly played onside by a defender on the goal line. This was Milne’s 9th goal in 14 European fixtures, making him United’s all time leading goalscorer in European competition. On 57 minutes Sturrock was taken off, to be replaced by Graeme Payne. Injuries and the form of Bannon and Milne have effectively reduced the popular winger to a supporting role in the last three seasons, but his arrival on the pitch for the last thirty minutes was warmly welcomed by the home fans. With minutes to go United had one last significant chance when another Bannon corner to the edge of the box was met full on the volley by Milne, but his goal-bound effort was cleared off the line.

United’s progress to the second round was never in doubt and this perhaps contributed to the low key nature of the affair. Their undefeated start to the season has now been extended through September, but a more serious challenge awaits with Rangers calling at Tannadice on Saturday. Whilst their league form has been poor, Rangers passed their own Maltese examination on Wednesday, defeating Valletta 10-0 at Ibrox in the Cup Winners Cup.

A fortnight ago. In the national stadium, Malta, another chapter In the club's history opened as we made our debut in the European Cup. Everyone at Tannadice is very excited concerning our participation in the premier European tournament, and after a fairly long apprenticeship in the U.E.F.A. Cup, we are extremely hopeful of a lengthy run in this competition. There was a time when I believed that there was no such thing as an easy tie In Europe, but I have to be honest and say that our pairing with Hamrun Spartans must rank as the least demanding I have experienced in nine European campaigns since joining the club almost 12 years ago. In saying that, I have no wish to offend the Hamrun officials, who were so amiable and went out of their way to ensure our stay in Malta was a highly enjoyable one.

Tonight, you will possibly witness a new concept in defensive football. I expect to see all eleven Hamrun players not only in their own half but, at times, encamped in their own penalty area. Hopefully my assessment will prove to be wrong and Hamrun will come to make this evening's tie an enter. taining one for everyone here. Unfortunately, success for Maltese clubs in Europe is based only on the respectability of the final scoreline. At the time of penning these notes it is our earnest hope that Paul Sturrock will be fit enough to take pan at some stage of tonight's match and thereby put an end to the run of bad luck with injuries that he has experienced since the start of the season. After a relatively easy openihg to the season, staning last Saturday at Pittodrie we face a demanding and challengfrig programme with Rangers and Celtic our next league opponems. A fully fit Paul Sturrock would, therefore. give everybody a welcome boost for what, even at this stage of the season, could prove a vital period in the defence of our title. In extending a warm come to Hamrun Spartans, I trust they will enjoy their visit to Scotland equally as much as we did in their country. Unfortunately, we cannot guarantee similar temperatures but hopefully we will match the hospitality afforded to us by Hamrun in Malta.