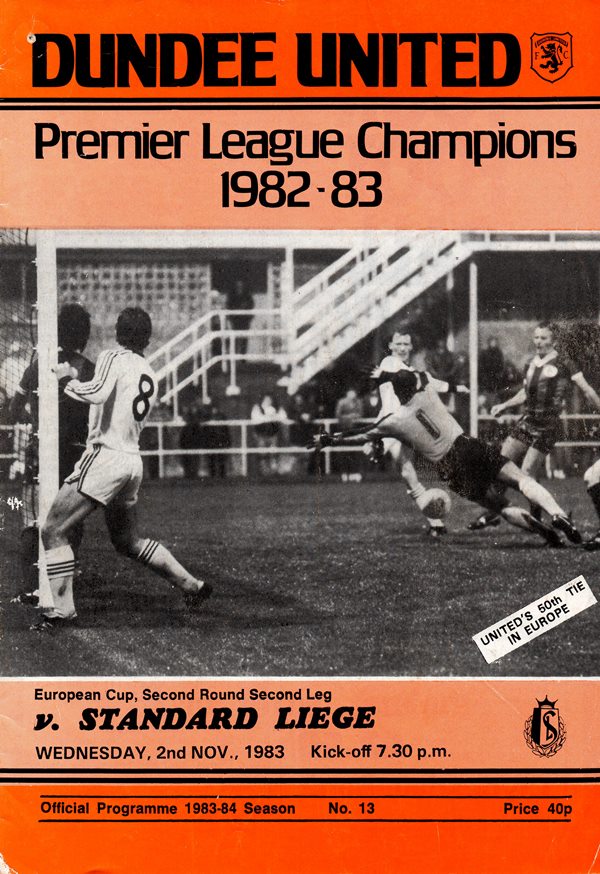 United have produced performances of such quality and imagination against some of the biggest names in Europe so frequently in recent years, it would be easy to take them for granted. Tonight, United added yet another signature performance to the collection, with a 4-0 dismantling of Standard Liege which was so impressive it left legendary Standard manager, Raymond Goethals, to conclude that Jim McLean’s side must be considered as potential European Cup winners. Tannadice was heaving with one of its biggest attendances of the season, as nearly 17,000 crammed in to see if United could build on an accomplished first leg performance in Liege. Recent signings Derek Johnstone and Tommy Coyne were ineligible so Ralph Milne was brought back into the starting line-up following some criticism from McLean for failing to reproduce his best in recent weeks. Richard Gough was fit enough to start, after coming off injured in the 2-2 draw against Motherwell at the weekend. Standard were without the injured Horst Hrubech, but given the quality of his performance two weeks ago, that could hardly have been seen as a problem for the Belgians. McLean said United’s progress would depend on the ability of Milne and Eammon Bannon to take the play to the Belgians. There was no doubt that the thrill of a European night under the floodlights inspired both, but especially Milne, who authored much of United’s finest work. The Belgians simply could not contain him.

United started strongly, harrying Standard who set up to defend their own half with a packed midfield relying on their Dutch international Simon Tahamata on the break. Standard were nearly undone on 11 minutes when John Holt intercepted a loose pass in the midfield to quickly release Davie Dodds one-on-one with the keeper Michel Preud’Homme, but the striker screwed the ball wide. In the 22nd minute, United were forced to make a change when Derek Stark went off injured for John Reilly, but this did not interrupt the flow of the game. After 26 minutes Bannon chased down the Standard full back Zoran Jelikec, winning possession on the by-line and cutting back onto his right foot, he crossed into the box where Ralph Milne had created enough separation from his marker to head back across Preud’Homme to score. Right on the stroke of half-time, Ralph Milne claimed the crucial second goal. Richard Gough layed the ball back to Holt, who sent an inch perfect cross over the Standard back line to Milne who timed his run beyond the defence to perfection and then deftly chipped the ball over the onrushing Preud’Homme.

At the start of the second half, Milne should have claimed his hat-trick after he left four Standard defenders in his wake, dribbling into the box, but his shot just dipped over the bar. Then in the 51st minute, Milne, again, floated a corner onto the head of that most reliable of European scorers, Paul Hegarty, who scored his eighth European goal, outmuscling his marker to head into the net. Davie Dodds made up for his earlier miss in the 68th minute thanks to a well constructed goal. Bannon slalomed past four defenders before playing the ball to Milne who released Gough down the right and his low cross into the edge of the six yard box was prodded home by Dodds for his 12th of the season.

Standard were unable to compete against a United side that played with confidence and complete conviction. Their goals encapsulating everything we have come to expect from them under McLean: pressuring the opponent, excellence and imagination on the ball whilst clinical in front of goal. Goethals’s observation that United must be considered as potential winners did not seem so far fetched, and who knows where this performance will rank in years to come if the Tannadice men are to continue their assault on Europe’s premier trophy.

*The draw for the quarter-finals will take place on December 8th where United will be joined by Liverpool, AS Roma, Dinamo Minsk, Dinamo Berlin, Dinamo Bucharest, Benfica and Rapid Vienna, who knocked out United’s conquerers in last season’s UEFA Cup, Bohemians Prague on away goals.

Hardly surprisingly the major talking point in Scottish football recently has been the resignation of Rangers' manager John Greig. I viewed with sadness the pictures in the papers of his family. Most people don't realise the effects of events on the park have on those closely associated with a football manager. For example. we all share the problem that bad results have on our children, especially in their early teens when they are liable to take stick from their school friends. Irrespective of the financial rewards and glory that success can bring, one sometimes wonders if at the end of the day it is all worth while. Football is, however, a drug and most of us stay the course even in the realisation that the threat of the sack, resignation or whatever is constantly with us but nobody faked the end with more dignity than John Greig. I have my own problems here at Tannadice and I don't wish to be presumptuous but perhaps had John Greig's players given him similar backing ~ as he accorded them, then the end result may have been different.

Since winning the League our travelling support such as was on view at Motherwell has shown a vast improvement and is greatly appreciated. I only hope the addition of Tom Coyne together with the potential of Dave Beaumont, John dark, Gary McG'nnis and Alex Taylor will eventually give the necessary competition for midfield and forward p'aces. Too many players in these positions have in the past just had to be picked. Hopefully, in the future, these players can be stimulated by even omitting them from the first team. Once again tonight brings another big European occasion to set the adrenalin qoing. Sometimes it is the Scottish nature which poses the biggest dangers on occasions such as this. We need onlv reflect on what happened against Bohemians Prague. Standard will prove a tough nut to crack with their expertise in possession football. They are also past masters of counter attacking on the break. So once again I repeat that we must keep calm except when our ooponents have oossfission. I will be looking for some of the poise we display away from home so that we can emulate the good results achieved on foreign soil. Our main worry at the time of writing concfirns Richard Gough. He is vital to our plans. We are already deprived of the services of one international in Paul Sturrock. The loss of another would turn a difficult task into an enormous one.