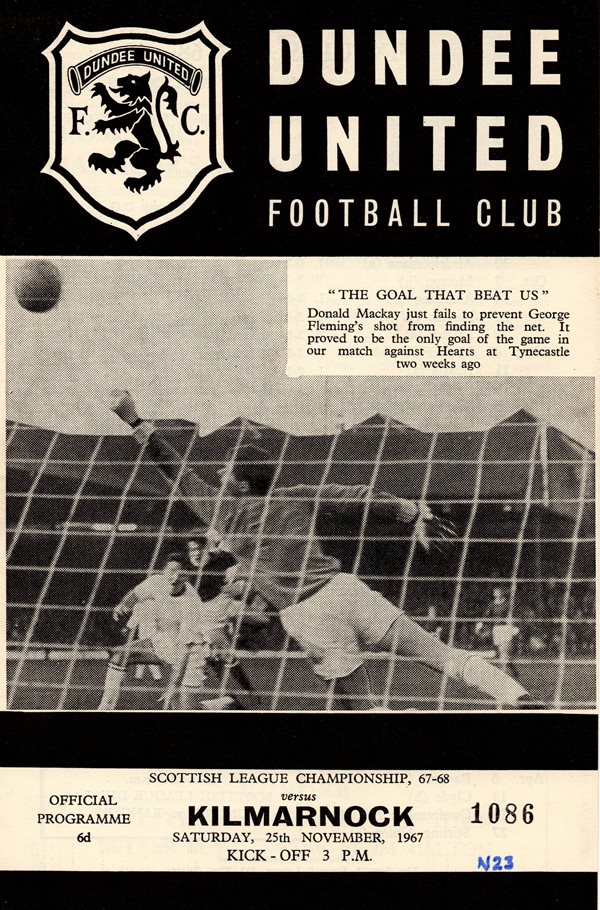 Until Killie's recent return to the Premier Division which has seen the men from Rugby Park remain undefeated in their last four visits at Tannadice, Tannadice was a far from happy hunting ground for the Ayrshire side. But that only became the case after the advent of the Premier Division and indeed, following United's promotion, in 1960, Killie were very much a bogey side in the days when Jerry Kerr was manager.

In 14 meetings prior to Killie's visit in November 1967, United could claim a solitary victory since promotion. United's form at that time was mid-table respectability with just three defeats in 11 outings. Too many draws (5) and a scarcity of goals, just six in the last seven games meant United fans couldn't be over-confident of posting a further victory over a side who were proving a tough obstacle to surmount. However, Killie were not faring any better that season. They lay a point behind United and had only found the net twelve times in their eleven outings. More depressing was the fact that Tannadice fans hadn't seen their team win at home for seven weeks, although that was tempered by the return of Finn Seemann and Billy Hainey in a 5-1 midweek Dewar Shield Final victory over St Johnstone.

Recalled to the side for that game was centre-forward Billy Hainey. He had spent most of the season in the reserves, and had been transfer-listed. However, his two goals against St Johnstone in a new look forward line which also saw the return of Finn Seemann had pleased Jerry Kerr who stuck by the hvelve on duty against St Johnstone. Saints as United tried to improve upon their poor record against Malky MacDonald's men. In the pre-match prospects for this encounter. The Courier stated, "But the traditional Terror performances have been lacking at home."

Well, United's performance that November afternoon was to be the perfect riposte to the allegation that United lacked their usual dig. Finn Seemann dazzled in his new midfield role. Consistently, he ripped the Kiltie defence apart. It was, however, the other recalled man who carved the opening for United's first goal in ten minutes. After some great build up. Billy Hainey worked hard to find the opening from which Ian Mitchell slammed the ball through the legs of sandy McLaughlin after only ten minutes. United sporting their all-black attire pressed constantly until the interval, but had nothing more tangible to show for all their pressure. Curiously, United sagged dreadfully after the break, allowing Killie to equalise just before the hour mark. Appeals for offside were half-hearted as United's defence stood flat-footed to let Eddie Morrison slide the visitors back on level terms. There was no doubt about the legality of United's second - Finn Seemann's effort giving the keeper no chance whatsoever after 66 minutes.

But again slackness in the home defence cost another goal within a minute of having gone ahead. They back-peddled in the wake of a run by Tommy McLean, although there was more than a slice of good fortune about his goal as his shot was deflected up into the air off Jimmy Briggs boot and sailed over the head of Donald Mackay. United finished the game as they had begun it, well on top and justice was done 14 minutes from the end when Billy Hainey netted a goal worthy of winning any game. And it was a case of jeers turning to cheers for the striker who had endured a sticky second period as Billy Hainey crashed home what proved to be the winner. Before the end Davie Wilson hit the post with a wonderful shot and United had to be content with a single goal victory, although their superiority, particularly in the first half, deserved more. Hainey may have been the hero for scoring the winning goal, but the contribution of Finn Seemann in his new midfield role was a decisive element in United recording, a then rare success, over Kilmarnock.