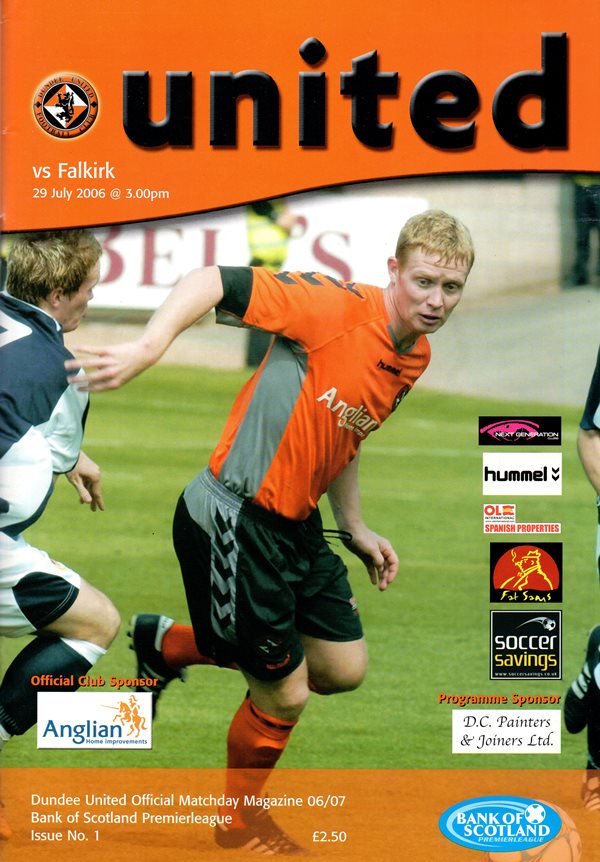 A second half goal by youngster Liam Craig proved to be the goal which gave the points to Falkirk this afternoon in the season opener at Tannadice. Barry Robson had fired United into the lead with a curling right foot effort before Russell Latapy equalised with a free kick seven minutes later.

United – without Garry Kenneth and Greg Cameron who were on duty with the Scotland Under-19s – started with the core of the side which they have used in the pre-season friendlies, with captain Barry Robson again starting at left back. Up front, Craig Brewster preferred himself ahead of Lee Miller to partner new signing Noel Hunt.

Falkirk meanwhile had to do without the suspended duo of Patrick Cregg and Stephen O’Donnell, and also the injured Densil Theobold. New signing Scott Higgins started the match in goal for the Bairns, with fellow goalkeeper and new signing Jeroen Lambers taking a place on the bench.

The visitors started the game the better, looking composed in possession and with Trinidadian Russell Latapy finding a lot of time on the ball, and Moutinho and Gow both had shots on target inside the first twelve minutes which forced Stillie into action.

Despite being well behind on possession, however, it was United who broke the deadlock in the seventeenth minute. Mark Kerr showed great awareness to play the ball into space on the left for Barry Robson.

The United captain cut inside and tried to shoot right footed, but didn’t get a good connection and after the ball was slid away by Dodd as Hunt closed in, it came back to Robson on the edge of the area, who curled in a great strike right footed from the edge of the box.

David McCracken took a knock to the head a couple of minutes later, which required stitches, and it was while he was off the field that Falkirk drew level. Less than a minute after Moutinho had seen his strike disallowed, the Bairns won a free kick for Robb’s foul on Gow. Russell Latapy stepped up to strike a powerful effort on goal, and although Stillie got a hand to the shot, he couldn’t keep the ball out of the net.

Once the scoreline had been levelled, the game drifted back into the same pattern as before, with Falkirk doing most of the probing, and United looking to create something on the counter attack.

Conscious of the space Falkirk were getting in midfield, United changed things round ten minutes into the second half, with Lee Miller replacing Craig Conway, and Brewster dropping into an advanced midfield role.

However, the crucial third goal came on 59 minutes for Falkirk, with Russell Latapy again the architect. Falkirk found an abundance of time in possession on the edge of the area, and Latapy eventually played a through ball to the left side of the area, where Liam Craig picked up and fired a low shot across Stillie and in off the far post.

United struggled to get back into the game, with the Bairns looking confident and comfortable in possession. Samuel and Robertson came on to replace Hunt and Brewster, and after Duff headed wide of the near post, United mounted a late assault on the Falkirk goal.

Miller headed wide from Robson’s corner on 73 minutes, before Collin Samuel twice went close in the final minutes, first forcing Higgins to parry at the near post, then seeing his shot touched onto the post by the Falkirk debutant in the final minute after doing wonderfully to stride past the challenge of three Falkirk defenders.

It was not to be for United though, and Falkirk held on to secure the points.