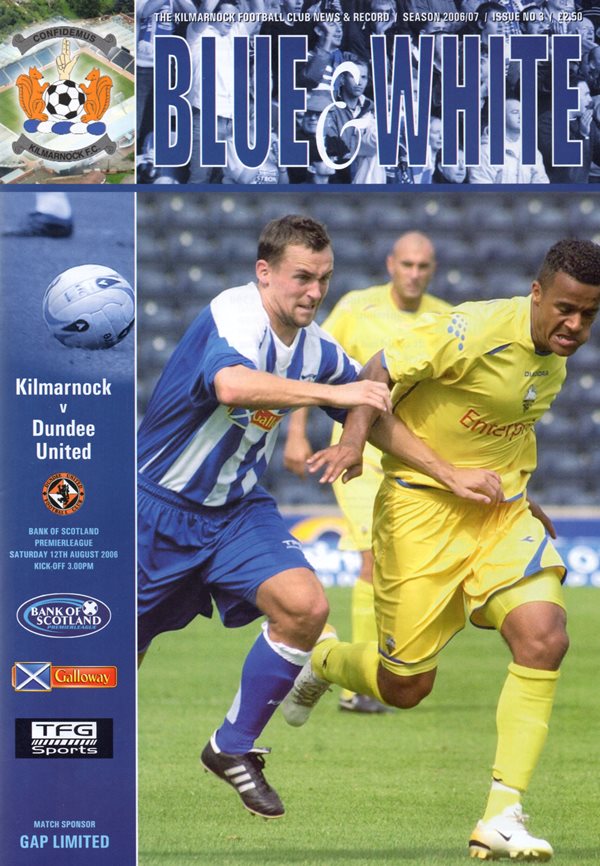 United’s first clean sheet under Craig Brewster earned the ten-man Tangerines a creditable point against a physical Kilmarnock side at Rugby Park this afternoon. After dominating much of the first half, United faced a sterner challenge when Lee Miller was shown a second yellow card six minutes from time after his arm caught Frazer Wright as the two challenged a high ball. A steely second half performance defensively, in which Stillie was never really troubled, ensured United would take something from the game, and Noel Hunt almost grabbed a winner on the break ten minutes from time.

Still without the injured Alan Combe and Simon Ford, Jim Jefferies made one change to the Kilmarnock side which started last weekend’s 2-1 victory at home to Hibs, with Gary Wales coming in at the expense of Paul di Giacomo.

United’s side also showed one change from the starting eleven last Saturday, with Lee Miller given a starting position in place of Noel Hunt, who had missed some training with a virus at the end of the week and dropped to the bench. Hunt was fit enough to take a place on the bench, alongside new signing David Proctor who finalised his transfer from Inverness Caledonian Thistle yesterday.

The game started at a slow pace, with both sides sizing each other up without really threatening. Lee Miller got a talking to after a late challenge on Allan Johnston early on, before Barry Robson dragged his long range effort wide on 8 minutes. After his early lecture from Stuart Dougal, Miller was to see the yellow card in the 10th minute after a fairly innocuous foul on Wales as both players contested a 50-50 ball inside the Killie half.

Robson flashed a header over Smith’s bar from a Mair cross in the 15th minute, before James Fowler had to get back inside his own penalty area to get in ahead of Stuart Duff to meet Samuel’s nod back across the area from Robson’s cross. United’s captain was causing no end of problems for the Kilmarnock defence as United started to dominate, and after turning Greer in the area, Robson again shot, but his right foot effort from 14 yards was straight into Smith’s arms.

The Tangerines saw the quality which Steven Naismith possesses in the 25th minute, when the youngster sent a 30 yard shot on goal, but Stillie got across to tip over the bar well. Frazer Wright then missed perhaps the best chance of the first half four minutes later, heading Hay’s corner over the bar from 6 yards out with a clear sight of goal.

After Robson had again tried his luck from long range in the 37th minute, seeing his long range shot go wide after cutting inside Greer, United found themselves down to ten men 6 minutes from half time, after Miller was sent off for a second cautionable offence.

Contesting an aerial challenge with Wright, Miller raised his arm caught the defender in the face. Despite the protestations of the United players that contact had been unintentional, Stuart Dougal showed no hesitation in sending off the United striker.

Invincible stabbed a shot wide two minutes before the break, as United sought the half time break to reorganise.

Noel Hunt replaced Stuart Duff at half time for United as they regrouped for the second half, and the United side looked well organised as the half progressed, with Kilmarnock struggling to break them down.

Stillie’s long clearance just after the hour was flicked on well by Hunt onto Samuel at the corner of the penalty area, but the Trinidadian elected to try and beat the defender instead of squaring the ball back to Hunt with a shooting chance, and lost out as Wright and Hay managed to clear.

The home fans were becoming increasingly frustrated at their side’s attempts to press home their one man advantage, and Invincible had two headers from the edge of the area which Stillie dealt with comfortably.

David Proctor came on to make his debut for United in the second half, and United almost nicked full points ten minutes from time, as Cameron slipped the ball through for Hunt in the right channel, but the striker’s shot from the angle 14 yards out bounced agonisingly off the wrong side of the far post with Smith beaten.

In the closing stages, Christian Kalvenes recovered superbly to clear from Naismith as the striker snuck in behind the defence and was bearing down on Stillie.