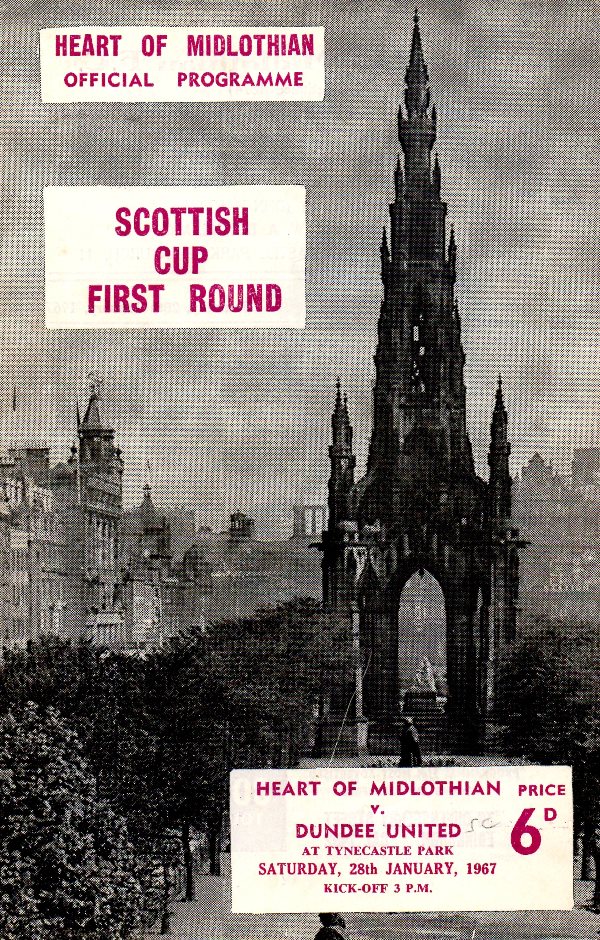 Before this season's pairing, almost exactly 30 years had elapsed since United's last Scottish Cup tie with Hearts at Tynecastle. The 28th January 1967 was the day that Scottish football was rocked, but it wasn't events around Gorgie that reverberated across the nation, because 50 odd miles further south, Berwick Rangers carved out their page in the folklore of cup football by knocking out their rather more illustrious namesakes from Glasgow! Albeit that United had never won a cup tie at Tynecastle, their record against Hearts and form that season had swung the odds in favour of a Tannadice success, but few could have anticipated just how comfortable victory would be.

The league form of the conquerors of Barcelona had, putting it mildly been inconsistent and had included a 2-1 defeat by Hearts at Tynecastle in the league. To further spoil United's build up to the game, the speedy Swedish winger Orjan Persson was very doubtful for the game, whilst word from the Edinburgh camp was that a variation on the new 4-2-4 formation would be utilised by Hearts boss John Harvey. But United travelled to the capital armed with the knowledge of the Maroon's line-up which was announced on Friday - a luxury one could hardly envisage nowadays!

The surprise in their starting eleven being inside forward Alan Gordon playing at centre forward. Meanwhile Jerry Kerr was keeping his cards closer to his chest. Quite apart from the question mark over the fitness of Orjan Persson, the Tannadice boss had one other tactical ploy in mind. And he was confident of a United victory even although he must have known that Orjan Persson would not play, boldly stating, "We're looking for a win. When it came to the crunch, the terrific teamwork of the eleven in black and white triumphed over the experimental formation adopted by the home side.

The floating roles of Alan Andersen and Allan MacDonald not only failed to come off, but actually simplified matters for the experienced United rearguard! The writing was on the wall for Hearts right from the early stages as the United attack sliced through the Hearts defence as Denis Gillespie and Tommy Neilson called the tune. Yet it took a bad defensive blunder by the home side two minutes from the interval before United eventually forged ahead. Danny Ferguson was way short with his attempted passback to 'keeper Jim Cruickshank and Finn Døssing gratefully swept the ball into the net from the left-hand side of the six yard box. That reverse stung Hearts into retaliation as the second half got under way, but their efforts lacked the composure to unsettle a rock steady United defence. And ten minutes into the second period, the task facing the home side assumed mountainous proportions as United grabbed a second in a simple and straight forward manner. Billy Hainey pushed the ball through the middle and deadly Dane Finn Døssing did the rest brushing past Thomson to coolly side-foot the ball past the advancing Cruickshank.

John Harvey implimented all sorts of positional changes which brought renewed hope, with Alan Gordon heading narrowly over and Sandy Davie finger-tipping a Kemp 25 yarder just past. But for the most part Sandy Davie in goal or Lennnart Wing in defence absorbed what little other pressure the Maroons could muster. At the other end. United were turning on the style. So it came as no surprise when a third goal was scored three minutes from the end. Finn Seemann's free-kick from the right touchline found Ian Mitchell in the inside-right position and he cracked home a tremendous angled shot past Cruickshank. Whilst Hearts were left to contemplate a season which finished before the end of January, United were still interested in two knock-out competitions with Juventus to come in the Fairs Cup. There was to be disappointment in both, none more so in the Scottish Cup because a Tommy Millar own goal the only one conceded in the competition - was to end hopes of a first final appearance evaporated in front of 41,000 at Dens Park in the semi-final against Aberdeen.