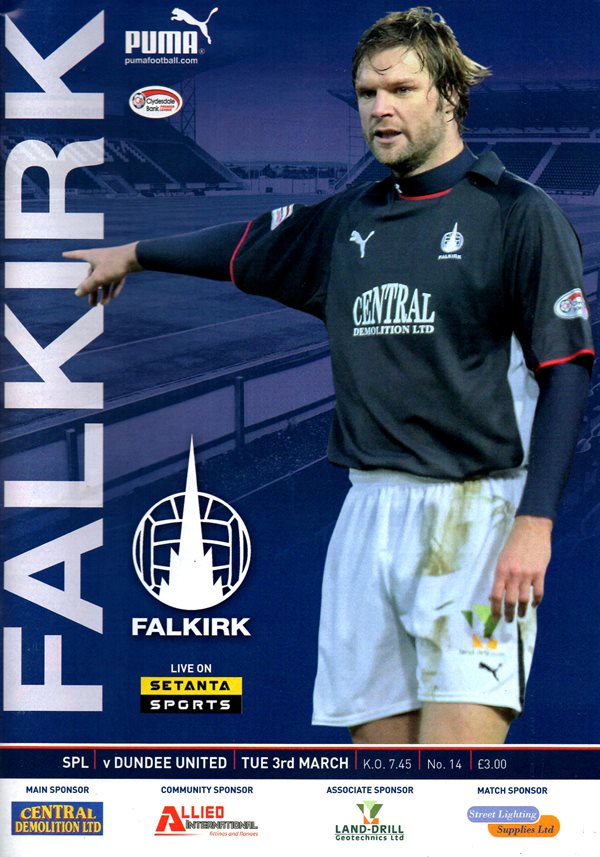 A dominant performance saw United leave a cold, wet Falkirk Stadium with all three points after Craig Conway successfully converted a first-half penalty following a bizarre Tam Scobbie handball. It was the third penalty United have had in three games and Conway’s composed finish wiped Sandaza’s miss against Hearts from memory.

United started the game with real intent and the first 45 minutes resembled more of an 11-man version of training ground keep ball. Dominating from the start, United were the first to have a sight of goal. David Robertson got himself into the right place at the right time after two minutes but he failed to strike cleanly at the back post and Prince Buaben’s follow-up shot was deflected wide. Three minutes later, Morgaro Gomis ran powerfully through the middle but dragged his 20-yard shot wide.

On ten minutes, United came even closer. Conway was unceremoniously fouled by Lee Bullen and, from the resulting free kick, Lee Wilkie headed back across goal from the back post but no United player was able to get the vital touch to divert it goalward.

The home side were struggling to get into the game and had to wait until the 15th minute for their first chance. Lee Bullen pushed forward down the right and put in a dangerous low ball across the penalty box. Steve Lovell had found himself some space but he scuffed a poor shot wide.

United went ahead after 27 minutes. A good run from Paul Dixon down the left allowed the young full-back to put in a deep cross. With Conway lurking, Scobbie suffered a rush of blood to the head and clearly handled the ball to keep it out of the United man’s path. Referee McDonald immediately pointed to the spot but took no further action against the Falkirk defender. Up stepped Conway himself to take the spot kick and, with the bright lights of Grangemouth as a backdrop, the refinery was in his exquisite low right-foot shot that nestled in the bottom corner of Dani Mallo’s net.

Ten minutes later, Conway very nearly had a second. Mihael Kovacevic played a wicked ball into the box and Mallo had to be alert to block Conway’s goalbound flick.

The final chance of the half fell once again to United. Beautiful interplay between Conway, Caddis and Robertson saw the latter nod it over the defender into the path of the former but the goalscorer’s driving shot was parried by Mallo and cleared to safety.

After an anonymous first half performance, Falkirk started the second half with all guns blazing. However, the first clear chance fell to United with a neat move ending with Gomis slipping the ball into Sandaza who dragged his low shot across goal and narrowly wide. Two minutes later, a Wilkie header from a Conway cross to the back post went just wide as well.

United should really have gone two up after 65 minutes. Again Craig Conway made space for the cross and this time he picked out Paul Caddis in acres of space. Disappointingly, the on-loan man’s header from 10-yards out was weak and easily gathered by Mallo.

At the other end, United had Zaluska to thank for keeping them in the game. He managed to get down low to push a Bullen header away after 66 minutes. Three minutes later, however, Zaluska was nearly at fault. He made to come for a Bullen cross but then decided to leave it. This allowed substitute Mark Stewart a header at an empty net and, as the home fans rose to acclaim the equaliser, he somehow bulleted it past the far post.

That was to be Falkirk’s best chance of the match although they continued to press United. It was all hands to the pump as the home side threw everything they had at the United defence. However, it stood resolute against corner after corner. Indeed, it was United who had the final chance of the game from a counter attack. Conway swung another excellent cross into the box and this time Darren Dods headed just wide at the back post with Mallo beaten.