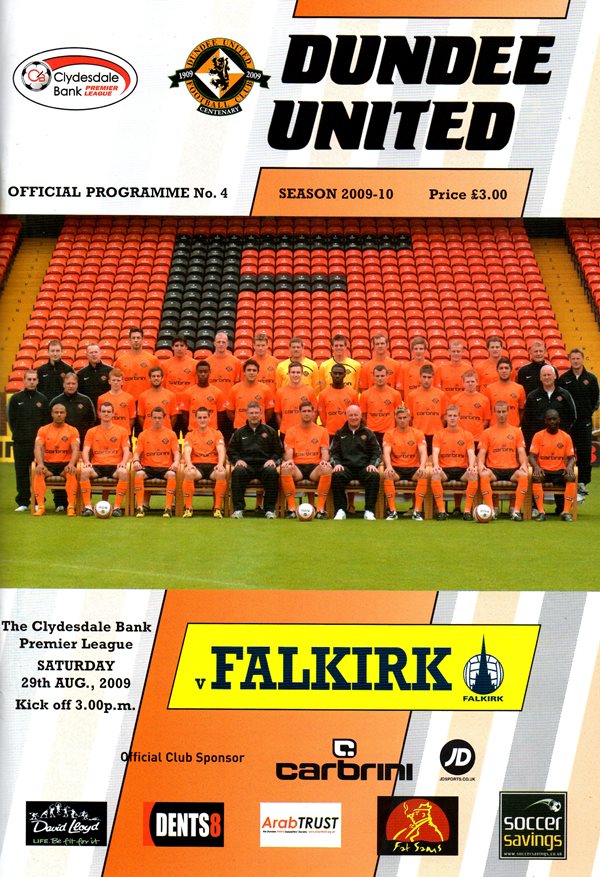 Dundee United welcomed Falkirk to Tannadice for their third match of the SPL season knowing that a win would give them the best start to a league campaign in a decade. Arabs would have to cast their minds back to 1999 to recall the last time their side notched up seven points from the opening three matches. Craig Levein made four changes to the side which had beaten Alloa in the League Cup on Tuesday with Cadamarteri, Weaver, Andy Webster and Danny Swanson returning at the expense of Shala, Banks, Kenneth and Conway, with the hope that a full strength side would be enough to continue an impressive start to the campaign. Falkirk’s new loan signing from Norwegian outfit Sandefjord, Kjartan Finnbogason, who came through the ranks at Celtic, would make his debut for Eddie May’s side after receiving international clearance in time to play.

The first threat on goal came from the hosts on the 10 minute mark, as Andy Webster’s wicked right footed drive was parried away by the keeper. Danny Swanson then tried his luck from outside the box as his looping effort teased towards goal and looked set to creep over the backtracking Olejnik, but the big ‘keeper was able to flick the ball over for a corner. With around a third of the opening period gone, Falkirk mustered up their first threat in the United half. Finnbogason was the target for a low sweeping corner, and as a goalmouth scramble ensued the big striker unleashed a fierce effort towards Weaver’s goal from close range. But the left foot of Dixon was enough to block the shot. O’Brien had a go for the visitors on 24 minutes, but his low drive from outside the box zipped well wide of Weaver’s right-hand post. Danny Swanson then had a hat-trick of chances in the final ten minutes of the opening forty-five for United. On 35 minutes he charged through the Falkirk defence and blasted the ball straight at Olejnik, who could only palm the stinging effort into the path of Goodwillie. With the keeper struggling to get back to his feet in time and the net gaping it looked as though Goodwillie would grab his first league goal of the campaign but it was striker Carl Finnigan in the right place at the right time to foil his attempt - blocking the goal-bound shot out for a corner. Swanson then came close to converting a dangerous ball from Dixon out wide on the left but couldn’t get enough on the ball to steer it on target. United were given a free-kick on the stroke of half-time, after Scott Robertson was pole axed at the edge of the box but Swanson’s effort was flicked over the bar by the Falkirk wall. It would prove to be Robertson’s last action of the match, as he limped off at the break to be replaced by his namesake, David.

Burton O’Brien’s perfectly weighted pass cut open the United defence, and as Ryan Flynn charged towards goal the Bairns looked certain to grab an unlikely lead. But former Charlton and Manchester City ‘keeper Nicky Weaver was on hand to deny the striker, as he spread himself superbly to smother the effort. Crucial saves like this have already endeared the short-term stopper to the home fans. Eddie May’s side would be left to rue this opportunity as the home side then raced up the other end and took the game by the scruff of the neck. Danny Swanson whipped the ball in from the left flank to find Danny Cadamarteri at the back post and the imposing striker converted his, and United’s, third goal of the campaign with a superb finish from a tight angle. United doubled their lead on 56 minutes, with Swanson once more the provider. His neat pass put David Goodwillie through on goal, and the young striker made no mistake and drilled the ball home from the corner of the box. Things then went from bad to worse for the visitors when a misplaced back pass from O’Brien saw defender Thomas Scobbie and Austrian ‘keeper Robert Olejnik clash at full pelt in a scary moment as players from both sides frantically waved on medical staff. Both players were down for some time needing treatment after the horrific collision, and Scobbie would be replaced by Chris Mitchell after receiving treatment from the paramedics on hand. With 15 minutes to go, United looked to be controlling the game and heading towards a third consecutive clean sheet until Kjartan Finnbogason grabbed one back for the visitors, although there was decent claim for offside from the United defence. Finnigan’s through ball left the big striker one-on-one with Weaver, but the Englishman couldn’t foil the attempt this time as the new signing stroked the ball home. Falkirk could, and really should, have made the closing stages of the much more uncomfortable for the hosts, but United were able to stifle any attacks that came their way. There was one heart-stopping moment for the home fans well into stoppage time, when substitute Daniel Marceta played the ball across the face of the United. Fortunately for the majority of the 7,000 fans in attendance, the ball was just half a yard too far in front of the incoming Finnbogason, who could have marked his debut with a brace 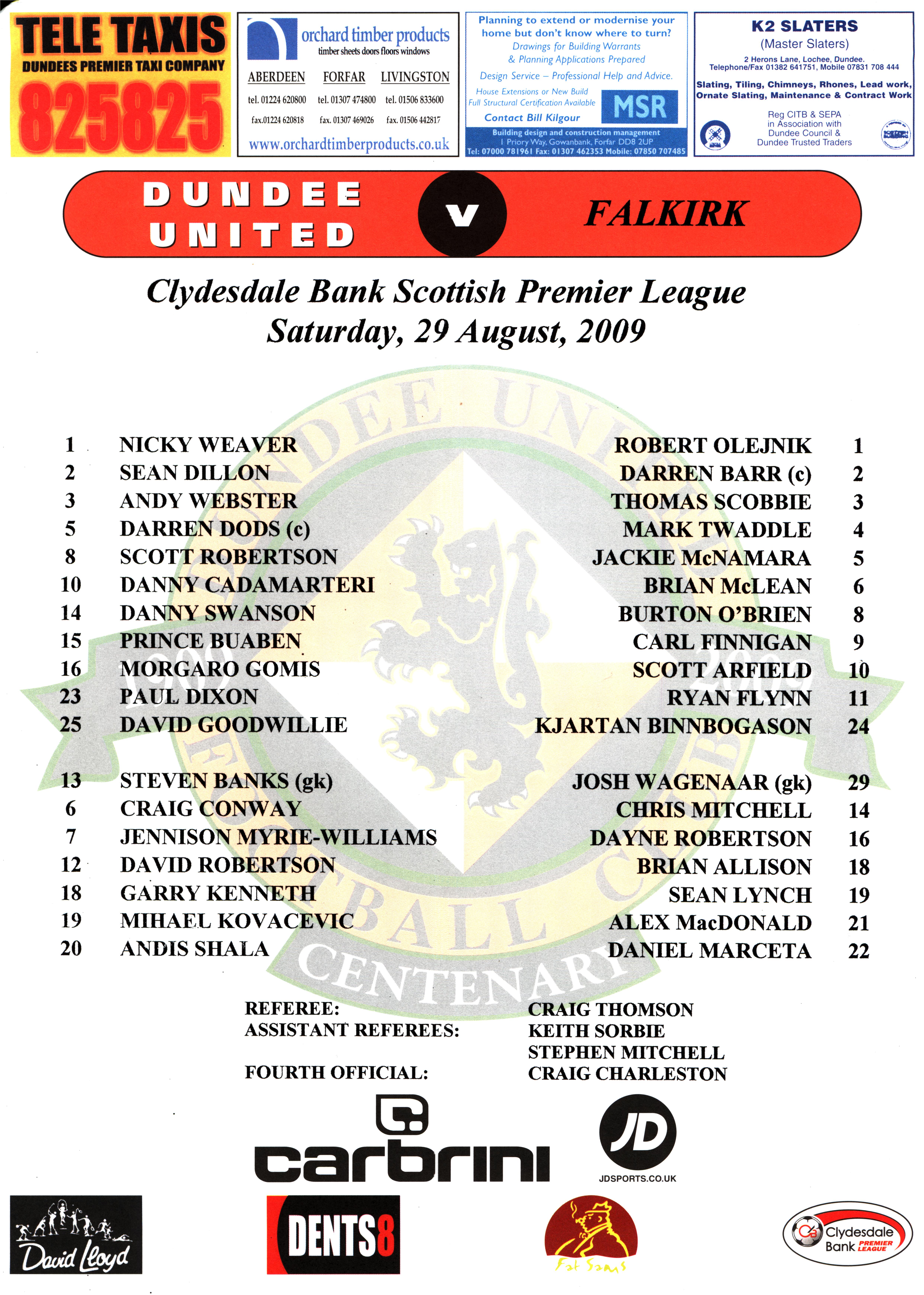 Although pleased with the way things went in preseason, until you start playing competitive games, you are never really sure where you stand. But overall I am happy enough to have picked up four points from the first two games, particularly as we won the Hearts game. There was a lot of pressure on the boys after the way we started last season. But they showed a positive mental attitude to the whole thing and took the game to Hearts from the start, and although Hearts did have scoring opportunities, I felt that we deserved to win the game. It was a good start and something we certainly didn't manage twelve months ago. And whilst only drawing at Paisley Last week, we always knew it was going to be a hard game. It was their first game of the season and Houstie and Gaz had watched them against Easter Road and up until they went down to ten men, Saints were the better side and had chances. And despite playing all bar 15 minutes with ten men, they only lost 2-1, and eventually it might prove that it wasn't a disaster to only take a point from our first visit to St Mirren Park. Once again I couldn't fault the lads for effort and never looked like losing a goal. We were pretty compact the whole team worked really hard. Danny Cadamarteri played with a throat infection, and in hindsight, it might have been better had I left him out. So with coming through Tuesdays Co-op Cup tie at Alloa in which we were pretty focused for the whole game and moved the ball around well, there are few complaints so far, especially as we kept a third clean sheet. I made a few changes for the game at Recreation Park to protect the players who have had knee problems like Danny Swanson. Meanwhile, Andy Webster has played so few games over the past three years that one game a week is enough for him just now, so they come back into the reckoning this afternoon. With so many managerial changes in the SPL over the summer, every second or third game we'll be playing a team under new management and Falkirk, whom we welcome this afternoon, are one of them.

Obviously with what Yogi Hughes did for the club over the years, Eddie Mav has a hard act to follow, but, of course, he was part of that, helping particularly on the youth side of things. They have a lot of good young players coming through and that is one of the reasons why he was given the job. In addition. I know his assistant Steven Pressley very well having worked with him at Hearts and stilt speak to him on a fairly regular basis, whilst Alex Smith is an absolute gentleman and a fount of knowledge of the Scottish game. So it looks like a good managerial trio who'll be Learning as they go along. They have a lot of new players in and a lot of changes generally within the club and whilst they haven't got off to a great start, losing both matches, those results don't tell the full story. I have seen their games, and against Hibs last Saturday, they played realty well in the first half when they were the better side. Indeed had they not lost a goal just before half-time, the outcome may well have been different. Therefore, I am very wary of this Falkirk team. They have youth and pace and enthusiasm plus a sprinkling of experience, so it will be a hard game. But there again, in this division there are no easy games, so we'll have to maintain the same Levels of concentration as we have been in our opening three games if we are to take all three points.