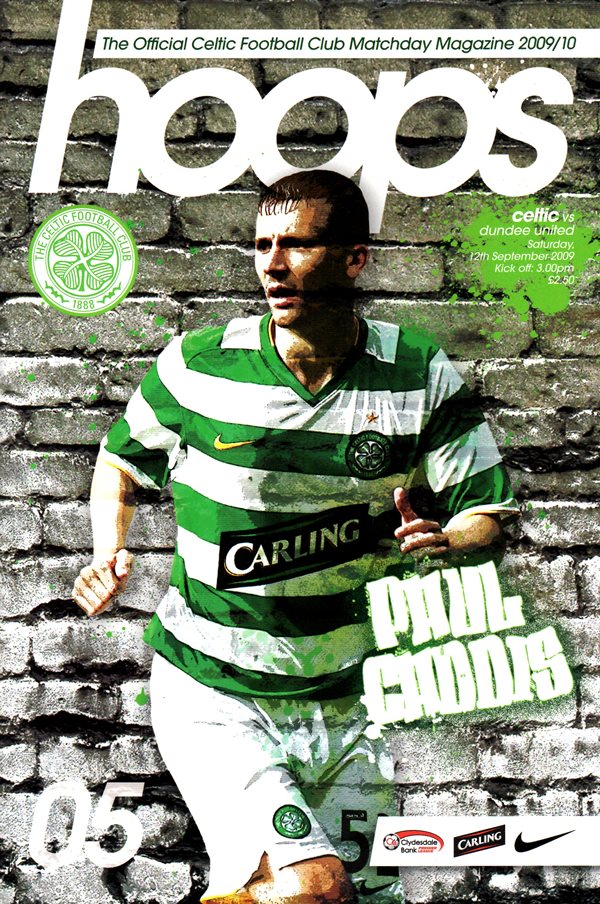 United’s starting eleven was unchanged from the side that defeated Falkirk a fortnight earlier, with David Goodwillie partnering Danny Cadamarteri up front. For Celtic, Samaras dropped onto the bench leaving Scott McDonald as a lone striker and Mark Crosas came in to form a three man central midfield with Nguemo and Brown. With Aiden McGeady suspended, Tony Mowbray handed a debut to Northern Ireland international Niall McGinn, who impressed on the right.

United side started brightly and went ahead after only six minutes. Gomis broke free from Caldwell down the left and his dangerous low cross was met by David Goodwillie who rifled a close range shot into the roof of the net, leaving Boruc with no chance. A Caldwell header from Maloney’s corner was well off target, as the home side struggled to get a grip on the game, but out of the blue, they were handed a controversial equaliser on 18 minutes. Brown’s cross from the right struck Dods on the arm at point black range. It was clearly not an intentional handball – yet the linesman flagged for a foul. The harsh decision was followed by some poor defending as Fox’s left foot set piece was headed into the net from four yards by an unchallenged Scott McDonald. The controversy continued two minutes later when Goodwillie was denied a free kick when driving through on goal and as Celtic countered Swanson tripped Brown. It seemed accidental but with McDonald getting needlessly involved both the Australian and Swanson picked up yellow cards. The hosts upped their game once back on level terms, but Weaver was still only intermittently called into action, tipping a dangerous low McGinn cut-back behind. At the other end Buaben was off target with a first time forty yards strike with Boruc off his line, and then Cadamarteri could only shoot straight at the Polish goalkeeper from a tight angle. With half time approaching a brilliant last minute block from Swanson was required to stop McDonald grabbing a second. United then almost went back in front after a mistake by Fox allowed Robertson a shot at goal, but Boruc parried and the ball was scrambled clear. The final action of the half saw Gomis pick up the third yellow card of the game for a foul and Maloney.

United regrouped at half time and were back on the front foot as the second period started. Goodwillie delayed just a split second too long when released into the penalty box, and Fox was able to put the ball behind for a corner. Scott Robertson was repeatedly on the receiving end of some dubious refereeing decisions and he could consider himself unlucky to go into the book for persistent fouling. Then a superb counter attack saw Swanson driving into the box away from Crosas – the winger slipped the ball past Boruc, but also just wide of the far post. With the home side struggling, Mowbray reshuffled his team bringing Samaras on for Nguemo to play on the left, with Maloney moving into a more central position. The change almost had an immediate impact when Brown – allowed too much time on the right – picked out Samaras with a cross and the Greek internationalist headed past Weaver into the net. The celebrations were cut short by an offside flag. But Celtic looked rejuvenated and another McGinn cross-come-shot went close. Conway replaced the injured Swanson, before Dickson was then added to the growing list of names in the referees book for a trip on McGinn as the game entered the final half hour. From the resulting free kick by Fox, Weaver was called on to make a fine save high to his left. David Robertson replaced Gomis and United seemed to have weathered the storm and began to look threatening again on the counter attack. Celtic brought on Caddis and Mizuno but although both teams kept looking for a winner, some good defending meant the keepers remained underemployed. Fox once again saved Celtic with last ditch tackle this time blocking a shot from Cadamarteri who had looked set to score. With three minutes left Scott Robertson picked up a second yellow card after fouling Maloney, and Celtic had a free kick in a dangerous position. As the tension mounted Kenneth replaced Goodwillie to take up a position at right back with Dillon moving into midfield. When the free-kick was eventually taken it deflected off a Celtic player sending Weaver the wrong way and for a split second it looked like ten man United were going to be robbed. But the ball span wide for a goal kick and United comfortably saw out the four minutes of injury time to secure a well deserved point. United’s search for a first win at Celtic Park since 1992 continued, but this was the club's fourth draw in six visits since Craig Levein’s appointment: an excellent record and this latest point was thoroughly deserved. Composed in possession and disciplined in defence, goalkeeper Weaver enjoyed a reasonably quiet afternoon despite periods of Celtic pressure.