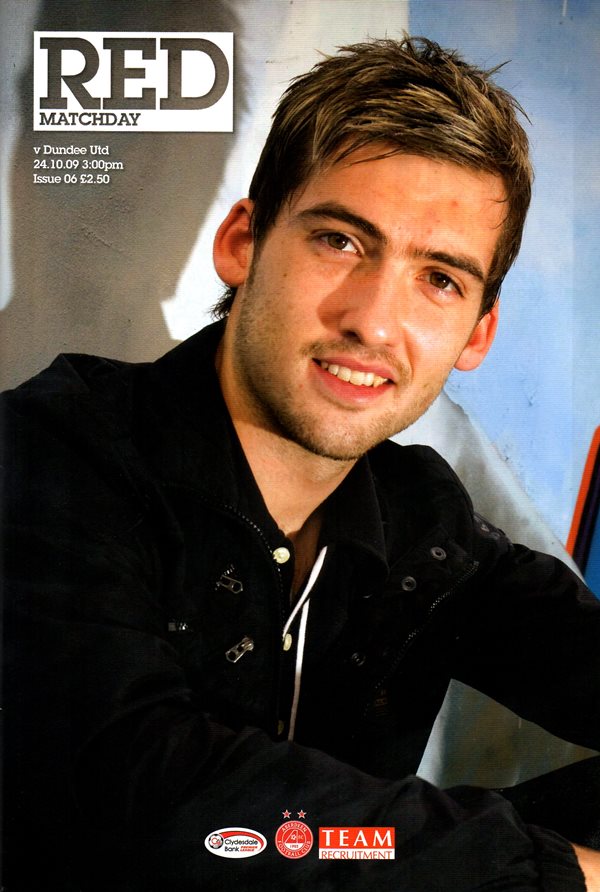 A crisp and blustery morning in the North East was turned into a nightmare for players, coaches and supporters by a deluge of rain which started around half an hour before kick off and lasted throughout the ninety minutes. Dundonian Maurice Ross made his debut for the Dons, after signing a short term deal this week. Mark McGhee also welcomed back central defender Jerel Ifil after a hamstring injury. Dropping out from last weekend’s home draw against Hearts were former United man Stuart Duff, along with Gary McDonald. Aberdeen still fielded three ex-Tannadice men, with Charlie Mulgrew at left back, Lee Miller up front and captain Mark Kerr playing his 50th game for the club. United were missing ‘flu victim Andy Webster, though Darren Dods overcame a fitness concern over his thigh to start the game, with Garry Kenneth moving inside to centre half. Mihael Kovacevic came in at right back, with Sean Dillon moving across to left back, where he played very effectively in United’s win at Pittodrie in the first meeting of the sides last season. Prince Buaben was also back, after serving suspension, and came into the midfield in place of David Robertson, while Danny Cadamarteri, fully recovered from the food poisoning which kept him out last week, was in for Craig Conway. Conway dropped to the bench, where he was joined by Danny Swanson, also back after suspension, and Keith Watson, who took another step back on his recovery from long term injury.

After just fifty seconds, sixteen-year-old midfielder Fraser Fyvie should have opened the scoring. A wind assisted Jamie Langfield clearance flew over the head of Mark Fotheringham in the United half, and as the ball dropped, defensive mistakes followed. That left Fyvie one on one with United’s goalkeeper, but the youngster placed his shot wide of goal. United responded well, Casalinuovo shooting over from twenty-five yards after good work from Kenneth, and they were inches away from the lead in the ninth minute. Dillon’s ball into the feet of Cadamarteri allowed the Englishman to spin away from Ifil, and into the Aberdeen area. From the left angle, Cadamarteri shot across and beyond Langfield, but to the despair of the travelling support, the ball clipped the outside of the post. Garry Kenneth then headed over unchallenged from a Myrie-Williams corner as he sought to generate plenty of power on his effort. Just after the midway point of the first half, Aberdeen wasted an even better opportunity than they’d had in the first minute. Michael Paton’s ball into the middle was controlled beautifully by Miller, his first touch taking him away from Dillon’s challenge and leaving him in the centre of goal five yards out, but somehow he too sliced his effort wide of goal. The Dons were made to pay for their profligacy six minutes later. A fine run and pass by Morgaro Gomis found Danny Cadamarteri, whose shot from long range was turned round the post by Langfield. Fotheringham swung the resultant corner into the six yard box, where Damián Casalinuovo movement got him in front of Ifil and able to guide the ball into the bottom corner, despite Richard Foster’s attempt to clear off the line. The goal was no more than United deserved but seemed to unsettle Aberdeen even more at the back and the lead was doubled five minutes later. United earned a corner when Mulgrew slashed wildly to clear a Dillon cross. Fotheringham again took the corner, which was half cleared and United earned a throw in on the right. Kenneth took it short, and his cross on the return was only half cleared by Mark Kerr, the ball coming back to the edge of the area where Morgaro Gomis showed great technique to control a right foot finish low into the bottom left corner to spark wild celebrations among the vociferous travelling support. Kerr had a half chance at the other end in the final minute of the first half, seeing his first effort blocked by a defender before guiding a tame effort on the rebound which Weaver smothered low to his left.

United were the brighter side in the opening stages of the second half, and almost added a third goal inside the first minute after the restart. Mihael Kovacevic won a challenge well around the half way line, and he fed Myrie-Williams, who set off on a surging run – waltzing past Mulgrew as if he wasn’t there – and firing in a shot from the edge of the area which fizzed a foot or so wide of target. Danny Cadamarteri also threatened in the early stages of the second half, with Considine deflecting his shot over the bar. A third goal would have killed the game off as a contest completely, and with Aberdeen looking to make the most of the swirling winds and unpredictable gusts, the security of a third would have let any nerves amongst the United fans dissipate completely. The third almost came again on the hour mark, after Damian Casalinuovo had earned a corner from Ifil. Myrie-Williams swung in the corner, and Kenneth met it powerfully with his head. The United contingent rose as one to celebrate, only to see the ball glance agonisingly wide of goal. At the other end, Nicky Weaver was having to stay alert and watchful of anything coming his way, the sweeping and torrential rain and gusting swirling winds making life very difficult for goalkeepers. He took a sore one midway through the second half, as Mulgrew swept an up and under into the United area which would have come down and dropped into the top corner had Weaver not watched it perfectly and tipped it over the bar as he backtracked, colliding with his back post as he did so. There was a little bit of niggle creeping in as Aberdeen’s frustration at being unable to break down a well organised defence grew. Lee Miller was central to most of it, an ongoing spat with Jennison Myrie-Williams on the touchline right in front of the technical areas at a throw in leading to a conflict of opinion by the officials. Steve Conroy first awarded a free kick for United, before fourth official Craig Mackay seemed to inform him of what he’d seen from a different view, and not only did the free kick go the other way, but United’s winger was booked. Mark Kerr saw yellow for a scything challenge from behind on Prince Buaben, while there was a late incident between Miller and Dods which led to both players getting booked after Miller had shoved the United captain in the chest. In between times, Aberdeen substitute Sone Aluko shot wide of goal from the angle, with Miller unable to make up enough ground to make contact across the face of goal, while Weaver was alert to close down another home sub, Darren Mackie, after he had broken into the area to collect a pass from the third sub, Chris Magure. On the whole, though, United remained resolute and organised at the back, and with a hard working midfield winning more battles than they lost, and the front two making the Aberdeen defence look uncertain and anxious throughout, this was a well deserved three points for the Tangerines.