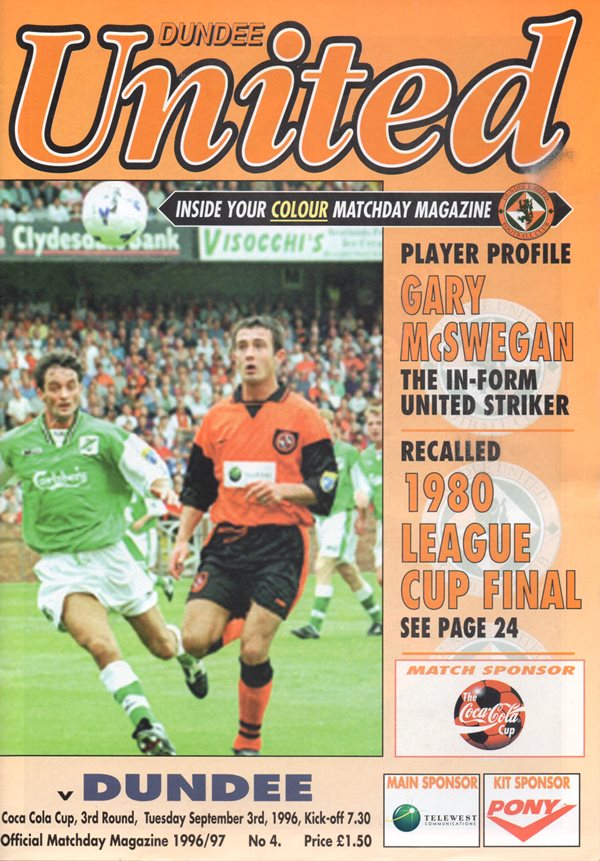 This great cup tie ended with United losing out on penalties, but it was a controversial spot kick which brought Dundee back into the game after United had gone ahead. Dave Bowman for Ray McKinnon was the only change from the side which had lost narrowly at Ibrox and the returning United skipper almost made it a great start for United when he took a return pass to fire in a first time shot which Billy Thomson was to turn round the post. This was to set the pattern for the evening as the ex-United keeper was to continually deny his former club. However, it was a mistake by 'Tommo' which gave United a 20th minute lead. Andy McLaren's flick came back to him off the referee and he jockeyed himself into a shooting position. His ground shot carried no great power, Billy let the ball slip from his grasp and Owen Coyle snapped up the chance from the rebound.

Robbie Winters had to leave the field with blood streaming from above his right eye in the 33rd minute and whilst he was off getting treatment, Dundee came close to getting an equaliser, George Shaw firing in a shot from which Maxwell emulated some of Billy Thomson's heroics by tipping over. Six minutes later and just as Robbie Winters entered the fray, Dundee were celebrating a goal. A corner came over, the referee mysteriously awarded a penalty from which Jim Hamilton scored, although Ally Maxwell almost succeeded in keeping out his shot before the ball spun in to the corner of the net. The frantic pace continued unabated and Billy Thomson made a great save from Gary McSwegan and Owen Coyle, before pulling off a great block to stop a Gary McSwegan effort from 12 yards.

Not to be outdone Ally Maxwell produced a fine one-handed save to tip over a Hamilton header. The catalogue of fine saves by both keepers mounted up before the end of ninety minutes, and so the tie went into extra-time. This only served to add to the frenzy of the game. Both sides hit the woodwork; Hamilton heading against the bar and Gary McSwegan crashiing a shot off the post a minute later. The incident was never ending. Owen Coyle ushered a Robbie Raeside header off the line and Billy Thomson was back in action with a great save from a Gary McSwegan free-kick. But it was Dundee who were to go in front, albeit with a huge slice of luck. Ally Maxwell looked to have a shot from Paul Tosh well covered, but it struck Jim Hamilton and left the United keeper stranded.

However, with ten minutes of extra-time remaining Gary McSwegan ran on to a Robbie Winters lofted pass and finally beat Billy Thomson, blasting the ball past him from 12 yards. So, it was into penalties and whilst Ray McKinnon and Neil Duffy converted their kicks, ironically, the two goalscorers, Gary McSwegan and Owen Coyle, both saw their efforts saved and with Tosh, Charnley, McKeown and Ferguson all counting from the spot, United went out 4-2 on penalties.