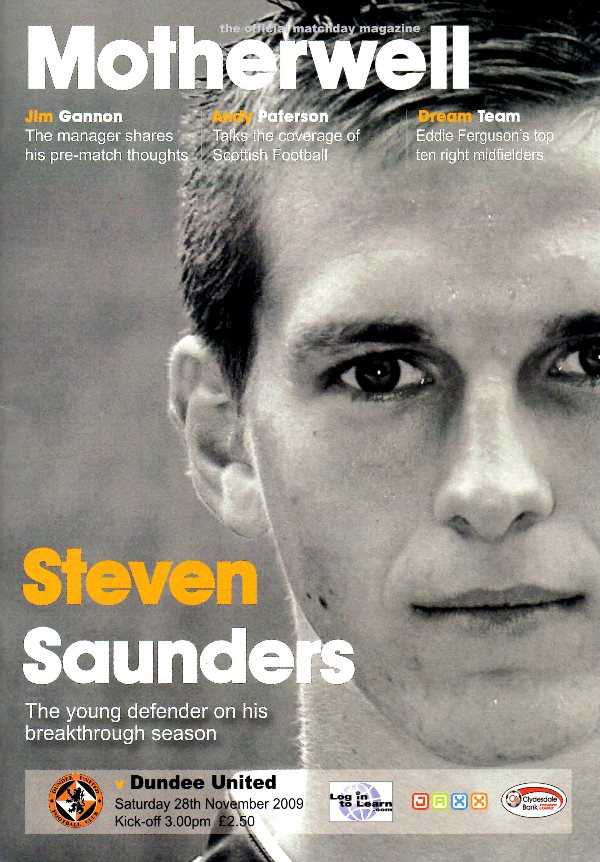 With the two sides unbeaten in the SPL since September, both managers were happy to stick with the teams that secured a point for Well against Aberdeen, and three points for United against Celtic. While the visitors continued in 4-4-2 formation, the hosts lined up with a midfield three of Hateley, Forbes and Coke, and Jutkiewicz, Sutton and Murphy in attack

The game started brightly, both sides intent on getting the ball down and taking the game to the opposition. Nevertheless, with defences well marshalled early chances were confined to long range efforts from Dixon, Myrie-Williams and Buaben. But a well worked set-piece from United saw them take the lead on 14 minutes. Webster’s deft touch from a throw in put Dixon in behind the Motherwell defence; the full back’s cross was only cleared as far as Andy Webster again, and from 15 yards the centre half showed great composure to control the ball on his chest before rifling home a right foot drive - his third goal for the club. Motherwell’s response was immediate. First of all John Sutton was denied by a last ditch tackle by Paul Dixon and a follow up effort from Jutkiewicz drew a smart block by Weaver before another attempt deflected for a corner. United didn’t heed the wake-up call – and the equaliser looked like it had been copied from United’s win over Celtic last weekend. Forbes took the corner from the left and John Sutton headed into the corner of the net from about 15 yards. Well seemed to be lifted by their equaliser and Sutton almost took advantage of indecision in the visiting defence but his 25 yard drive evaded the far post. United remained dangerous and when Buaben fed Casalinuovo, a quick turn and shot from the edge of the box pulled out a good save from John Ruddy. Motherwell went ahead on the half hour mark. There seemed to be little danger as Lucas Jutkiewicz collected the ball at the edge of the penalty area on the left flank but his audacious snap shot took keeper Weaver by surprise and the ball nestled in the far corner of the net. With their noses in front, Motherwell started to dictate the game more, and while United fought back as the half time whistle approached, again a shot from distance by Myrie-Williams was as close as they came to scoring. The closing stages of the first half also saw focus begin to switch to the officials with Myrie-Williams picking up a soft booking for a foul on Forbes, then moments later when the winger went down in the box the referee ignored both calls for a penalty, and calls for a second caution. There were to be more controversial decisions in the second period.

United started the second half positively, but continued to be frustrated by a well organised defence. Casalinuovo’s shot from the left edge of the box was comfortably gathered by Ruddy, then Craig Conway went close, robbing Moutaouakil and then putting a fierce drive from 20 yards inches past the post. Well tried to get back on top bringing Lasley and O’Brien on for Forbes and Murphy. United responded with a double substitution of their own, Daly and Goodwillie replacing Casalinuovo and Cadamarteri, as the visitors looked to add a cutting edge. But their task was to become even more difficult with 23 minutes remaining as Buaben received the second of two very soft bookings. Having earlier been booked for a tackle on Murphy, a trip on O’Brien brought a second yellow from the referee – yet neither tackle could in any way be seen as dangerous or malicious. Things might have got even worse for United moments later when Myrie-Williams escaped unpunished after a late tackle, and rather than risk another sending off, manager Levein immediately replaced him with Swanson. With dark irony, Swanson himself would last only 20 minutes before himself becoming victim of another very harsh red card. In the meantime ten man United had to show great discipline to keep themselves in the game, Motherwell moving the ball around to make as much of their one man advantage as possible. Then as the game entered the last ten minutes, the home side started making mistakes and Untied went about taking advantage. First Danny Swanson won the ball in midfield, giving United a three on two. The midfielder fed Daly through on goal but his effort was too close to keeper Ruddy who saved, and Goodwillie chipped the rebound over. But United were not to be denied. With seven minutes remaining another break was lead by Gomis. He fed Dixon on left, and the full back drilled a low cross into the path of Jon Daly who finished clinically from twelve yards. Then came the straight red card for the unfortunate Danny Swanson. His tackle on Lasley was poorly timed but once again was neither malicious or dangerous. Despite Lasley being back on his feet completely unscathed, out came the red card. Inevitably Motherwell cranked up the pressure, but nine-man United defended resolutely. In the second minute of stoppage time Motherwell finally created a last chance – Lasley’s 20 yard shot caught Weaver unsighted, but he stuck out a hand at the last possible moment and the ball deflected agonisingly wide. Another gutsy but well deserved point was secured.