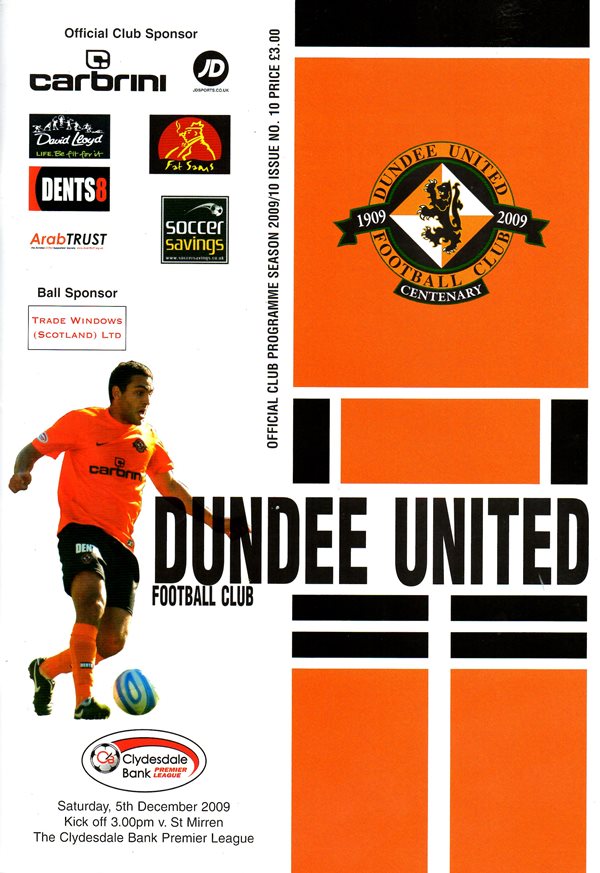 There were two changes to the United line-up for the visit of St Mirren. Sean Dillon came in for the suspended Prince Buaben and David Goodwillie started in attack alongside Casalinuovo with Danny Cadamarteri making way. Former United men Paul Gallacher, Lee Mair and Chris Innes all started for the visitors.

The visitors started the brighter of the two sides and with five minutes gone Weaver was called into action when he saved a long range Thomson effort low to his right. With nine minutes on the clock United had their first attempt at goal but Goodwillie’s effort was well off target. A minute later a fine pass from Ross allowed Thomson to fire in a snap shot from waist height but the ball just cleared the crossbar. St Mirren were then caught out twice with marginal offside decisions. Both involved Mehmet and on the first occasion he made a mess of his shot and the second time round he had the ball in the net but to United’s relief the decision was correct. With twenty minutes gone McGinn became the first man to be booked for a terrible challenge on Gomis. Both teams then had appeals for a penalty kick knocked back. Firstly Brady burst into the United box and with Kovacevic present he went down far to easily and the referee awarded a goal kick. Then Myrie-Williams stumbled in the Saints box but the referee again decided there was no foul. On the half hour mark United were ahead. Sean Dillon, who was playing an unfamiliar midfield role, perfectly picked out Damián Casalinuovo who beat Innes and sent a low shot past Gallacher into the bottom corner of the net. Six minutes later United should have doubled their lead when after a Dillon cross and Casalinuovo header fell into the path of Goodwillie the youngster took a wild swipe at the ball which went well wide. This was short lived though as with a minute of the half remaining United did double their lead when Craig Conway superbly caught out Gallacher at his near post with a free kick from 25 yards out.

Two minutes after the restart United were almost out of sight when a great move involving Dixon and Conway ended with Casalinuovo firing into the side netting. Brady then broke from the St Mirren box and with Goodwillie chasing hard the United man was booked for pulling back the former Dundee man. United then received a further yellow card when Myrie-Williams was booked for using his elbow. Things got worse for United on 55 minutes when Morgaro Gomis was given a straight red card for appearing to slap McGinn and from the free kick the visitors were back in the game when Innes headed towards goal and the ball ended up in the net after deflecting off Darren Dods. Scott Robertson then made a welcome return replacing Goodwillie and then shortly after O’Donnell came on for the visitors and United’s Jon Daly swapped places with Casalinuovo. To complete a flurry of substitutions former United man Stephen Robb came on for Hugh Murray with 15 minutes left. A minute later there was a further yellow card when Barron was booked for a reckless challenge on Myrie-Williams. With twelve minutes left United restored their two goal advantage. Conway played a perfectly weighted pass into the path of Jennison Myrie-Williams and the Englishman flicked the ball over Gallacher to score his first goal for his new club. Chris Innes was then cautioned for a blatant foul on Conway and shortly after Conway had a left foot shot that only just missed the target. Saints them made their final change of the afternoon when Thomson made way for Conor Ramsay. The Buddies then set up a nervy finish for the home support when a Stephen O’Donnell shot from twelve yards was deflected past the helpless Weaver. In the dying minutes Darren Dods went off with a head knock and was replaced by Garry Kenneth and then goalscorer O’Donnell was booked for a shocking two footed lunge at Dixon that could easily have merited a red card. United held on though for three vital points.

It is a pleasure to welcome Gus MacPherson and his St Mirren side to Tannadice this afternoon. I would like to congratulate them on reaching the semi-final of the Co-op Cup and we know from the goalless first meeting at Paisley earlier in the season, that we are in testing time this afternoon. Of course, we go into this game on the back of two very good results. Indeed, one of the most pleasing things about the win over Celtic was that we can play better, but still won. By scoring two late goals to win the game, we did to Celtic what they so often do to others for which they players deserve tremendous praise. For me, one of the most heart-warming things to see was the return of Jon Daly. After coming off the bench against Dundee in last month's friendly, he did the same again against Celtic, as he did indeed Last week at Motherwell. It has certainly been a dream return for Jon, who after enduring such a terrible time with injuries, is in as good as shape as I have seen him. I was also pleased that Darren Dods was able to atone for his mistake in giving away the penalty from which Barry Robson by heading the winner. All in all, I was simply thrilled for the players' efforts delivered a long awaited win over Celtic for our fans. That kind of never-say-die attitude is required by any side with aspirations of winning anything and augurs well for the future. Certainly, it was required again in full measure at Motherwell last Saturday, especially as we finished the match with nine men. Having been reduced to ten men after Prince was sent, we still managed to square the game and then hold on for the last few minutes after Danny’s dismissal. Again it was an example of the terrific attitude within the squad, evidence by the fact that we gave now scored six goals in the latter stages of games, which speaks volumes for the tenacity within the side. My thoughts on the two sending offs have been well documented, but it does afford the opportunities for others.

In fact, all season the depth of our squad has been put to the test and I have been forced to chop and change the side all season. Hopefully soon though, things will ease with Mark Fotheringham, Scott Robertson, Fran Sandaza all improving with Lee Wilkie hopefully ready to step up his training next week. In addition, we'll have Keith Watson. Greg Cameron and Kevin Smith alt back from their loan spells. They'll all be needed with an import period of league games coming up and the Scottish Cup just around the comer. And hopefully, we'll be able to continue our recent run and reward our supporters for their loyalty over the remaining months of the season. Though first and foremost, securing a win this afternoon is the only thing on everybody's mind.