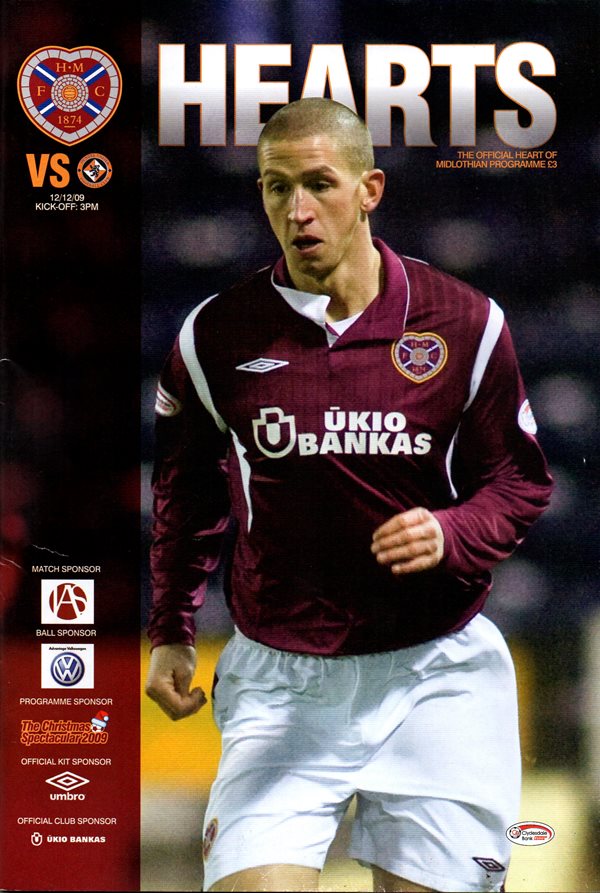 Dundee United were hoping to keep apace at the top of the SPL table at Tynecastle against a Hearts side struggling to repeat the form that saw them finish ‘best of the rest’ the previous season. The travelling Arabs were hoping to erase the vivid memories of the comprehensive 3-0 defeat they had suffered in the penultimate game of last season, in what was their last visit to the Gorgie area of Edinburgh. United went into the match with just one defeat in the last eight. Conversely, the Jambos had only recorded one win in their last eight league matches and were already perilously close to eclipsing the number of defeats they had chalked up during the whole of the 2008/09 campaign. Injury troubles and suspensions had plagued Craig Levein’s first team selections throughout the season and it would be no different on this occasion with the midfield pairing of Morgaro Gomis and Prince Buaben both missing. Sean Dillon would again deputise in the heart of midfield and he was accompanied by a returning Scott Robertson, making his first league start in two months. However a testament to the depth of Craig Levein’s squad was that heading into the 14th game of the season only on-loan keeper Nicky Weaver had started every game. There were a few raised eyebrows with the Hearts starting eleven, with 17-year-old youth striker Scott Robinson handed his full debut partnering Jamie Mole up front, in what was also his first start of the season. Ismael Bouzid, Csaba Laszlo’s only ever-present so far in the campaign, was missing through suspension along with Ian Black and Suso Santana, although there was a boost for the home side as captain Michael Stewart could take part after his ordering off against Hamilton was rescinded.

After quarter of an hour of frantic end to end football, Craig Conway had the first opportunity on goal, firing Sean Dillon’s lay-off wide of the mark. The home side responded straight away at the other end of the park, but Jonsson’s header was off target. Scott Robertson almost found the net on two occasions on his return to first team action, the first of which fell on the half hour mark. Jon Daly and Casalinuovo combined to flick the ball into the midfielders path, but he blasted his effort past Kello’s left-hand post. Moments later his 20-yard drive was parried away by Kello, and as Daly attempted to pounce on the rebound, the keeper again scurried the ball away picking up a nasty bruise over his right eye which required treatment. Jon Daly then had two chances to break the deadlock before the interval, firing over the bar on 40 minutes, before he headed Conway’s injury time corner onto the post.

Neither side opted to make any changes at the interval, but the early introduction of Danny Cadamarteri on 48 minutes had an instant effect upfront for the visitors as they looked revitalised in attack. And the 30 year-old earned a penalty after 60 minutes when his run down the left flank was brought to an abrupt end inside the box by Eggert Jonsson, who always looked in danger of conceding a foul as he struggled to keep pace. Cadamarteri took the spot kick, but Marian Kello saved well diving to his left, while Robertson could only find the side netting with the rebound as he as he tried to steer the ball home from a difficult angle. A route one clearance from former Man City keeper Nicky Weaver, who barely featured throughout the 90 minutes, resulted in another chance for United, as Cadamarteri teed up substitute Danny Swanson who neat left-foot drive had Marian Kello at full stretch to deny United the lead. Full time: 0-0.