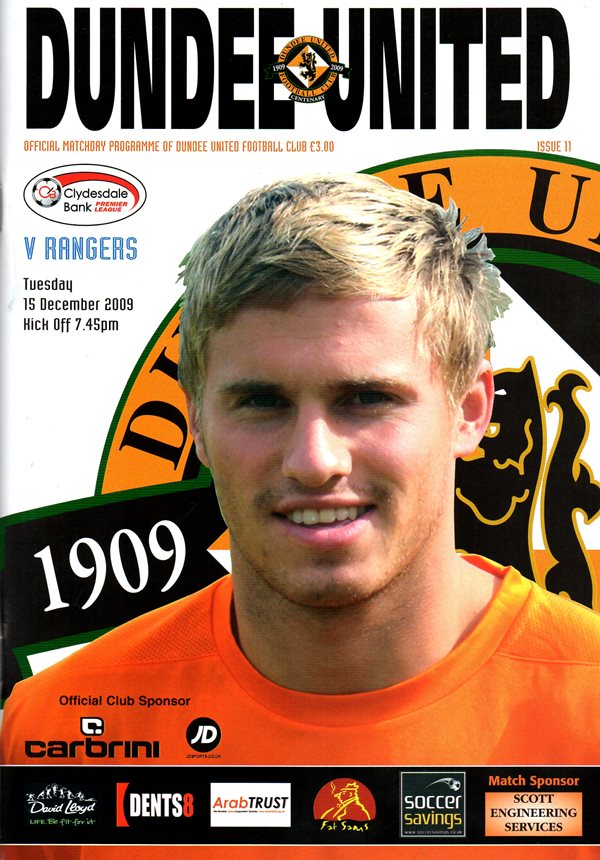 United failed to test Rangers resolve and the Ibrox men ran out comfortable winners on a disappointing night for over 8000 Arabs. The formbook suggested that the home side could make life difficult for the reigning champions, but this simply and inexplicably failed to materiatise, with United strangely subdued and Rangers dominant almost throughout. Manager Craig Levein made four changes from the weekend, with Scott Robertson. Myrie-Witliams and Casalinuovo all dropping onto the bench while Andy Webster was unavailable for selection due to the terms of his loan deal. In came Darren Dods and Danny Cadamarteri as well as both Prince Buaben and Morgaro Gomis who shook off minor injury concerns to feature.

Despite earlier predictions, the two teams took to the field in front of a large crowd of over 10,000, swelled mostly by home supporters who outnumbered the Rangers fans by a factor of four. A robust start to the match saw a number of heavy challenges before Danny Cadamarteri was the unfortunate player to pick up a harsh booking for a foul on Lee McCutloch who had already committed far worse. Nicky Weaver had to look lively to stop a good effort by Beasley and then recover in time to stop Boyd pouncing on the rebound. Lee McCulloch also tried his tuck long range but his shot sailed wide. It took United some 20 minutes to force a series of concerted attacks and from one there were muted appeals for a penalty when Jan Daly went down under a challenge by two defenders in the box. It then looked as if Garry Kenneth had made the breakthrough when he powered a Paul Dixon comer over the line. However, the referee blew for an infringement against Kovacevic. Another good delivery, this time by Craig Conway, saw Jon Daly lose his marker and rise to shape a header. With Arabs on their feet to celebrate a certain goal, the big striker directed his header straight at keeper Alexander. United were made to pay for these missed opportunities when Rangers took the lead in 27 minutes. Beasley accepted the ball from a throw on the right and curled in an audacious left foot shot over Weaver and into the far, top corner of the net. From then until the half time whistle, Rangers were very much in the ascendancy and United had narrow escapes from Beasley and Boyd who both went close to adding further goals.

It was no surprise therefore that the manager made a change at the interval, bringing midfielder Scott Robertson on for Kovacevic and moving Sean Dillon from midfield to right-back. Robertson made a promising start, playing a perfect pass left to Conway, who picked out Daly inside the box but the Irishman couldn't get a decent shot away. Daly then went a lot closer still when he got a glancing header from a Dixon comer. However, despite United's more promising start to the half, it was the visitors who doubled their tally in 58 minutes. Novo got the break of the ball as he took on Dillon on the left wing and crossed for Kenny Miller who had a simple free header from just six yards out. Weaver then saved again from a Boyd header as United were put under constant pressure before Miller sealed the game with a third goal after 74 minutes. Beasley played the ball inside from the right before the Rangers striker turned past Robertson with the aid of a deflection before slotting past Weaver from eight yards. With the game all but lost the Terrors kept plugging away, but it was simply not their day as the game ended in disappointing defeat. 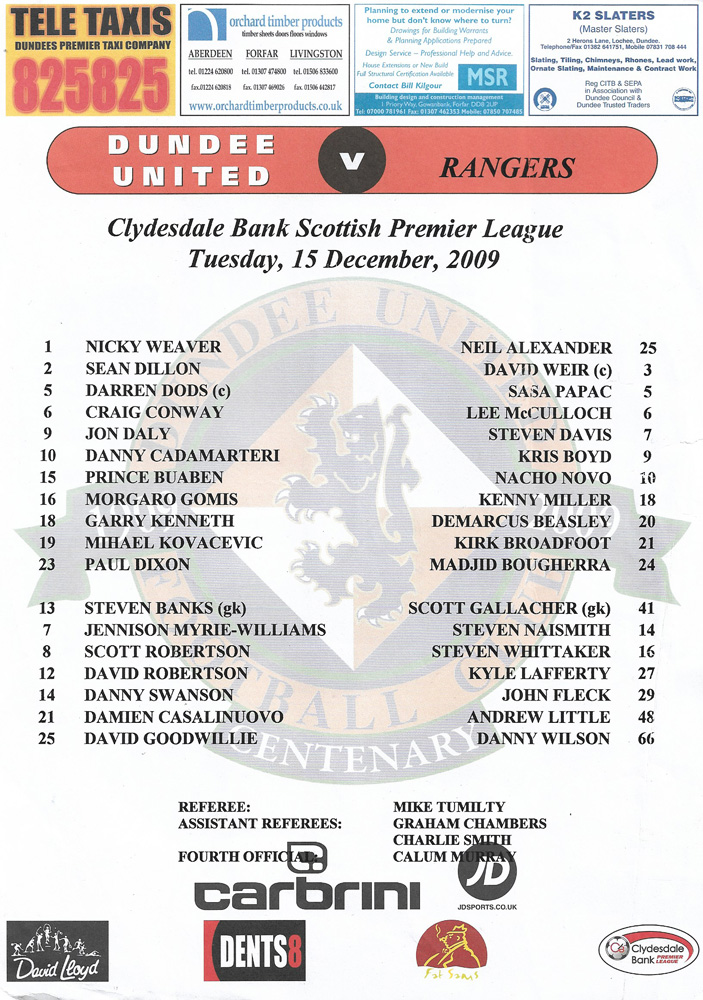 Tonight we face Rangers for the second time inside six weeks, but hopefully we'll be spared the monsoon that led to the first meeting being abandoned. It is a pleasure to again welcome Walter Smith and his assistants Alistair McCoist and Kenny McDowell who have all shown outstanding loyalty by agreeing to work on without contracts after their deals run out next month. And that is typical of just how honourable a man Walter is. Of course, the reason they are back here so soon was last month's meeting failing to go the distance, but even the rain that day failed to put a dampener on a fantastic 45 minutes. Hopefully, this will be as good a game, but, of course, with a different outcome, given that Rangers were a goal up before proceedings came to a premature halt. Although not an issue at Tynecastle on Saturday, red cards have been very much hitting the headlines and I feel that we have been harshly treated for the challenges that our players have been sent off for, compared to others. For example there were two challenges in our last home game against St Mirren by McGinn and O'Donnell and both for me merited a red card, more so than the one Danny Swanson received at Motherwell. And in that game at Fir Park, Prince Buaben was sent off for persistent fouling whereas St Mirren's Chris Innes committed far worse tackles after he got booked and yet stayed on the pitch. I am not calling for these players to get sent off, just for consistency so that our players don't suffer the way they have. It used to be a yellow card was a significant event in a game, and a red card a rarity, but less tolerance for what in many cases are ordinary fouls means that players are left sitting in the stands and not for something that I could blame them. I long for the days when a referee would have a quiet word with a player, saying 'Look that's your second challenge, so watch what you are doing.' Then there was a kind of rapport, but now I worry we are heading to a situation where the two are sitting on different sides of the fence and that is something we don't want to happen. Part of the problem is that with so many young refs coming through, they haven't had the life experiences to cope with the pressure. For me refereeing is all about experience - the longer you have been doing it the better you become. I am not having a go at referees, but it is the culture that needs to be addressed.

Staying on a disciplinary theme, our suspensions are temporarily over this evening with both Morgaro Gomis and Prince Buaben back, though Morgaro misses Saturday s trip to Hamilton Accies. Because of their absence, Scott Robertson started at Tynecastte against Hearts and although he did very well to get through 90 minutes, I'm conscious that I didn't expect him to start making a contribution again until the end of this month. Therefore I feel it would be asking too much of him to start twice in just four days and, with Prince and Morgaro coming back, I can leave him on the bench. I have an open mind about my team selection for tonight, because Sean Dillon has been our most consistent performer over the past two games. Utilising him in midfield was a bit of a gamble, but he is such an assured passer in training that I knew it was not as big a risk as people might have thought. And he has looked very comfortable and, while I now have two good players for his position back in the squad, I am not forgetting how well he has done. He's certainly in my thoughts and, from now on, I will be thinking in terms of using him in that area as well as in both full-back positions. However, one player who is unavailable tonight is Andy Webster, who under the terms of his loan agreement can't be involved in games against Rangers. But with Darren Dods set to come in after missing out on Saturday, we are well covered. Another very pleasing thing for me has been Jon Daly's return. After all the injuries it was great being able to give him a start at Tynecastle after making a big impact from the bench in the previous three games. Unfortunately, we came away from Edinburgh having left two points behind after the goalless draw. We weren't at our best, but coped comfortably in a defensive sense, but the problem was our creativity wasn't what it has been. And that was frustrating because we really wanted the three points so we'd have been on the coattails of Rangers and going into this game and being in a position to possibly pass them. All we can do now is get a result that gets us back hanging in there again. We know that won't be easy, but so long as we show the tenacity which was the hallmark of the win over St Mirren in our last home game, we'll be in with a very good shout.