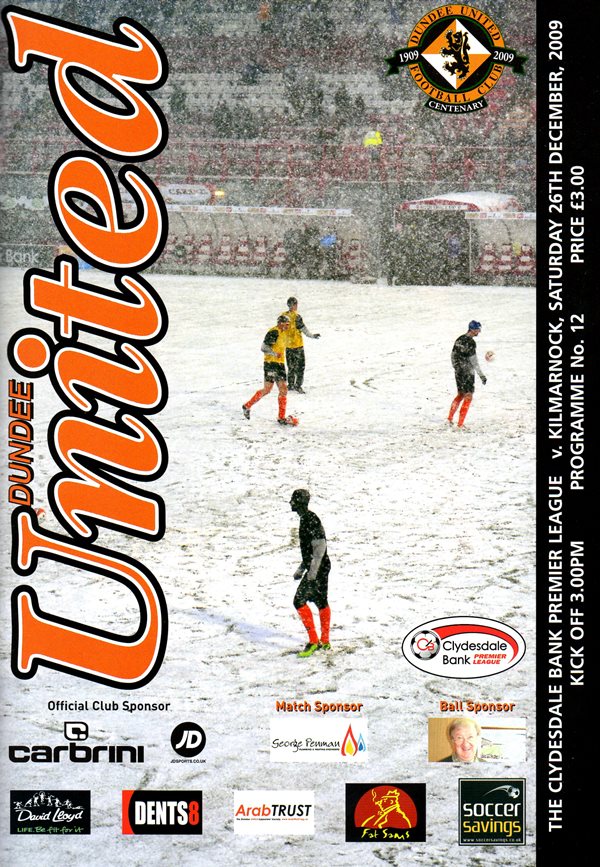 United started life without Craig Levein with a 0-0 draw at home to Kilmarnock at Tannadice on Saturday.

Despite creating enough opportunities to win two games, the home side failed to find the winning goal their efforts deserved.

Peter Houston, who has taken over as interim manager, will have been disappointed not to see his team take all three points to keep up the pressure on third placed Hibernian in the SPL.

On another day, the outcome could have been so different. The Terrors almost took an early lead through David Goodwillie, but the young striker failed to connect to Craig Conway’s cross when all that was needed was a touch.

United piled on the pressure, with Paul Dixon, Conway and Jennison Myrie-Williams causing problems for the Kilmarnock fullbacks, but despite winning a number of freekicks and corners, the home side couldn’t capitalise on their superiority.

Jim Jeffries’ side’s only effort of note in the first half came in the 20th minute, when Andy Webster’s headed clearance fell to Craig Bryson some 30 yards from goal. The Killie midfielder let fly, but thankfully for United, his volley flew just wide of Weaver’s right hand post.

United’s dominance almost paid off when Jon Daly headed a Conway corner goalwards, only to see his effort cleared off the line.

Sean Dillon was also denied when he unleashed a 25-yard curler towards goal, but he saw his shot crash off the crossbar.

The second half resumed in much the same manner as the first, with the one-way traffic heading towards Mark Brown in the Kilmarnock goal.

Peter Houston brought on Danny Cadamarteri, Danny Swanson and Damian Casalinuovo as the Tangerines pressed for the opening goal and the trio all played their part as United threw everything at Killie.

And it was the Argentine striker who came closest to breaking the deadlock in the closing stages.

Swanson picked up the ball in midfield and played the ball to Prince Buaben. He laid the ball into the path of Casalinuovo, but the striker squandered what was perhaps the best chance of the match, hitting a tame effort straight at Brown, allowing the ‘keeper to save comfortably.

In stoppage time, Casalinuovo also saw his acrobatic overhead kick saved, but in spite of the late onslaught, the Tangerines couldn’t find a way through and had to settle for a point.

First of all, I would like to wish Jim Jefferies and his Kilmarnock side and all the supporters the compliments of the season and hope everyone had a very Merry Christmas. There is no doubt that we let ourselves and our supporters down badly in our last match with Rangers. It is not something I'd accuse us of very often, because generally, even if we lose matches, we tend to be, in my eyes anyway, at least competitive. I would hesitate to say that we didn't actually compete, but I think what happened was that a lot of the players have never experienced that level of expectation. Even having played in cup finals or going to Ibrox or Celtic Park, we have always been underdogs. But this was the first time I can remember that people were actually saying they fancied Dundee United to beat Rangers. And I suspect that level of expectation was too much for us to handle. It was the first time that we have been in that position, but the good thing for me is if we get ourselves back in that position again, we know what to expect and I think that's important, because players learn by experience. Rangers started particularly well and we got blown away. They appreciated the significance of the game and again that is a compliment to our players and the way we have been playing. They started at a 100 miles an hour and never took their foot of the gas with the result that we never got a foothold in the game at all. But that's football. It wasn't a case that we weren't trying, but we slipped up here there and before we knew it, it had spread very quickly right through the whole team. And in some ways I am glad they have experienced being so much under pressure, so they understand what is the worst thing that can happen - we lose the game and nothing more. So what we must do is get back in full stride as quickly as possible.

Unfortunately, we were unable to do that against Hamilton last Saturday because of the freak snowstorm that caused the late call off at New Douglas Park. It really is essential that we cast the Rangers defeat to history books and concentrate on getting the three points this afternoon to boost the confidence when we meet them again at Ibrox. Although Rangers have got their noses out in front of everybody, it isn't the end of the world, especially as Rangers and Celtic meet next weekend. Today, of course, we meet a Kilmarnock side that got sucked into the battle at the foot of the table after last Saturday s home defeat to Falkirk. Even although we had a very good result down there in a very open game, and I think it will be the same again, we have to be wary of Jim Jefferies side, but this will be our first chance to atone for the disappointment of that defeat by Rangers. So I am sure that the enthusiasm and energy that should be there for every match will be just that little bit more tangible amongst the lads. One person we will have to keep a watchful eye on is their skipper Kevin Kyle. He played very well against us at Rugby Park, but despite where they are sitting in the league, they have a lot of good players in their team, Just to illustrate how tough opponents they can be, you only have to reflect on our three meetings last season in which we failed to score against them! They won the first two games 2-0 and then held us to a goalless draw in the third meeting at Tannadice. So we are expecting a very tough match, especially as Killie are so desperate for points.