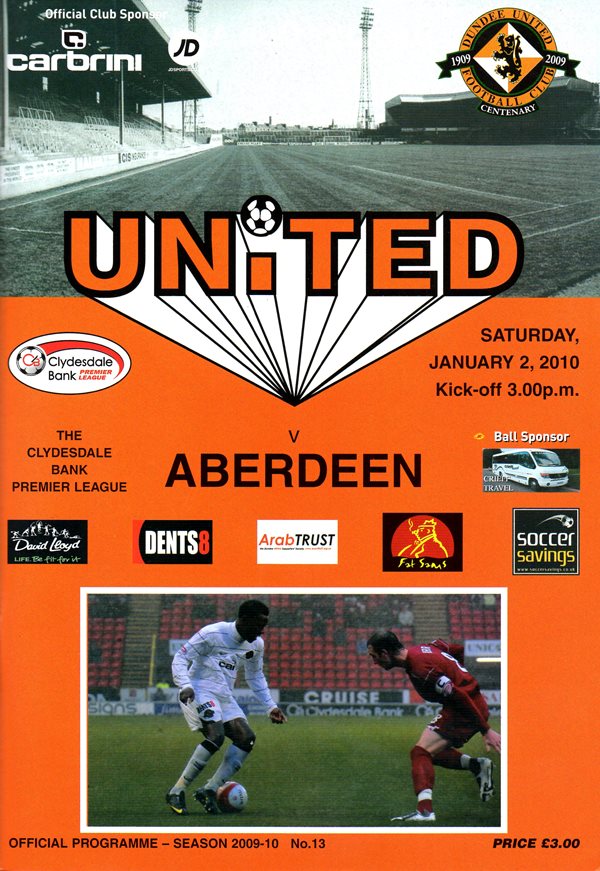 United’s festive woes continued going down to a 1-0 home defeat by Aberdeen. A goal in the first half from Charlie Mulgrew was the difference and despite United creating the bulk of the chances, hitting the woodwork twice in the closing stages and having an extra man for the final 25 minutes, the visitors held on for all three points.

Changes were inevitable following the heavy loss at Ibrox and Webster came in for Dods and Casalinuovo started in place of Myrie-Williams. United’s keeper Nicky Weaver lined up for the final time with his short term contact expiring after the game.

In front of a bumper crowd the game started tamely and it took ten minutes for Aberdeen to create the first chance of the afternoon but Kenneth did well to thwart Fyvie. Five minutes later the Dons went ahead when Kerr intercepted a Webster pass to feed Marshall who laid the ball into the path of Mulgrew who finished low past Nicky Weaver. United almost hit back when Webster latched on to a Conway free kick but the big defender fired into the side netting. With half an hour on the clock United should have been level when Gomis latched on to a Conway free kick but somehow he fired wide. On the stroke of half time the visitors were awarded a free kick at the edge of the United area. Mulgrew stepped up and swung in a direct free kick but to the relief of the home crowd Weaver tipped the ball brilliantly round the post.

Just after the hour mark the second half burst in to life when Grassi and Webster clashed in the visitors’ box. After consultation with the stand side linesman referee, Calum Murray booked the United defender and ordered off Aberdeen’s Italian defender. From then on it was a constant flow towards the Aberdeen goal and twice Daly was unlucky when Langfield saved a header and then his volley went inches wide. Aberdeen did go close with 15 minutes left but Weaver saved well from a shot from Paul Marshall. With seven minutes remaining, United could not have gone closer when a Swanson corner found the head of Andy Webster but his effort came back off the post. In the dying minutes United must have realised it was not to be their day when another Swanson corner landed on the head of Kenneth but this time it came back off Langfield’s crossbar.

Whilst I am sure all United fans were disappointed that Craig Levein has left the club to take the Scotland job, it was one the gaffer couldn't turn down. It will increase his profile no end and he really does deserve this opportunity. Like everyone else in the country, I wish him all the very best. I'm sure he will rise to the challenge like he always does. Craig has done well and moved on to a new job, but life goes on, and people moving on goes with the territory when it comes to football. Now everyone connected with the club must concentrate on the future. Craig always told the players that we didn't want them here forever; because hopefully they'd become good enough to earn them a move to a bigger club. Two years ago, we lost Barry Robson when he was our main man and, last year, Willo Flood went in January when he was playing well. The same has now applied to Craig. And I am pleased for him, because he has received the recognition he is due and I've no doubt he is the right man to Lead Scotland. Losing him is, of course. a blow, and after he went, some of the lads were understandably down. But being the professional bunch they are, once we got out training, everything was fine. From a personal point of view, I'm delighted to have been given the job on a caretaker basis. For the next few games, perhaps up until the Scottish Cup tie with Partick Thistle next week, I'll be in charge of the said. And I'm quite happy and relaxed about the situation, because normally when a caretaker is appointed, it is because the manager has been sacked because the team are struggling near the bottom of the table. But this is an entirely different scenario— we have only lost two games this season and are on a roll so it's all about continuity.

For the moment though all I am concentrating on is getting results from this hectic spell. Remember, whilst we had been going well, we went into last week's game with Kilmarnock, not having done ourselves justice against Rangers in the previous game and atoning for that was the only thing on the players minds. Unfortunately, we didn't get off to winning start against Kilmarnock last Saturday, but it was a tough match, in which I thought we created the better chances in the first half. But Killie with Kevin Kyle up front are always a threat, and they put big boys in the middle of the park to stop us playing. However, I've no complaints. The boys, as I always knew they would, put a tremendous effort in, but perhaps we lacked just a bit of the quality that we are undoubtedly capable of to get more than a point. Print deadlines prevent me commenting on the midweek match against Rangers, but hopefully we will have given a good account of ourselves against the in-form champions. Aberdeen who pipped us to a Europa League place last season, are our first foots and met Falkirk on Tuesday evening looking to end a run of three defeats. This being a local derby and a festive fixture, there is bound to be a big crowd and hopefully, we can maintain our recent good record against the Dons. And on that note. I would like to wish everyone a very Happy & Prosperous New Year and hope that we can get 2010 off to a winning start.