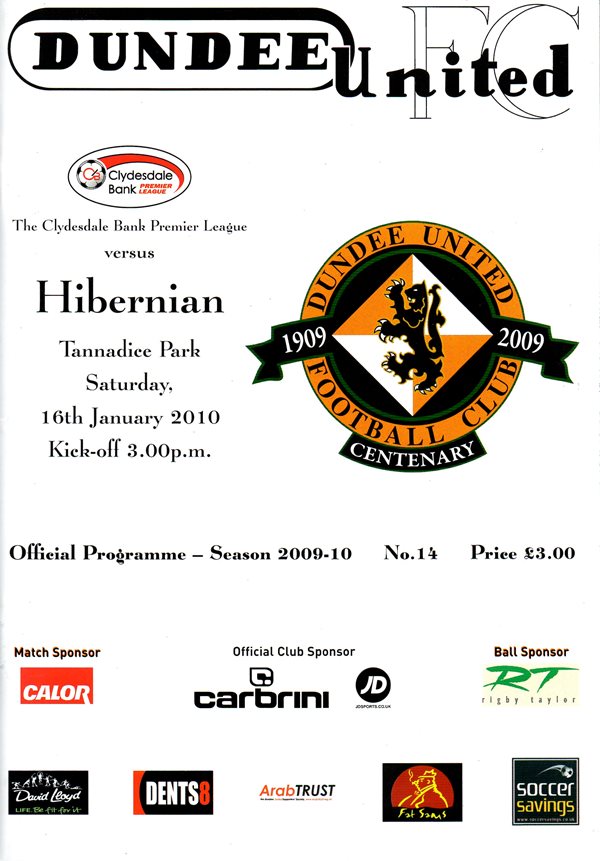 A glorious goal from Danny Swanson in 39 minutes turned out to be enough to lift United above Hibs into third place. This came after David Goodwillie had earlier missed a penalty during a first half dominated by the Tangerines. Despite Hibs threatening on a few occasions after the break, the hosts for the most part contained them comfortably and fully merited the victory.

United constructed a promising attack right from the kick off which, after good link-up play between Goodwillie and Swanson, ended with Prince Buaben screwing a shot well wide. Shortly after, the Terrors were almost ahead after a Dixon free kick from the corner of the box spun up wickedly off a Hibs defender and had to be palmed away from the top corner by Graeme Smith scrambling across goal. It was a positive start from United and Craig Conway forced a corner from an ambitious half volley from 25 yards before Jon Daly failed to connect properly from the set piece despite having a free header six yards out. Hibs goalkeeper Smith made another decent save on 25 minutes, showing good reflexes to prevent Daly netting from close range after an angled cross from Conway before United won a penalty in the 35th minute. Daly poked the ball through for Buaben who was taken out by Chris Hogg just inside the area, and after quickly consulting the linesman, the referee pointed to the spot. David Goodwillie stepped up to take the kick but Graeme Smith guessed right and pulled off a superb save before Goodwillie headed the rebound wide when it looked an easy task to lift the ball into an empty net. The hosts only had another three minutes to wait however before the deadlock was broken, with Goodwillie making amends as the provider. The United man broke down the right and slid in a sublime pass inside for Danny Swanson whose low right foot shot expertly found the bottom right corner of Smith’s net with the goalkeeper helpless. Pernis was called into action as half time approached, diving low to his left to save a good free kick from Riordan which was destined for the bottom corner. Right on half time it was nearly a second for United after Gomis dispossessed Murray in midfield before laying the ball off to Goodwillie whose right foot drive was only just defected wide off Murray, who had charged back to make up for his earlier mistake.

In the second interval, Daly made space for himself in the box before drilling a low shot which Smith blocked after the striker had been teed up by Goodwillie as United again threatened early on. Pernis then saved Hibs’ clearest chance of the match in 65 minutes as he showed a strong hand to a Liam Miller shot from the middle of the area. United were dealing with Hibs’ threat comfortably before with quarter of an hour remaining Swanson’s last involvement was to head a dangerous cross out of the path of Riordan as he was withdrawn in place of Myrie-Williams, appearing to have suffered a leg injury. There was a heart in the mouth moment for United as a Colin Nish downward header missed the target by inches before Pernis then pulled off his best save of the match with 11 minutes remaining, turning a powerful right foot volley from Hanlon around the post for a corner. Riordan then turned Webster in the box but thankfully for United the Hibs man scuffed his shot wide. Despite this late Hibs rally United contained them well for the last period of the match in the end were able to avoid any further scares as the shut out was secured.

There is no doubt the last seven days have been a big week for the football club. In the wake of Craig Levein's departure, results by everyone's admission were disappointing, but to come through two difficult games through in the west with two victories is hugely satisfying. went through a bad few days after Craig Left but seem to have come through that now. After the Aberdeen game, the players had a wee chat among themselves which I didn't know about, to sort some things out and it has shown in the way we have posted those wins at Partick Thistle and at Hamilton in midweek. There is no doubt that the defeat to Rangers at Ibrox hurt the players and backroom staff as much as the supporters. It was very much the low point after I took over. Particularly when you consider that for the first 20 minutes or so, Rangers didn't cause us any major problems. Yet we went in three down at the break, and after that by changing things by putting on another striker, it seemed to be doing okay, instantly getting a goal. Then for 15 minutes after that I got quite excited because we looked well capable of getting back into the match. But having given away three easy goats in the first half, the manner in which we conceded the fourth was embarrassing. And to then concede three more against ten men was unacceptable. We had a lot of good punters through there who spent a lot of money to get here and we let them and ourselves down big style. No Dundee United team should lose to Rangers or any team by seven goals to one. So it was embarrassing and I can only apologise to our supporters.

Unfortunately that spilled over into our last home game when our first half performance was very poor and Aberdeen looked the livelier lot. However, in the second half, we totally dominated, and when you think of the chances - we had thought we created more chances in the second half than Aberdeen did in the full 90 minutes - and therefore deserved to take something from the game. After those two disappointments, a Lot of people thought an upset was possibly on the cards when we travelled to Firhill last Saturday, but the battling qualities so Lacking in the first half against the Dons were back in abundance against Partick. Their keeper had three or four saves from Casalinuovo and the likes and kept them in the game. In fact the tie could have been wrapped up at half time. Credit to Thistle, they worked us for the full 90 minutes, but at no time did I think we were going to lose. Indeed the controversy over Damian's opener, which went in off his hand, though it wasn't deliberate, tended to detract from the fact that we deserved our 2-0 victory. The players had been a bit apprehensive after a few bad results, but I thought they were back on form at Firhill and we got the wee break that had eluded us recently. And there is no under-estimating how important a win last Wednesday was over Hamilton. It was hardly a classic, but we ground out a result and encouragingly kept a second successive clean sheet at two very difficult venues. I thought our centre-backs, Garry Kenneth and Andy Webster, were magnificent and in Dusan Pernis we have a new keeper who oozes confidence. I also thought we created some great chances and they probably should have made it a bit easier for me on the sidelines by converting a few more of them, rather than having to rely on Goodies well struck late winner It now sets us up for a cracker this afternoon against Hibs with the opportunity of leap-frogging them into third place. But that is only if we win and against John Hughes' attack-minded side that will be far from easy. but whatever the outcome, it should be a cracking contest for the fans of both sides.