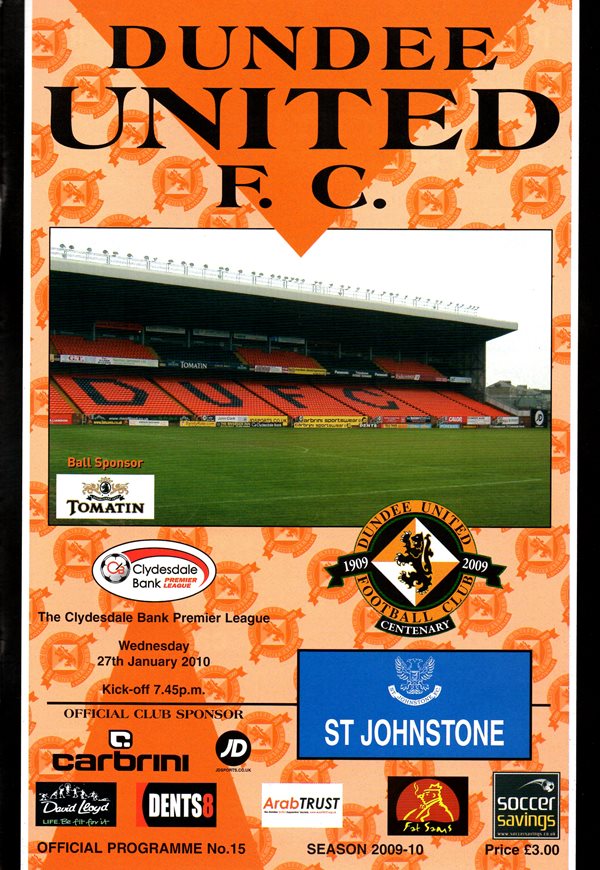 United and St Johnstone fought out a pulsating 3 – 3 draw at Tannadice. The visitors were deservedly two up at half time through MacDonald and Craig. It was a different game in the second period and United amazingly went ahead after goals from Daly, Swanson and Myrie-Williams only for Saints to hit back and earn a draw with a goal from Kevin Moon.

After their convincing win over Falkirk at the weekend there was only one change for the United line up for the visit of St Johnstone. Andy Webster had failed to recover from his injury and Darren Dods continued to deputise. Former United defender Danny Grainger lined up for the visitors.

Surprisingly, United started the game nervously and within five minutes they were behind when Peter MacDonald sprung the offside trap and fired past Pernis. Four minutes later, the Saints goal scorer went close again but his shot narrowly missed the target. United then had their first opportunity but Smith did well to hold a Conway free kick. With 20 minutes gone, the visitors doubled their lead when a Grainger throw deflected off Gomis and the ball landed perfectly for Liam Craig who made no mistake from close range. United offered very little in the opening period and in fact Saints could have been further ahead when MacDonald missed from close range.

Five minutes after the restart United were back in the game. Craig conceded a free kick on the by-line and Conway crossed to the head of Daly which made it four goals in two games for the Irishman. A minute later he had the ball in the net again but this time he was ruled offside. With just over 20 minutes left United drew level when the hugely effective Swanson smashed in a superb 25 yard volley which sent the home fans wild. Then two minutes later United were ahead when substitute Jennison Myrie-Williams cut inside from the left and hit a sweet left foot shot that deflected beyond the helpless Smith. To round off a remarkable five minutes Saints then drew level. Morais sent in a cross to the United penalty box and Deuchar nodded into the path of Kevin Moon who shot into the corner of the net. United looked the more dangerous towards the end with both Swanson and Myrie-Williams tormenting the visitors’ defence but the men from Perth held out.

To say things have gone well in the last couple of games would be something of an understatement and I couldn't be more delighted for everyone associated for the club. The wins over Hibs and Falkirk have made it four wins in a row. showing that the confidence has returned to the side after the initial sticky spell following Craig Levein's departure. Against Hibs, the players were magnificent and got in about them right away. Okay, the penalty that David Goodwillie missed might not have been one and there was a question mark over whether Goodie was offside when he picked up the ball before passing to Swanson for the goal. And that was all that separated the sides, having created a lot of chances, I felt we fully deserved our victory. For the game at Falkirk, my big worry was that complacency would set in after those three victories, But despite winning so comprehensively, all the lads were talking about when they came off was the fact that they had conceded a late goal to end our run of clean sheets. Throughout the 90 minutes, we were very professional and I thought our midfield was sensational, along with our front two, and we defended really well as a team. We thoroughly deserved to win whilst it's difficult to pick out any individual, because it was such a terrific team performance, after his three goats, it would be amiss not to mention Jan Daly. Everyone I am sure was delighted for him after all he has been through. He's had a series of serious injuries and must be the unluckiest player Craig (Levein) ever signed. But he's shown the right mental attitude and he's a real man's man. To his huge credit, he's managed to clear his head of any negative thoughts and has worked his socks off to get where he is. Thanks must also go to Jeff Clarke, our physio, for the work he s done, but Jon’s attitude has been spot on and I don't think anybody would begrudge him the success he's had since he returned. Inevitable, after four straight wins, my stance of not taking the manager's job has come under scrutiny.

For the moment, however, all I am doing is taking things one game at a time and I still believe that long-term, it may be better for someone else to come in as manager. But we will just have to wait and see. I am not going to say I am going to take it to the end of the season. I'll see what the board have to say and we'll take it from there, but really right now we are winning games and I don't want the talk to be about Peter Houston, I want it to be about the team, All along I have said I want to take one game at a time and having got back on track, the aim is to finish as high up the League as possible. Tonight St Johnstone come to Tannadice and it is a pleasure to welcome United old boys Derek Mclnnes and Tommy Docherty back here. They have done a smashing job getting the club promotion last season and doing well in the SPL this term. Certainly, I won't be reading anything into them losing 4-1 to Celtic at the weekend. So far, I've only see the second-half of the game, but by all accounts they did well in the first half. And you have to recognise that when you lose a man against the Old Firm you are up against it. Normally, Saints are normally well organised and a hard team to beat. And that's what I anticipate we'll be up against this evening as we look for a fifth straight win. Unfortunately, the calf injury that forced Andy Webster off early on at Falkirk looks as though it might keep him out. So we are sweating a bit because we only have three out and out central defenders available just now and the other two both picked up injuries during the game. Garry Kenneth had a sore knee and Darren Dods had a problem with his thigh, so it's fingers crossed that both are in their usual places this evening.