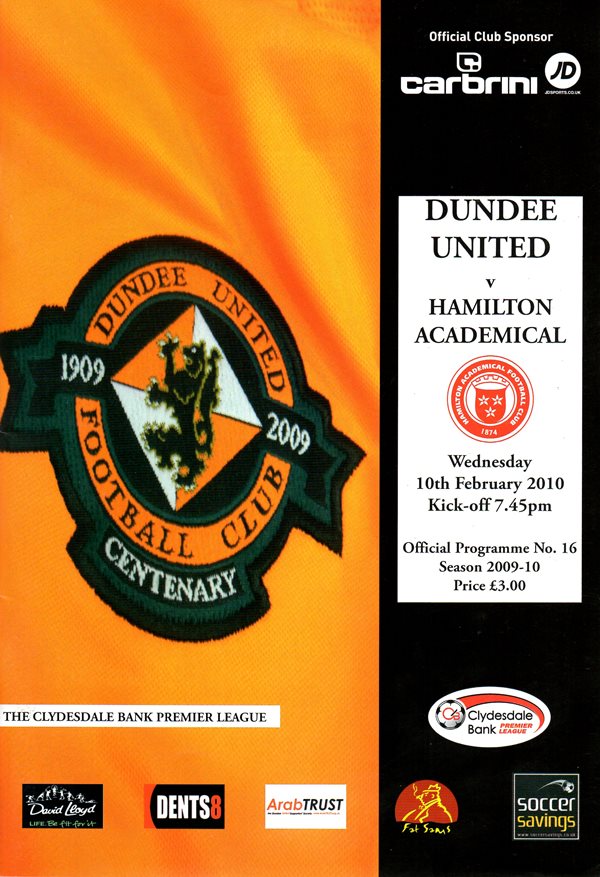 It was a bitterly disappointing night for United as first half goals from the Paixao brothers Flavio and Marco were more than enough to take the points after what was the home side’s worst performance of the season at Tannadice.

United threatened inside the first couple of minutes as a through ball from Gomis was neatly flicked into the path of Daly by David Goodwillie, however the early shot from the Irishman was straight at Hamilton goalkeeper Tomas Cerny. Unfortunately for the United fans in attendance this was as close as their team would come during the opening 45 minutes as Hamilton won the battle in midfield and as a result looked the sharper team throughout. They took the lead after 24 minutes when Flavio Paixao lofted a slightly mishit shot high into the net which caught out goalkeeper Dusan Pernis. After surviving a couple of scares, United looked to be heading into half time with only a single goal deficit but right on the stroke of half time the Paixao brothers combined to put the visitors 2-0 ahead. Firstly Flavio saw a header saved by Pernis before Marco poked the ball high into the net much to the frustration of all connected with United.

Something needed to change drastically for United and with that in mind Peter Houston withdrew Daly and Conway in place of Casalinuovo and Myrie-Williams at half time. There was a great chance for Prince Buaben after 51 minutes when good work by Goodwillie on the left followed by a well timed cut back resulted in the Ghanaian lifting the ball high over from 6 yards out. Andis Shala was thrown on up front in place of Mihadjuks as Houston went for broke with a 3-4-3 formation with just over half an hour left and immediately Shala could have put his team back in it, but Cerny saved superbly from his close range header. Gomis then set up Goodwillie inside the box and the striker brought out a decent save from Cerny with his low drive. A driving run from Myrie-Williams ended in a foul at the edge of the box which allowed Swanson the chance to make a United breakthrough but his free kick dipped just over the bar in the 67th minute before Myrie-Williams then struck a decent shot from 20 yards which sailed just over. After looking like working their way back into the game for a spell after half time the game just petered out again as Hamilton went on to take a deserved three points and deal a blow to the Tangerines European aspirations.

First of all. I must say how honoured I am to become manager of Dundee United and delighted things have been resolved after a period of uncertainty. And all credit for that must go to the players to whom I owe a big thank you. First of all for backing me, and secondly for the way that they rallied after the 7-1 defeat at Ibrox by winning four and losing just one of the next half dozen games. More than a few questions were asked of them after that Rangers game, but deep down I knew they would bounce back. The boys answered their critics in the best possible way and deserve loads of credit for the turn-around. I would never have been speaking about becoming manager had the lads not rolled their sleeves up when it was most needed. It's a relief that everyone knows what's happening because when any club Loses their manager there's always a degree of uncertainty. It means the players and now with Paul Hegarty at my side also on board can fully focus on the job in hand, which is qualifying for Europe, not to mention continuing our Scottish Cup run. Appointing Paul was on one of the first things I did and I am delighted to welcome him back to the club where he needs absolutely no introduction. From our time together at Hearts I know him to be a first class coach who'll fit in perfectly with the way we train and play. We improved every year when Craig Levein was here and if we can do that again this season then, as I am sure all our fans will, be thrilled. Mind you, the two league games that followed certainly took everyone on roller-coaster rides. Frankly, we never turned up in the first half against St Johnstone, so much so, I was actually happy we only went in two down at the break! But great credit to the players in the second half as they piled on the pressure and the real Dundee United turned up. All credit to the players for that. because they knew they had let themselves down in the first half and the one negative after the break was having forged in front, was to lose the lead within a minute or so. Having said that, I do think a draw was a fair result. To come back from two down says a lot about their character.

If that was a point gained, then the four-all draw at Kilmarnock has to go down as two points dropped. When you are 3-1 up away from home, you think you can go and win the match. But credit to Killie for the way they came back. The biggest disappointment was that all four goals we lost stemmed from comer kicks. Especially when you consider that I don't think in the three years that I have been here that we have lost four goals from corners! It was far from all negatives though, because we scored three fantastic goals and I must praise the players, because they went at Killie right from the start. It shows that we are an attacking side and quite exciting to watch, but it was disappointing that having scored seven goals in two games, we only had two points to show for it. Naturally, working on set pieces was the order of the day ahead of last week's Scottish Cup tie at StJohnstone. So it was doubly pleasing to progress past Saints and keeping a clean sheet at the same time. Everything about a good performance starts at the back and the defence was magnificent after all the goals we had lost. Ahead of them, Craig Conway was a constant threat and the two strikers worked their socks off in what was a great team effort all round. We always knew that it would be a tough tie, but I was delighted how we came through it. The one drawback was the injury to Paul Dixon which rules him out for this evening’s match and the next three weeks. When it became apparent that it would leave us a bit short defensively, I moved quickly to secure Pavels Mihadjuks' services until the end of the season. He is a quality defender with a real presence and not only provides us with immediate and quality cover, but also allows us, and the player, time to see whether this short term deal should be extended beyond then. Hopefully, his clearance will come through to be available this evening because as we know from our previous encounters with Hamilton, these are always keenly contested and we'll need alt hands on deck.