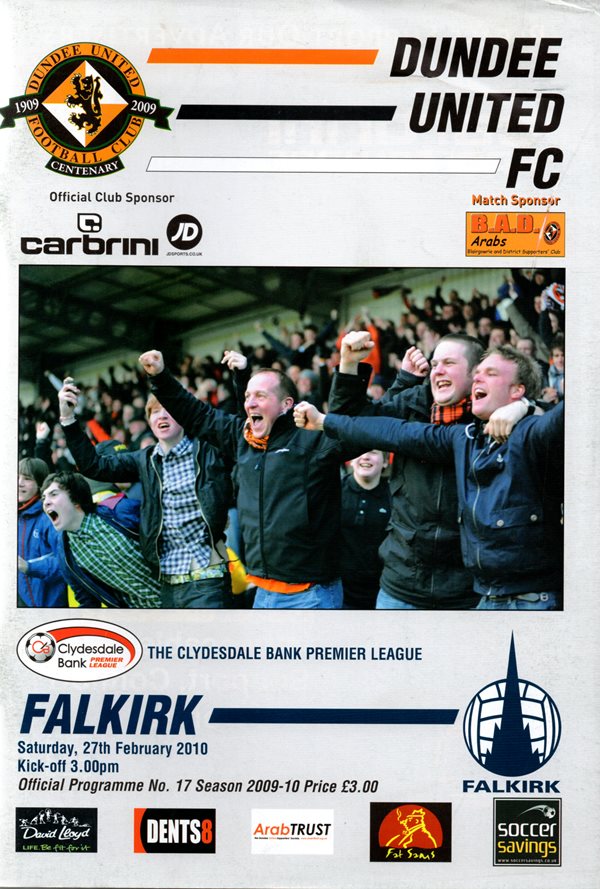 There was good news and bad news on the injury front for United ahead of the visit of Falkirk. Paul Dixon made his return however both Andy Webster and Jon Daly missed out. That meant that David Goodwillie and Darren Dods returned and Sean Dillon had to be content with a place on the bench.

United started brightly and with three minutes gone the returning Dixon combined with Conway to set up Casalinuovo who saw his near post volley well saved by Olejnik. Ten minutes later United had a great chance to take the lead when Conway swung in a fine cross that Casalinuovo knocked into the path of Goodwillie but the unmarked United forward failed to hit the target. A minute later however the striker made amends. He collected the ball in the Falkirk box and despite failing to control the ball properly he was tripped by Scobbie and the referee awarded a spot kick. David Goodwillie himself stood up and took the penalty himself and sent the ball into the corner of the net to open the scoring. Four minutes later the visitors had their first effort on goal when Showunmi set up Lima who fired a shot straight at Pernis. United were next to pose a threat when Swanson mad a fine run into the box and his lobbed effort just went over the top. A minute later though United did double their lead. Goodwillie made a blistering run into the penalty box and his low shot was well saved by Olejnik. The ball fell into the path of Conway who then hit the post but the rebound fell to Morgaro Gomis and he smashed the ball into the net. With two minutes of the half left United had a chance to put the game out of sight when a cross field pass from Goodwillie picked out Conway but the United man saw his shot go inches wide of the target. In the dying seconds of the half Falkirk won a free kick in a dangerous position but this time it was O’Brien that fired straight at Pernis.

Within a minute of the restart Arfield became the first man of the afternoon to be cautioned for a foul on Goodwillie. A minute later United went close again when Swanson squared the ball to Conway but the former Ayr United man hit a shot that was blocked by his team mate Darren Dods. Goodwillie was having a great afternoon for United and with 50 minutes gone he made a fantastic run and beat three defenders and sent in a shot that was superbly tipped over by Olejnik. Healy then came on for Falkirk in place of Moutinho and within minutes of his introduction he was booked for dissent. Vitor Lima then had a chance for the Bairns but he lashed a shot well over from 12 yards. Lima was again involved when he took advantage of a Dixon error and he passed to Enoch Showunmi but the on-loan striker saw hit shot once again save by an in form Pernis. With 20 minutes left Steven Pressley made another change when Jack Compton came on in place of Ryan Flynn. The substitue then won a corner for the visitors and from that the ball fell into the path of Lima who shot just wide from 20 yards. It was United who always looked the more dangerous and twice within a five minute period Goodwillie got into great positions in the Falkirk box but just failed to get in shots. Between these efforts United had brought on David Robertson and Sean Dillon in place of Casalinuovo and Conway. However it was Peter Houston’s final change of the afternoon that made the biggest impact. With a couple of minutes left young Dale Hilson came on for the impressive Goodwillie and straight away he gathered the ball on the right and sent in a low cross to the near post and Morgaro Gomis shot past Olejnik to secure all three points and score his own second goal of the afternoon.

Our last home game against Hamilton was probably our poorest performance of the season and that is saying something, when you consider that 7-1 defeat to Rangers at Ibrox in December. However, it was the same bunch of guys who had done so brilliantly for me, going seven games undefeated, so it was very difficult to be too critical, but on the night none of them earned pass marks. Not only didn't we defend properly, but we handed them the initiative, and, in the middle of the park, didn't win any tackles. Also, up front we didn't head the ball on. And when you have all that going on at the same time, you are never going to get a result. I took one look at them and could see from their body language that they felt they had let their standards slip Whilst I didn't need to tell the players they didn't play well, I still did so. But they are an honest bunch and all credit to them for the way they picked themselves up and showed the character to come back and win at St Mirren just three days later. Having gone a goal behind, we tried everything, had three strikers on and with seven minutes left, I'd have to be honest and say I didn't see it coming, but was obviously delighted with the three points. I hate making excuses but when you take into account that Wilkie, Webster, Scott Robertson, Kovacevic, Dixon. Sandaza, Cadamarteri -all of whom are first-team players - were missing, we were really down to the bare bones. So to get through that game after having to so many jerseys was a tribute to the players' full marks to them, especially as we haven't played particularly well, but still came away the win thanks to Danny Swanson and David Goodwillie's late strikes.

Having Mihael Kovacevic and Andy Webster back last week was a boost, as we took on a Celtic side that had several layers missing, particularly in defence. But it proved a very frustrating afternoon for us. First half, we showed them too much respect and never created anything. Indeed at the break, I told the lads I would rather they get beaten 7-1 whilst having a go, rather than what little we had offered in attack. It was disappointing that with Celtic showing a lack of confidence, that we didn't do enough because of a lack of our own self-belief. True, we had a bit of a go in the second half with some chances here and there, but it wasn't enough to pull back Robbie Keane's first half opener. Whilst Celtic are always going to create chances, our keeper Dusan Pemis was up to anything, but had nothing really out of the ordinary to deal with which only adds to the frustration. Towards the end, they indulged in a bit of time-wasting, and it's not often you come to Celtic Park and see them do that which only proved that it was an opportunity lost. But that was only our second defeat of the season away from back to back home games coming up against Falkirk and Hearts, and only one win from our last six games here isn't good enough. This afternoon, we welcome Falkirk under new manager Steven Pressley. They had a terrific win over Aberdeen last week and will obviously come here with their confidence boosted, but we must make Tannadice a fortress again if we are to fulfil our ambitions of finishing third.