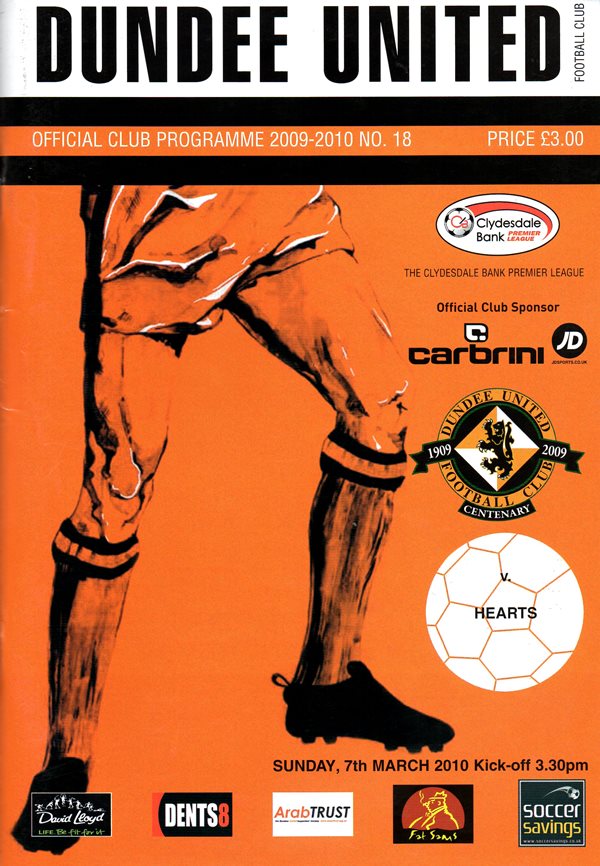 Interim boss Peter Houston made only the one change following his team’s comfortable 3-0 win at home to Falkirk the previous weekend with Andy Webster returning from injury to replace Darren Dods in central defence. Dods was listed amongst the subs as was Jon Daly who had also been injured the previous week. After just over nine months out there was a return for Francisco Sandaza, whose appearance on the subs bench provided a welcome boost to the Terrors. After Saturday wins for both Motherwell and Hibs this was a massively important match for the home side that knew a win would lift them back up to third place in the table. Despite having notable injury and suspension problems prior to the game, visitors Hearts were still sure to be tough opponents as they hoped to bring themselves back into European contention with a win.

It was a slow start but Hearts were slightly the brighter as they threatened initially through Arvydas Novikovas whose weak attempt was gathered easily by Dusan Pernis before Suso Santana went much closer after cutting inside and curling a right foot shot towards the bottom corner from 20 yards, with Pernis doing well to turn round for a corner. Jamie Mole then clipped a curling shot a couple of feet over from inside the box as the visitors asked questions of the United defence. United were struggling to get into the game but did have a shout for a penalty with just under quarter of an hour played as David Obua appeared to handle the ball on the ground under intense pressure from David Goodwillie, but referee Mike Tumilty waved play on. A corner after 19 minutes gave United an opportunity to test the Hearts defence and from the Conway delivery Garry Kenneth headed down for Goodwillie who smashed the ball away from goal and off Andy Webster before the visiting defence cleared. Another corner followed shortly after and this time Kenneth did test goalkeeper Janos Balogh who did well to block his left foot snap shot from 6 yards. There was another appeal for a United penalty when Goodwillie went down under a challenge from Goncalves but again no kick was awarded before Pernis bettered his earlier save after 23 minutes, diving superbly to his right to tip a Mulrooney drive round for a corner after Conway had lost possession in midfield. There was then a half chance for Ryan Stevenson but he couldn’t keep his shot down ten yards out when he should have done a lot better. The best chance for United up to that point came on the half hour mark when Gomis fed Goodwillie into space on the right side of the box however United’s top scorer drilled his shot wide when the keeper really should have been made to work. A dangerous ball across the face of goal from Mulrooney caused panic for United but a feint touch from Kenneth ensured a corner before a good cross from Goodwillie saw Prince Buaben tumble in the 6 yard box under the challenge of Santana but again despite the appeals no penalty was awarded. As half time drew nearer Casalinuovo just reached an angled Dixon ball ahead of Balogh but unfortunately his header sailed over before in the last action of the half a Swanson shot deflected safely into the hands of Balogh.

Goodwillie forced an early corner then Casalinuovo caused concern in the centre of the Hearts defence with a low cross as the tangerines looked to pressurise early on. In 53 minutes Goodwillie had another chance when the ball dropped at his feet after a Conway drive was blocked but he could only lift the ball over the bar from eight yards. An ambitious effort from Swanson flew wide before Prince Buaben missed a glorious chance for United on 64 minutes. Swanson played the ball down the line to Goodwillie who did well to hold off Obua before crossing inside for the United midfielder who bulleted a header wide from an unmarked position at the near post. Then as Danny Swanson drove at the defence space opened up for him to attempt a left foot curling shot which was straight into the arms of Balogh. With 20 minutes left Buaben had another great chance when Conway teed him up around the penalty spot and the Ghanaian’s side foot shot was well blocked by Hearts’s Ryan Stevenson as Balogh looked like he was about to be beaten. Buaben was heavily involved in an attacking sense for United and showed great ambition when striking a thunderous right foot shot which would have beaten Balogh all ends up had it not drifted wide of his right post. No sooner had Fran Sandaza received a rapturous reception from the United faithful following his long awaited return from injury than his side finally found themselves in front in the 78th minute. Following a foul on Kovacevic on the right flank Conway delivered a good ball into the area which eventually fell to Morgaro Gomis 10 yards out after Kenneth had an initial effort blocked, with the United man continuing his goal scoring exploits of the previous week by stepping inside and seeing his shot deflected into Balogh’s left corner to the obvious delight of the fans behind the goal. United broke on several occasions late on as Hearts tried to push forward and they couldn’t make the most of a mix up in the box which saw Gomis just fail to reach the loose ball with Balogh completely exposed. Conway sent a free kick over with a minute left as the hosts tried to clinch the points and they were nearly gift wrapped in injury time as the lucky Goncalves only conceded a corner when his attempted header back to Balogh was off target so a corner was the end result. In the end though Gomis’ strike was enough to claim all three points and a return to third spot. 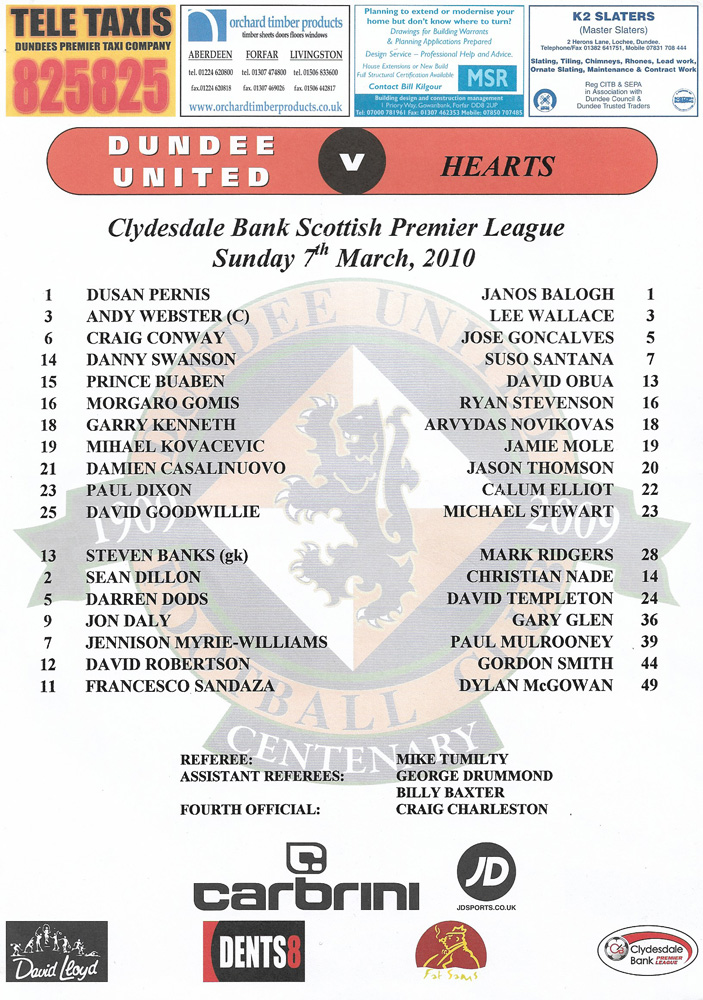 Before last week's game against Falkirk, I asked the players to make Tannadice a fortress once more. And with a 3-0 win over Falkirk, the boys responded brilliantly. Indeed, I thought we played exceptionally well in the first half and ought to have been more than two up. David Goodwillie did exceptionally well, especially considering that he is still being troubled with an injury. And it was great to see Morgaro Gomis chipping in with two goals, because getting more goals from the midfield is something we have been looking for. I knew that Falkirk would come back at us and made it clear to the players at the interval that the third goal of the game would be vital and to make sure that we got it. We did, but must admit, I would have preferred we had scored it a bit earlier! That win combined with Hibs drawing with St Johnstone, took us back up to third in the table. But good as that is, it doesn't matter to me at the moment, because, the only time it counts if we are still there on the final day of the season. There are still a lot of games to be played and none are easy in the SPL.

This afternoon we welcome Hearts and again it is a case of making sure that we make the most of having home advantage. But with Hearts having built up a bit of a head of steam with three straight wins under Jim Jefferies and Billy Brown that is going to be far from easy. Andy Webster missed the Falkirk match, but he did start Scotland's game against the Czech Republic, but had to come off at the interval. Having been with Scotland, I know that Andy was fine in training, but his calves felt a bit tight during the first half. Obviously, that's a wee bit of a concern, because it's something that has been bothering him on and off for a while now and we'll have to wait and see if he'll be available this afternoon. But the good thing is that Darren Dods and Garry Kenneth played very well in central defence against Falkirk last week, and I have no concerns about going with them again if I have to. Indeed, if all three are fit it is going to be a difficult choice. Whilst Paul Dixon and Garry Kenneth didn't get a run on Wednesday, just being with the Scotland squad for a few days was valuable experience for the pair. In fact, Dicker was very close to coming on Late in the game. In the closing minutes we were a bit concerned that Lee Wallace was beginning to tire a bit, so we got Dicker stripped, but I know Craig is always reluctant to change a back four and it was the right decision for the team to leave things as they were. What we both must now concentrate on is maintaining the kind of form with United that saw them called up in the first place. And that applies to all the lads after last week's win over Falkirk, because it will require a performance at least as good, if not better than Last week. if we are to take the three points this afternoon.