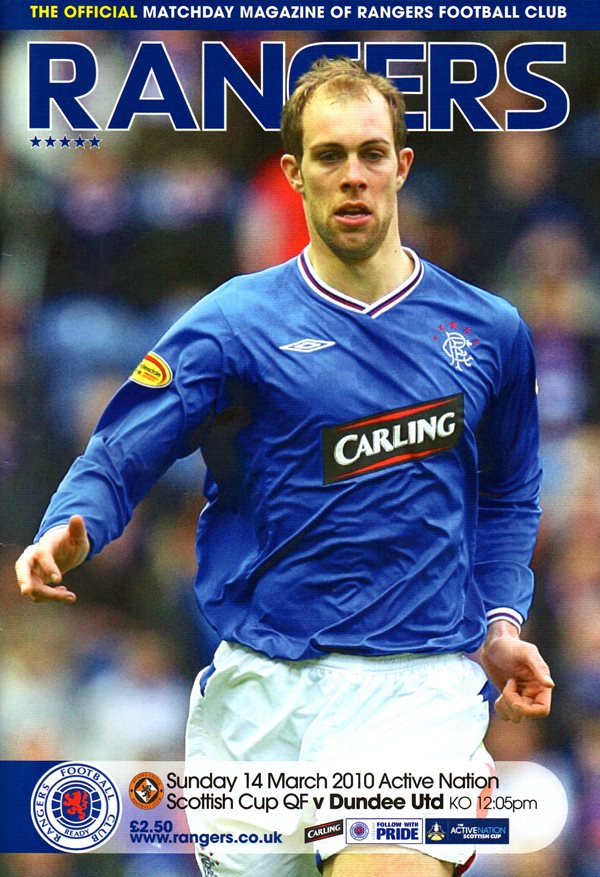 United travelled to Govan without Andy Webster, as the terms of his loan agreement rendered him unable to play against his parent club, meaning Darren Dods came in alongside Garry Kenneth at centre half. Paul Dixon was also missing after suffering an ankle injury in the previous week’s match with Hearts, so Sean Dillon deputised at left back. Otherwise, Manager Peter Houston started with a familiar 4-4-2 line-up with Jon Daly and Damien Casalinuovo spearheading the attack.

However, the Manager was forced into an early change when the Argentine striker pulled up with what looked like a hamstring strain after just two minutes. Andis Shala replaced him, and it didn’t take him long to make an impact. The German’s first opportunity came in the 18th minute when Prince Buaben won the ball in midfield and played him in on goal, but just as he was about to pull the trigger the defender slid in to make a brilliant last ditch tackle. Rangers then had a chance to take the lead when Dods gave the ball away to Kenny Miller inside his own half. Miller carried the ball to the edge of the box, but he pulled his shot wide of the post. However, it was United who broke the deadlock midway through the first half when Daly intercepted Steven Whittaker’s pass across the defence to send Andis Shala in on goal, and the striker made no mistake as he slid the ball under Allan McGregor to put the Tangerines 1-0 up. The goal was United’s 50th of the season and moments later Shala almost returned the favour for Daly when he played his strike partner through, but the Irishman’s touch let him down and the chance was gone. United were looking comfortable but an error in midfield allowed Miller to be sent through one-on-one with Dusan Pernis. The former Celtic striker rounded the keeper and was brought down but Pernis clearly got a touch to the ball, only for referee Dougie McDonald to point the spot. Kris Boyd stepped up and fired the ball into the bottom left-hand corner to make it 1-1 after 34 minutes. And, as the interval approached, the home side were awarded another dubious penalty. Boyd went down after a shoulder-to-shoulder challenge with Dillon, and despite the defender’s protests, Rangers were handed a golden opportunity to take the lead. Kris Boyd dusted himself down and this time slotted the penalty into the bottom right-hand corner – wrong-footing the ‘keeper to give Rangers a 2-1 half-time advantage.

United’s cup hopes looked all but over in the first minute of the second half when Rangers scored a third goal. The Tangerines were on the attack but Danny Swanson tried to take on one player too many and lost possession. Rangers broke forward and the ball was played through to Nacho Novo on the inside right position, and the former Dundee man shot across Pernis to make it 3-1. The home side could have extended their lead when Steven Davis crossed for Boyd. He headed the ball goalwards, but Pernis saved comfortably. Walter Smith’s team appeared to be cruising to victory, but United gradually fought their way back into the match and with an hour on the clock showed that they weren’t ready to go out of the competition just yet. Craig Conway played the ball out to Dillon on the left and he swung a cross in with his left foot. The cross was met by Shala, but his header drifted just wide of the post. However, the away side did manage to reduce the deficit in the 63rd minute. Conway’s corner was headed clear but only as far as Morgaro Gomis some 25 yards from goal. He fired in a volley that seemed to be going well wide, but Steven Whittaker got in the way and headed the ball into his own net to give United a lifeline. The comeback was complete in the 79th minute when another Conway corner was met by Shala who headed the ball on to the crossbar, but Mihael Kovačević was on hand to head home the rebound for his first goal for the club - sending the travelling Arabs into raptures. In the closing stages of the game there was even a chance that United might have grabbed an astonishing winning goal but it wasn't to be and the Terrors had to settle for a replay which had looked so unlikely at one stage in the game.

Peter Houston praised the attitude of his players after watching his young team come back from 3-1 down to earn a replay. He said: “I never thought at any time that we would collapse like we did in the 7-1 game. We were hardly started when we had to make a substitution when Damian Casalinuovo pulled up and we replaced him with Andis Shala, but that actually worked for us.” Houstie added: “To lose three goals to Rangers at Ibrox usually means you’ll lose and when we were 3-1 down I decided that we were out the Cup and so we had nothing to lose by putting Robertson on and telling the players to push up at corners and free-kicks and it worked – Kovacevic never scores with head.”