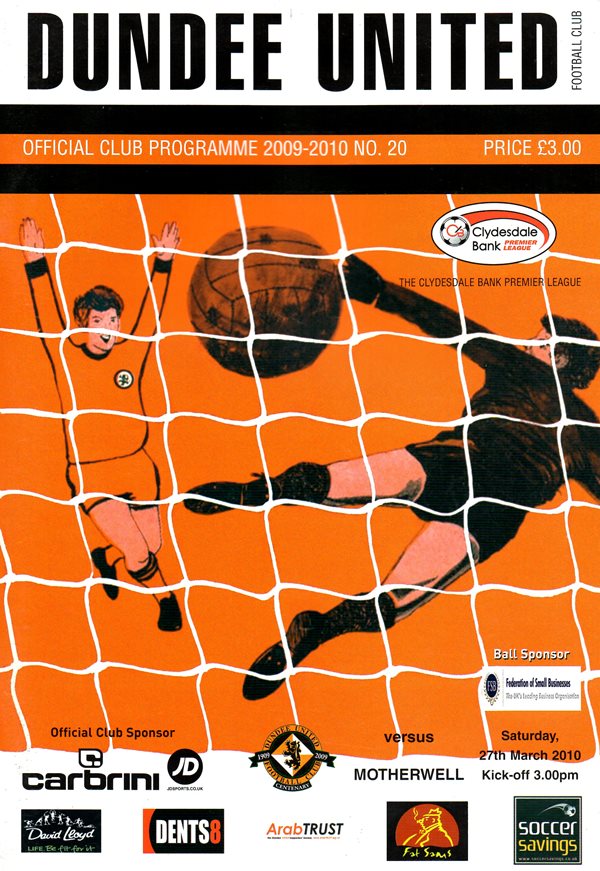 After the jubilation of the previous Wednesday's cup success over Rangers, there were fears of a hangover as United welcomed a buoyant Motherwell side to Tannadice. The Steelmen arrived in Dundee in fine fettle having won eight of their last eleven games during an unbeaten run that stretched to the turn of the year, enabling them to climb to fourth place, just a point behind United. However, United stopped that unbeaten run in its tracks with a magnificent 3-0 win, and all the more impressive in light of Paul Dixon's dismissal after just 16 minutes. Peter Houston's chopped and changed his side that defeated Rangers in midweek. Danny Swanson replaced injured goalscorer David Robertson who was among five players dropping out. Ineligible Andy Webster replaced Darren Dods; Keith Watson started in place of the injured Mihael Kovacevic; Gomis was on the bench with Sean Dillon moving into midfietd and Jon Daly partnered David Goodwillie instead of Andis Shala.

But it was the visitors who set the early pace early. Within the first minute Tom Hately delivered a telling free-kick into the United penalty area that flew narrowly past. Five minutes later, Keith Watson did well to clear a Lukas Jutkiewicz angled drive from the right. It was ten minutes into the match before United threatened the opposing goal; but Garry Kenneth failed to connect with Craig Conway's comer, before the 'Well defence cleared. Controversy arrived after 16 minutes when Paul Dixon was sent off by referee WilLie Collum for a high challenge on former United man Jim O'Brien. Despite Dixon's departure, Peter Houston remained positive by persisting with two upfront. The red card raised the tempo, with United now on the offensive. David Goodwillie came close to opening the scoring after a deft lift over the approaching 'Well keeper John Ruddy landed marginally the wrong side of the left-hand post. The Steelmen should have taken the lead in the 27th minute after O'Brien's cross into the box went to the unmarked Jamie Murphy, but
the striker directed his header wide from ten yards. It was a glaring miss, demonstrated by Murphy's reaction, and one that his side would rue. But Motherwell thought they had taken the lead after 31 minutes when John Sutton's inadvertent rebound from Keith Lesley's shot flew into the net; however Sutton was deemed offside and the goal was disallowed. United's chances continued to come from comers, and brought reward in the 38th minute when Conway's testing delivery was met by the unopposed Andy Webster, whose header was goal-bound before Goodwillie made sure from close range. The goal galvanised United, and it was to get even better five minutes later when the Lead was doubled. Prince Bauben chased down a Stephen Craigan back-pass, and 'keeper Ruddy Looked uneasy before mis-controlling the ball and allowing Bauben to win possession. The midfielder confidently sold Ruddy a dummy, before stroking the ball into the empty net from nine yards to give United a surprisingly commanding interval lead.

Three minutes into the second half, Motherwell had a second goal chalked off. A Steven Hammell comer from the Left fell to Murphy on the six-yard box, but the striker made a hash of the shot and United cleared. But the clearance didn't travel far, and the ball was returned to Jutkiewicz, whose impromptu shot struck the post before Murphy followed it in by sticking the ball between the sticks from a yard out. However, Jutkiewicz was ruled offside. The game then became rather scrappy, with a resilient United defence frustrating the attacking away side. The game was in the doldrums as the Tangerines continued to hinder 'Wells attempts to get back into the game, Pemis being rarely troubled. After 73 minutes, Motherwell won a corner, however the set-piece came to nothing and United hit them on the break. Conway played the ball out to Goodwittie on the right, and the striker travelled with the ball before feeding Swanson in the centre. The defence opened up for the impressive midfielder, who confidently finished from the edge of the box to score the third that ensured victory. Motherwell responded almost immediately by making another two substitutions. with Michael McGLinchey and Giles Coke replacing Jutkiewicz and Keith Lasley. With a quarter of an hour remaining, Jim O'Brien mishit a shot that fell to McGlinchey, but the substitute could only hit a tame shot straight into Pemis's arms. Peter Houston brought Fran Sandaza on for the industrious GoodwiLlie after 77 minutes. A minute later. Coke's shot from the edge of the box was comfortably held by Pemis. With nine minutes left, Webster went off after suffering a gash to the head, and was replaced by Darren Dods. Coke again hit a lacklustre effort, this time from ten yards out, Pernis saving easily. With the win ensured, United were content to soak up the pressure and see the game out. Coke hit a third tame effort in the final minute following good play by Murphy on the left. 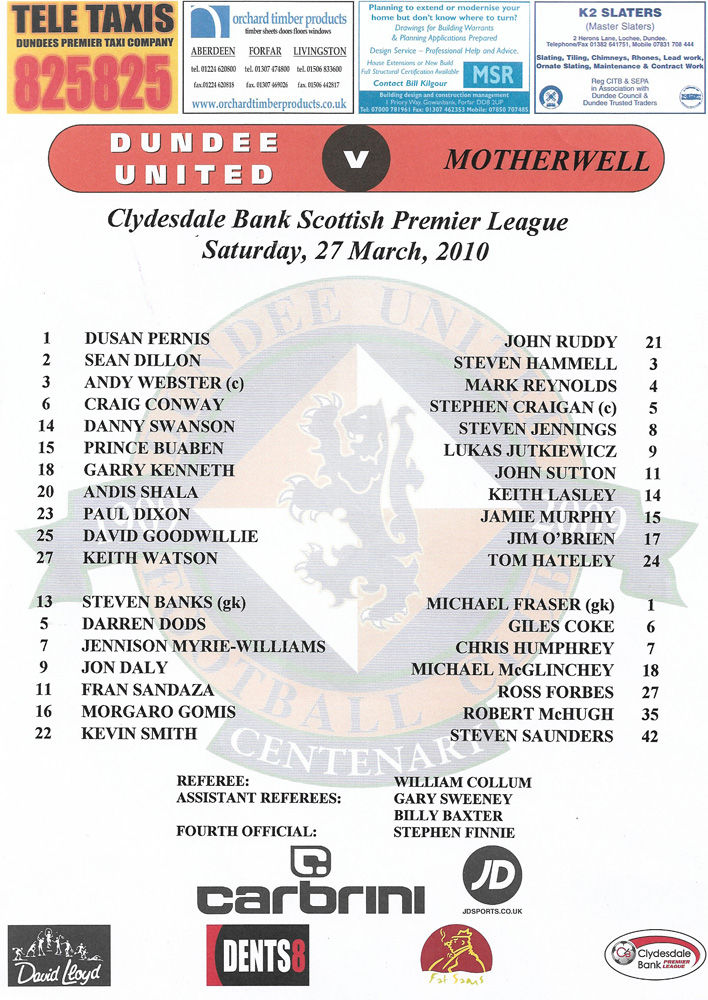 Wednesday night was a magnificent occasion for everyone connected with Dundee United. I'm so proud of the players because they sent our fans home singing and looking forward to a cup semi-final against Raith Rovers next month. From the goalkeeper to the strikers, we merited our victory and I'm absolutely delighted. First half, I thought the players were magnificent, but the only nagging worry was that hadn’t been translated into goals as we dominated almost the entire opening 45 minutes. Additionally, I must confess to being a little concerned that maybe we had put too much into the game, and for a spell in the second half Rangers started to take control with the midfield looking a wee bit tired. But we dug in and demonstrated the same sort of resilience and character Rangers had shown on Sunday in the League Cup final against St Mirren to keep going. Having weathered the storm from Rangers, we started to take control again. With extra-time looming - the last thing I wanted, all of a sudden, David Robertson goes in on a ball and while their keeper may have been a wee bit unfortunate as the two of them come together the ball has gone into the net. And I've never been so pleased to see anything going into the net. But there is no doubt our fans played a major part in us going through. They have been great since I came to this club, but this season they have been even better. Even when we had bad results—like the defeat to Hamilton here—the next game they were up for it, cheering us on. When we flagged a bit in the second half on Wednesday, they were there to lift the team. I am so, so pleased that we have sent them home happy.

Having earned the right to meet Raith in the semis, I know their manager John McGlynn very well and he'll make sure that's another very difficult tie. But before then, we have three vitally important league matches on which to focus. After the defeat by Hamilton, I called for the Players to make Tannadice a fortress once again and with wins over Falkirk, Hearts and now Rangers, they have provided me with exactly what I wanted, especially as we haven't conceded a goal. Our demanding schedule continues with the visit of Motherwell, currently the form team of the SPL-under Craig Brown and Archie Knox they have strung together a superb run and that hasn't surprised me, because they are two people in the game for whom I have the greatest respect and admiration. So, with both clubs chasing third spot, we'll have to approach this game in exactly the same manner as the midweek game against Rangers. But the two side's preparation for this clash could hardly be more different. Motherwell haven't played for a fortnight since beating Hearts, whereas we have played twice in the Last eight days. Inevitably that has had its consequences and the hamstring injuries suffered by Mihael Kovacevic and Morgaro Gomis mean they wilt be struggling to make it this afternoon, though with a bit of luck, Paul Dixon will be available. But irrespective of those injuries, I would have been contemplating a couple of changes to freshen things up after Wednesday's exertions. And that is one of the beauties of having a big and strong squad that has proved itself time and time again this term and hopefully, this wilt again be the case this afternoon.