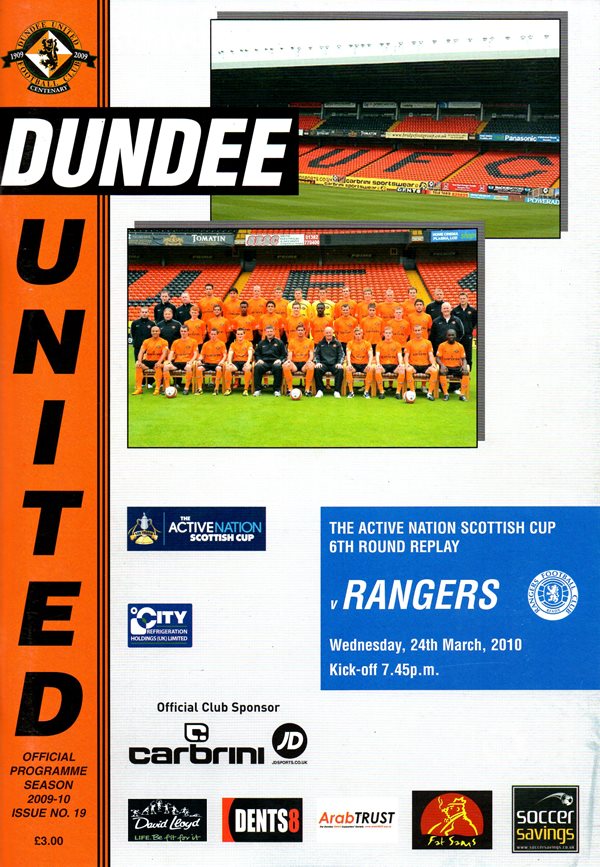 Peter Houston made two changes to the United line up for the Scottish Cup replay against Rangers. Darren Dods came in for the ineligible Andy Webster and there was a starting place for David Robertson with Danny Swanson dropping to the bench. Surprisingly the visitors started without Boyd, Miller and Novo all of whom were listed as substitutes.

United started the game full of intent and with a minute on the clock McGregor made a great save from Daly. A minute later United went close again when a long throw from Kenneth found Conway who shot narrowly wide. John Fleck then threatened for Rangers but after beating three United men his shot was blocked and cleared to safety. Shortly after that United were almost in front when Kovacevic, who had scored in the first game to force the replay, lobbed McGregor from the edge of the penalty area but once again the ball just missed the target. United were really playing well and with 25 minutes on the clock Kenneth launched another long throw into the Rangers box and the ball landed at the feet of Buaben who tried to lob the ball over McGregor but unfortunately the ball landed on the top of the net. United were then desperately unlucky not to be in front. David Goodwillie did superbly on the right for United and he squared the ball into the penalty area and the ball deflected off Naismith and just missed going into the corner of the net. The main talking point of the half took place on the half hour mark when a clever free kick was sent in from Conway. The ball landed on the head of Daly who headed goal bound only for the ball to strike the arm of Lafferty and go out for a corner kick. In the aftermath Garry Kenneth was cautioned for protesting. David Robertson then followed him into the referees notebook for a late tackle on Maurice Edu. Andrew Little then hit the side netting after being set up by Naismith however the young Irishman was in an offside position. The last action of the half saw Kovacevic make a fine saving challenge on Fleck however at the same time he suffered a hamstring injury and unfortunately he had to make way with young Keith Watson taking his place.

A minute after the restart the dangerous Conway again created another chance for United but his low cross just failed to find a tangerine shirt. Ten minutes later the former Ayr United man then tried his luck from 20 yards but despite deflecting off David Robertson the ball was well handled by McGregor. Kyle Lafferty then made a surging run into the United box but he was undone but a great saving challenge from Darren Dods. Rangers then made their first change of the evening when Novo came on for John Fleck. Rangers were now looking more threatening and with 20 minutes left a dipping shot from Lafferty just cleared the crossbar. Morgaro Gomis had put in a good shift for United but his niggling injury caught up with him and he was replaced by Swanson with 18 minutes left. Just after that Rangers had a good chance to break the dealock when Beasley squared to the unmarked Little who fortunately for United miss-hit his shot and Pernis gathered easily. With a quarter of an hour remaining Rangers showed just what a strong squad they have when Kenny Miller came on in place of Lafferty. With 10 minutes remaining Naismith was booked for the visitors when he over protested after fouling Craig Conway. Almost immediately Miller threatened when he was set up by Novo but Pernis did well to save from the Scotland front man. Beasley then sent in a cross that the United keeper did well to flick clear and this was followed by a great chance for United when Dods had a free header in the box that he sent well wide. United must have thought they were destined for extra time when first of all Goodwillie had the ball in the net after being set up by Daly but the United man was harshly ruled to be in an offside position. Then just after that Robertson swung in a cross that Daly headed but McGregor pulled off a world class save. However the play continued and when the ball was lofted back into the Rangers penalty area David Robertson challenged McGregor and the ball spun off the United man and ended up in the back of the net to send the home support wild. There were a nervous remaining few minutes before the referee blew for full time to hand United a famous win and a place in the Scottish Cup semi final. 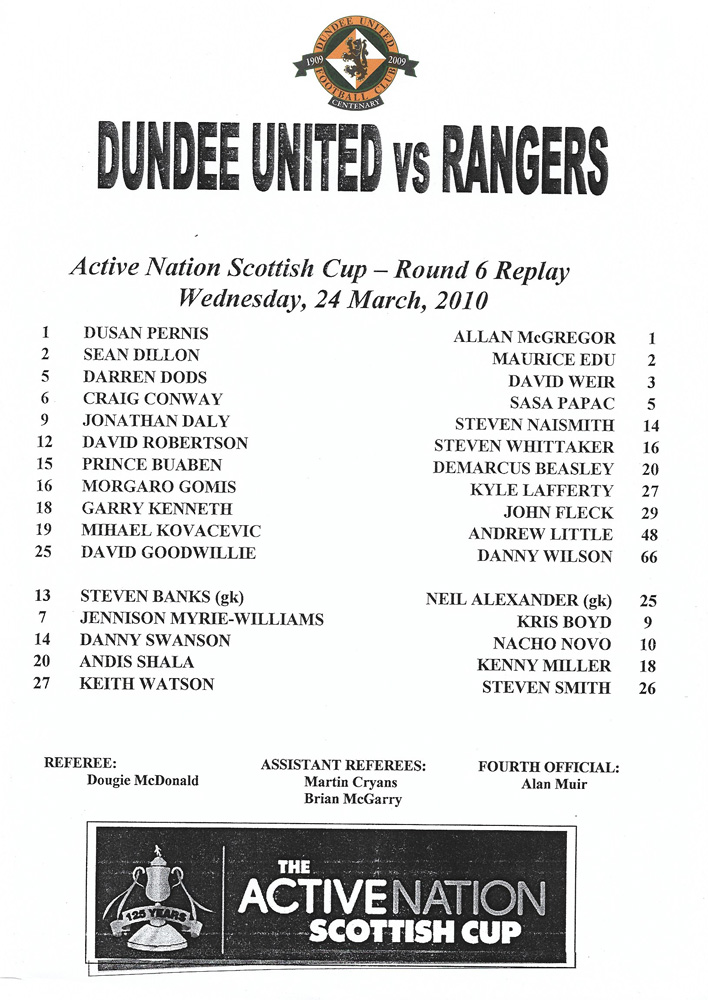 Tonight we welcome Rangers, who arrive here having just lifted the Co-Cup after beating St Mirren in last Sunday's final. And the one thing that match highlighted was Rangers' resilience. You certainly can never, ever write them off. They Look like champions-elect because they have such mental strength and character. You saw that when they went down to nine men on Sunday, they got narrower and defended realty well. Whilst I will admit that if Rangers are at the top of their game with the players they have and the money they pay, they should win. But if they drop 5%, then what I have to make sure is that we are right at them from the first whistle. And with the players we have, anything can happen because they too have shown that we are a team full of character. That night at Ibrox when we lost 7-1 in the league back in December I could see how much it hurt the lads. It would have been a problem if there were guys there who were not bothered by it, but I looked around and could see how much it hurt them. Character is something you have in-built, it is in your heart. When the going gets tough you need people to stand up. That is something Rangers have in abundance, but it is something I think we have as well. When they went up 3-1 against us in the last game a lot of People must thought it was all over, and we were on course for another 7-1. It was pleasing to see that the lads showed the character they have to come back and earn this replay. And I was so proud of their efforts at Ibrox, particularly in the adversity of losing two ties after Andis Shala scored a good goal to give us the lead. Then we went 3-1 behind, under no circumstances did I think we were going to fold. When you score three at Ibrox you probably expect to win the match, but we certainly deserved another shot at it. We had to go for it and when the equaliser came, we had Francisco Sandaza, Andis Shala and Jon Daly on. If I'd had another three subs, they'd have been off! Normally, Mihael Kovacevic doesn't go up for the comers, but I said "up you go, son". He scored with the head, and the one thing Mihael Kovacevic doesn't do is score with the head. But that is the kind of spirit that has taken us to third in the league and kept us in the Cup. We are confident we can beat anybody at Tannadice, but know how hard it will be tonight in what should be an open game, because Rangers don't come and sit in; they will have a go, as will we.