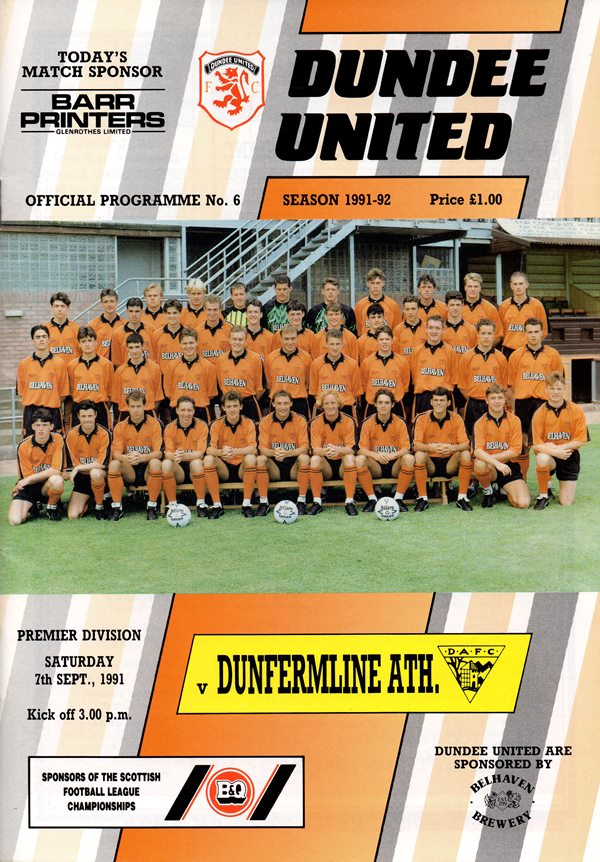 Atonement for that Skol Cup defeat was upper most in our minds as we faced Dunfermline four days after their freak 3-1 victory over us at East End Park. Within a couple of minutes Rhodes had twice been in action. First from Gary Bollan and then to keep out a deflected shot from Freddy Van Der Hoorn. Although it was United in those early stages, Dunfermline almost sneaked ahead in the 11th minute, but Alan Main tipped over a Gallacher header. That, however was the only serious action Alan Main was to be involved in during the whole match. Rhodes saved well from Billy McKinlay in the 27th minute and was then happy to see Duncan Ferguson send a shot just wide of the target. A goal, however, was only delayed and in the 32nd minute Maurice Malpas found Billy McKinlay who rolled the ball into Dave Bowman's path and he sent a right-foot shot curling into the top left-hand corner. It was one way traffic now and twice Rhodes saved from Billy McKinlay before the interval.

Quarter of an hour into the second half, Duncan Ferguson, playing only his third full match of the season due to injury, was denied by Rhodes outstretched body when the young striker was clean through. Play continued to flow towards the visitor's goal and skipper Maurice Malpas saw his cross come off the face of the bar. Despite our constant pressure it took us until the 74th minute to go further ahead. A deep cross from Gary Bollan out on the left found Freddy van der Hoorn at the far post and his low drive took a deflection off Moyes to enter the far corner of the net. It took a third goal in the last minute of the match to reflect on the balance of play. Again Gary Bollan was the instigator. He won the ball from Kozma out on the left, headed down the Hank before cutting the ball back to Duncan Ferguson who turned the ball past Rhodes.

The big striker injured an ankle in the process and was replaced by Paddy Connolly, making his first appearance of the season. The three goal winning margin equalled our best Premier win over the Fifers and although we exacted revenge for that midweek defeat in the Skol Cup, the general opinion was that we had in fact played better when losing four days previously which perhaps puts into context how hard it was to come to terms with defeat in midweek!

During the season, so far, I have justifiably been critical of certain players, but as regards Tuesdays match at Dunfermline, the manner in which we dictated play, our attitude and effort, I have absolutely no complaints.

However, when it came to trying to translate our outfield superiority
into goals, we were severely let down. How else do you explain only 16 of 31 attempts on goal being on target. Whilst Andy Rhodes did have at least three outstanding saves, for only fractionally over 50% of the shots and headers to be on target, is a poor ratio. Worse still, of 41 attempted crosses, no less than 28 found their way into the box, yet we only scored once and that doesn't include the twelve corners we had!

Such statistics all too readily identify that the strikers, particularly in the
box, failed to do their job.

We dominated Tuesday's Skol Cup tie in a similar way in which the Old Firm dominate games, though we can't expect to do that week in and week out.
I've said to the players often enough that if you are hungry for victory, you'll get it, and up to the 18 yard box, that attitude prevailed.

What let us down was our movement in the box and crucially, putting the ball in the net. I suspect that if Davie Dodds had still been around, we would have had a field day with so much ammunition into the box.

No matter how well Dunfermhne defended last Tuesday, and they did defend well, it wasn't so much a case of their magnificent rearguard action which got them through, but our inabilities in front of goal and lack of a natural finisher.

I have no doubt that Tuesday's defeat will have been very hard for our supporters to accept, but I can assure them that it has been equally unpalatable for everyone of the players.

Whilst not trying to make excuses, luck is an important part of footballing life and for the moment it seems to be in short supply at Tannadice.

All season the team has had to be chopped and changed, primarily due to injuries and now Billy McKinlayhas a groin strain which is why he came off at half-time at East End Park.

I sincerely hope Dunfermlme do well in the semi-final of the Skol Cup, they are a good club with a support, but hopefully, today we'll get a better rub of the green than we enjoyed last Tuesday evening.