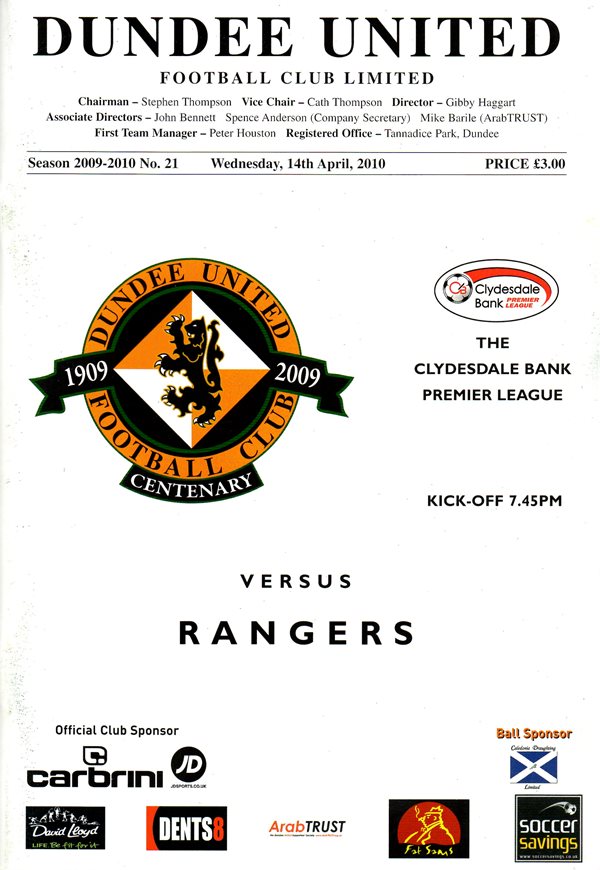 A battling display saw ten-man United hold on for a 0-0 draw at home to Rangers and consolidate their position as favourites to secure third place in the SPL.

Mihael Kovacevic was sent off midway through the second half, but not for the first time this season, Peter Houston’s young side showed their fighting qualities and held out for a point – and in doing so stretched to nine points their lead over fourth placed Hibernian.

United’s Swiss defender was ordered off after clashing with Kyle Lafferty. The Northern Irishman – no stranger to controversy – looked to have fouled his opponent, but the full-back reacted angrily and kicked out, leaving referee Brian Winter no option but to show him the red card.

But despite their numerical advantage, Walter Smith’s side couldn’t capitalise and United held on for a well-earned draw – meaning they are now ten games unbeaten.

Both teams had chances to win the match but neither could turn their chances into goals.

Rangers threatened early on through Steven Davis, but he curled a free-kick over the bar.

The home side’s first real effort on goal came from Garry Kenneth, who tested Alan McGregor in the Rangers goal with a long-range effort, but the keeper saved with his legs.

Danny Cadamarteri also came close when his shot hit the side netting.

Rangers’ best effort of the first half came through Kenny Miller, but his top-corner bound 25-yard volley was parried away by Dusan Pernis.

United looked more of a threat in the second half, with both Cadamarteri and Francisco Sandaza having opportunities to open the scoring, but neither could convert – with the Spanish striker missing the best chance when he headed wide from 12 yards.

With the Terrors on top, the momentum swung in Rangers’ favour when Kovacevic was sent off on 70 minutes.

The Ibrox side piled on the pressure and could have stolen all three points in the closing stages when substitutes Kris Boyd and Nacho Novo got in behind the United defence.

Boyd’s effort was brilliantly blocked by Pernis and Novo fired the loose ball into the net – but both were flagged offside.

Miller came close to winning it for Rangers when he went on a solo run and struck a left-footed shot across goal, but thankfully for the Tangerines, his effort rebounded off the post and United cleared to safety to secure a point – much to the delight of the Arabs.

Whilst we may not have hit any high spots on Sunday, reaching the Scottish Cup final was our only goal. By beating Raith Rovers we've given ourselves the chance to win a trophy and we'll do our damnedest to do that, though it will far from easy because Ross County were magnificent against Celtic. It will be very similar to the semi-final, in which we had to work really hard to overcome John McGlynn's side. Raith started the game tremendously and forced a few comers but, as we all know, goals change games and that was certainly the case on Sunday. Initially they were the dominant side, they were over-running us in the middle of the park but the first goal settled us and in the second half we did a lot better. We certainly weren't at our best- because I know we can play a lot better than that - but we've had a Lot of hard games recently and I am delighted to be in the final. I'm so pleased for the players - some of them may not see a Scottish Cup final again. And, of course, I'm delighted that we have given you, the fans, another Hampden appearance, because once again, you were different class on Sunday. Great credit to you, because you've travelled quite a distance to Glasgow and been disappointed at times in the past. We passed many buses on our way back to our base at Cumbemauld and it was nice to see the fans with smiles on their faces! The noise you made throughout the game helped us, especially in the first 25 minutes or so when we things weren't going our way, but as usual you got right behind the team. I only managed to speak briefly to Raith boss John McGlynn after the game as we were both tied up with the media, but he can look back on his side s run in the cup with pride as he has done a magnificent job and I felt his team played really well against us.

Now everyone connected with the club is looking forward to the final on May 15 against Ross County. Derek Adams and Craig Brewster have done a fantastic job up there. When we played them in the CIS Cup earlier in the season it was a very tough match, even though we won 2-0. They'll come into the final with nothing to lose and I can assure you we'll give them every respect. Between now and the final, I'll make sure we have somebody at all their games. But until then Hampden is on the back burner because, as the old cliche goes, with second spot in the league still feasible, we are Just taking one game at a time. Three wins in our last three games, including beating both Motherwell and Hibs, our rivals for a Europa League place, has given us a bit of a cushion and we now have a chance of catching Celtic. I don't want to heap pressure on the players, saying we'll catch them, but we're going to try to win every game. Whether we are good enough to do that, I don't know, but I can say that the guys in our squad are hungry. I said after beating Hibs that we were stilt looking behind us rather than in front of us. But after grinding out three points at St Johnstone, having the breathing space of eight points and 10 points ahead of t-fibs and Motherwell, we'll have a go at getting second place. We've certainly got a chance of catching' Celtic, because they've still to come to Tannadice. Although the players have tasted a bit of success now. we still haven't achieved anything - but there's so much to play for For tonight s game against Rangers, I'm contemplating a few changes, mainly because the heat and the size of the Hampden pitch took a lot out of the players. The same group have put so much into games recently and come out with good results and it might be time to see what others have to offer. They are champing at the bit and want to impress as we have a cup final to look forward to. Damian Casalinuovo has been injured recently, Fran Sandaza's grain is all right, but he's still working on his fitness levels, as is Danny Cadamarteri who has been out for the last few months. All three will come into contention tonight along with one or two others like Jeno Myrie-Williams, who has had to be patient because of the form of Danny Swanson and Craig Conway. So they might be given an opportunity against Rangers and it is up to them to take it. Unfortunately, the Loss of Paul Dixon, who broke a metatarsal on Sunday, is a major blow for us and for the tad himself. He's been so unlucky over the past few months with injuries and now he's going to miss a cup final. He has been in the international squad and is a top young defender, but we will just have to get on with it as there is nothing we can do about the situation now. We also picked up a couple of minor injuries at Hampden. Danny Swanson had a tight hamstring and Morgaro Gomis sustained a knock on his knee; however, neither of them is ruled out for this evening. On our day we can beat anybody at Tannadice, but there's no doubt that we face a difficult game against Rangers, especially as they are on the verge winning the title. But we're on a good run and we want to keep it going.