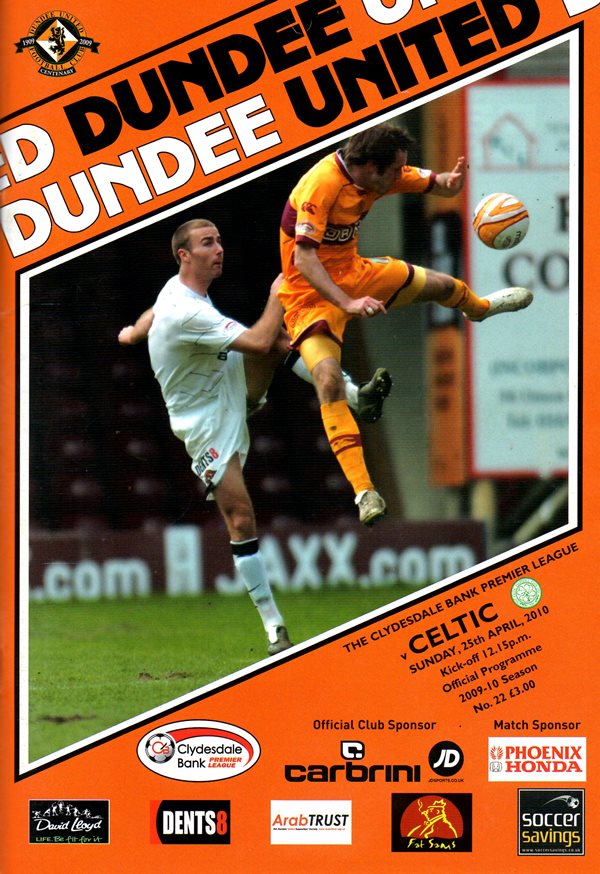 United slumped to their first defeat in 12 games as Celtic edged a hard fought and at times bad tempered match at Tannadice. Despite several close things for United they did all but score and when Jennison Myrie-Williams was sent off 13 minutes from time they were up against it for the second home game in succession.

Inside two minutes United almost surged ahead when Swanson set up Goodwillie on the bye line after easily beating a couple of Celtic players on the right side. The United striker got to the ball ahead of visiting goalkeeper Boruc and clipped a shot agonisingly across the face of the goal with his left foot with the ball appearing to shave the near post on the way. Swanson was again involved as United created the next big chance after 10 minutes, this time making space for Conway to drive into the box and cut the ball back and Goodwillie could have struck it first time but opted instead to cut inside for a clearer shot, with the ball running away from him before he could do so. Moments later another Conway delivery caused Celtic problems and this time Garry Kenneth was left all alone at the back post and his powerfully struck cross come shot was cleared desperately by Glenn Loovens with Daly waiting to slide the ball home. Unfortunately for the hosts Celtic took the lead against the run of play after half an hour played. The Glasgow side worked the ball out to Fortune on the right side and his reverse pass into the area found Diomansy Kamara who rifled the ball into the top corner with the centre of the terrors defence posted completely missing. United looked initially shocked by the loss of the opener however they did pick up late in the half and Celtic had to defend well as they forced a succession of free kicks and corners. Right on half time however Celtic somehow almost found themselves two in front as a McGeady cross was steered towards the far corner by Kamara but thankfully for the hosts the ball rolled past the post.

Robbie Keane, who had endured a fairly quiet afternoon, missed a decent chance shortly after the break when a Naylor free kick met him unmarked in the box but the Irishman probably tried to be too precise as he side footed the ball way over the bar. United then came within inches of getting the equaliser they deserved in the 50th minute when a Conway cut back was hit left footed by Goodwillie and the striker was very unlucky to see the shot bounce back off the inside of the post before the visiting defence cleared. With just over an hour played the home team were again fortunate to survive as Buaben gifted possession to McGeady at the edge of the box before the winger worked his way wide and crossed to Kamara who blasted over from six yards when it looked far easier to score. United threw on Sandaza and Myrie-Williams for Daly and Swanson as they tried to find something different as they struggled to make chances however the task was made a whole lot harder with 13 minutes left as sub Myrie-Williams was sent off for a second bookable offence. After an earlier foul on Brown had led to the first yellow a clumsy late challenge against N’Guemo saw the winger leave the field of play having had no time to make an impact. Pernis then had to make a decent save from Keane as he was teed up by Fortune before another flare up off the ball led to only Buaben being booked despite several players from both sides appeared to raise hands in the melee. As United pressed forward despite being a man light a counter attack from Celtic led to the soft award of a penalty as McGeady simply ran into Pernis who had come out to narrow the angle. Robbie Keane fired the spot kick into the roof of the net to give Celtic what was a slightly flattering 2-0 win. 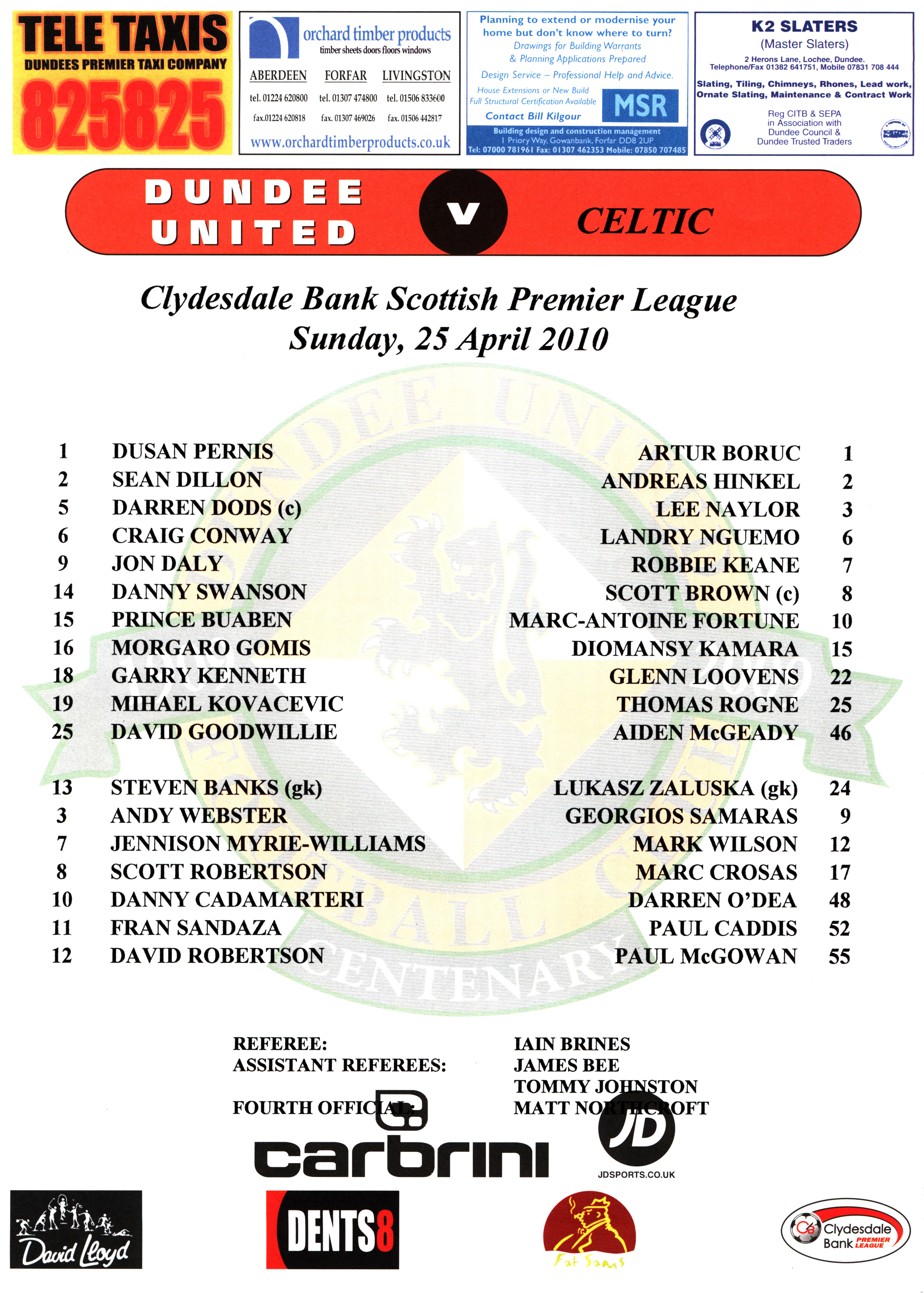 AlI along I have said that only when we achieved something tangible would I regard this as being a successful season. But that came to pass with last week's victory at Motherwell earning us entry to the Europa League. However, there is no way that I can claim alt the credit, because I have only been building on the very solid foundations laid by Craig Levein. Three-and-a-half years ago, Craig called me and asked me to come to United with him. Back then they were bottom of the league and the late Eddie Thompson was afraid they were about to get relegated. Qualifying for Europe is the result of a lot of hard work since then and no one should forget what Craig put in place so this could happen. Likewise, there's been a huge effort by the players, the coaching staff and everyone else connected with the club, so it has been a real team effort. This, however, is only the first step in a season in which there is so much left to play for. We've got a cup final to look forward to and winning that would be the real icing on the cake. We've also stilt to mathematically make sure of third, though I honestly can't see us being caught now. Beyond that, there is still a lot of progress this team can make and we'll keep working hard to achieve it. For our last home game against Rangers, they worked ever so hard. Having made six changes, I asked the guys who have been waiting for a chance to give us a shift. And they could be proud of themselves, leaving me a pleasant selection headache. But that has been typical of the boys because they give you everything every week. After all their efforts, it would have been thoroughly undeserved had we lost to Rangers. Not for a moment am I making out a case that we deserved to win, but I thought we fully merited a point. We followed that up with a terrific win at Motherwell last Sunday to put finishing within touching distance. That’s a huge achievement, but it's a big honour to take the team into Europe as well. Both teams take a lot of credit for managing to serve up a thriller, considering the condition of the Fir Park pitch.

Once again Jan Daly showed what an asset he is. He has been in superb scoring form and for him to score another couple of goals - was great for him and great for the side. Yet again, it was a real team effort. No matter how much the coaching staff and myself try and organise them and work on set-plays and tell them how to do this, that and the next thing - they've got to show a commitment, desire and attitude as well as play good football. That we have in abundance. And the dressing-room is a fantastic place to be just now with the confidence that accompanies a long unbeaten run. We're winning games and everyone is trying to stake a claim for a cup final place. But we've still four league games left and want to win as many of them as possible to finish as high as we can. And Celtic, this afternoon's opponents, are the side we have in our sights. Pulling back seven points is a big ask. In any event, we still need a point to ensure that we finish third, but irrespective of that, as usual we will be going all out to continue our excellent recent run which should make for terrific entertainment against a side that under Neil Lennon has won its last four SPL games.