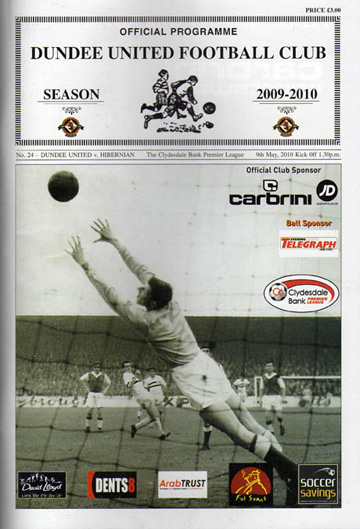 A less-then-full-strength United team lost their final league match of the season after going down 2-0 at home to Hibernian.

A goal in each half from Colin Nish sealed the win for Hibs, but the defeat had no effect on United’s final league position as Peter Houston’s team had already secured third place in the SPL table – their best finish since the 1996/97 season.

And with the Active Nation Scottish Cup final to look forward to, the manager had the luxury of resting a number of key players ahead of the Hampden showpiece, so it was an unfamiliar line-up that took to the field at Tannadice.

However, it took the home side a while to get going and John Hughes’s men took full advantage.

Hibs started strongly and could have taken the lead with just a minute on the clock when the United defence was caught out by a long ball forward, allowing Anthony Stokes through on goal.

But the former Arsenal striker shot tamely at Dusan Pernis.

However, the Hibees did take open the scoring in the 12th minute.

Stokes found space on the left crossed to the far corner of the penalty area. The ball was eventually laid off to Liam Miller, whose effort was turned in by Nish from close range to put Hibs 1-0 up.

United could have equalised five minutes later but were denied by a last-ditch clearance.

Danny Swanson’s corner to the back post was headed goal-wards by Kenneth, but the ball was cleared off the line as Hibs held on.

The Terrors came close again towards the end of the first half when Swanson’s quick free-kick was met by Damian Casalinuovo at the near post, but the Argentine striker’s his diving header went just wide.

The second half brought little in the way of chances for the Terrors side despite exerting some pressure on the Hibs defence.

The best chance, however, came just after the hour mark and fell to Andis Shala.

Good build up play on the right hand side between Scott Robertson and Keith Watson gave the full-back time and space to cross for the German, but his goal-bound header was saved easily by Hibs ‘keeper Graeme Smith.

And the home side were made to pay as the Hibees grabbed the all-important second goal to effectively kill the game.

David Wotherspoon played the ball back to Steven Thicot on the right and he curled the ball to the far post for Nish to head past Pernis and make it 2-0 to secure all three points for Hibs. 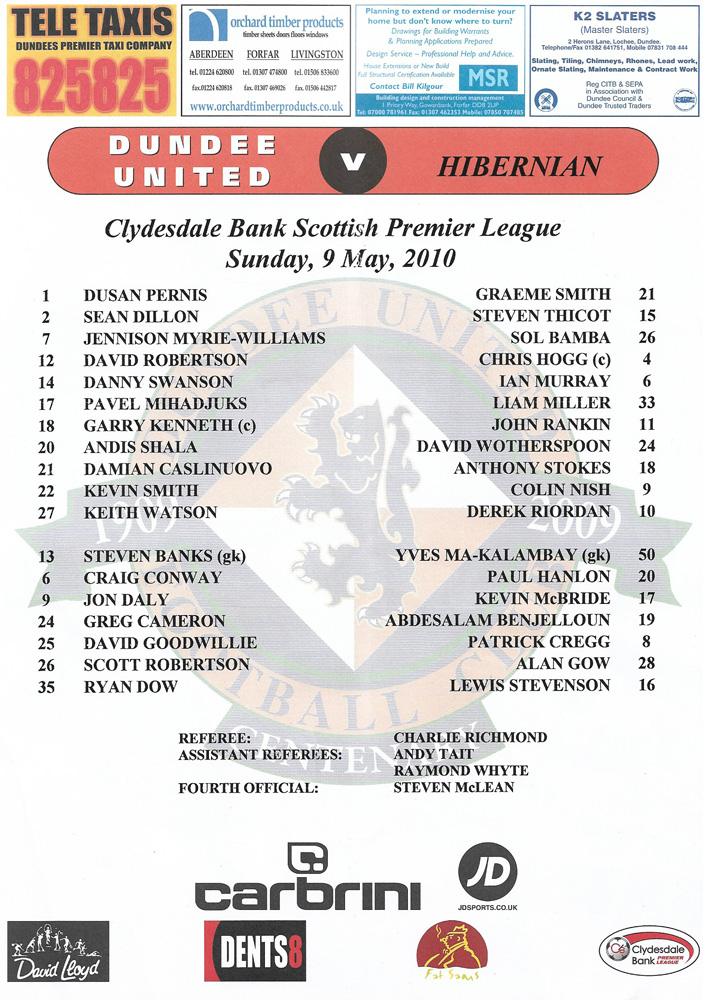 As we welcome Hibs to Tannadice this afternoon, we bring the curtain down on a memorable season, which of course, is far from over with next week's Scottish Cup Final to look forward to. Right from the offset when Craig and I came in, our aim was to improve season on season. And we have done that and after moderate improvement in the last couple of years, with the good squad at our disposal, we have done that with 63 points as opposed to 53 last term, taking us up from fifth to third. Indeed, the players have been fantastic alt season and showed how important it is to have strength in depth and the icing on the cake, of course, is having the opportunity of bringing the cup back to Tannadice. Of course, it is a team effort and I would like to give a big thank you to Paul Hegarty, Gary Kirk and every member of the backroom staff for their commitment to me and the devoted application to their jobs. And when handing out plaudits, I must include our fans for their important contribution. Ever since I joined the club, the support has been fantastic, but they have surpassed themselves this season. Whenever we have hit a rocky spell, they have got right behind the team. At no time have they got on the backs of the players and that has been much appreciated by everyone in the dressing room. And away from home even when outnumbered as they were in the cup run. For example, at St Johnstone, their backing was fantastic, and though hugely out-numbered at Ibrox, they out sang the home fans. Having guaranteed finishing the best of the rest behind the Old Firm with three games left, and having had some very tough games, with the cup final in mind, I didn't want the players' legs to go, hence the chopping and changing of the side over the last couple of games. Jon Daly and David Goodwillie have put in a hard shift, and having the likes of Danny Cadamarteri. Damian Casatinuovo and Andis Shala on the sidelines, it was the ideal opportunity to give them a run. It was also good to be able to blood the likes of Craig Hill and Ryan Dow against Rangers. Craig did well after, understandably. taking a wee white to settle and after coming on for the unfortunate Danny Cadamarteri, Ryan Dow surpassed everyone's expectations with an outstanding start. Though we lost 2-1, I was pleased with our second-half performance, but have to concede we probably didn't deserved anything out of the game.

Once again I rang the changes at Tynecastle in midweek as we got a hard earned draw with Hearts. First half, I thought we had the better chances and with a wee bit better quality when going forward in the second half might have won us the match. Although Andy Webster came off at halftime I have to stress that it was my decision. He is alt right and it was purely precautionary. In fact, Webby wanted to go back out, but I decided against it. He has had a problem with nerves going down from his back into his calf so we played safe. Hibs, fresh from that extraordinary 6-6 draw with Motherwell in midweek, are our guests for the final league match. Hopefully, however, everyone will be back at Tannadice next Sunday celebrating having won the Scottish Cup, because in my book, that would be a fitting reward to our supporters for their tremendous backing throughout the campaign.