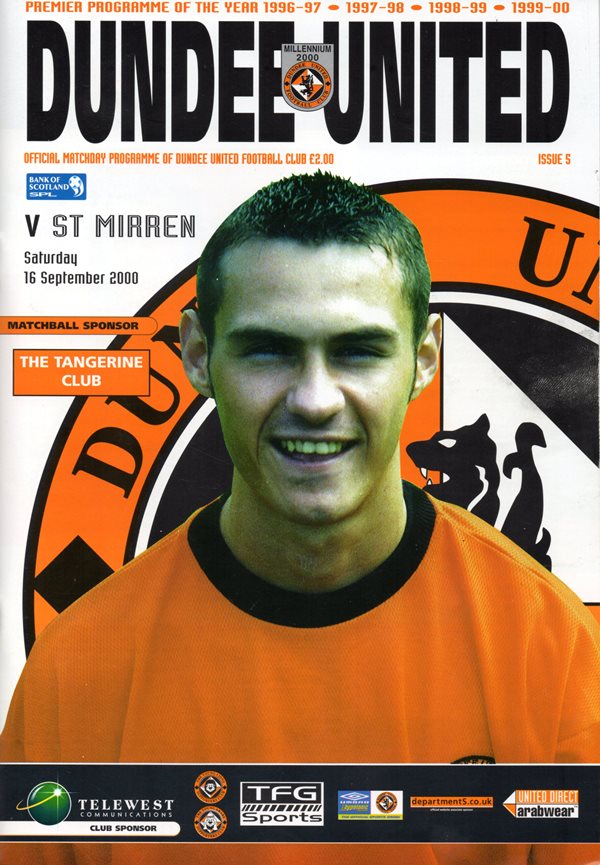 Stephane Leoni and Mvondo Atangana made their home debuts as United looked to turn their woeful start around against St Mirren at Tannadice. Partnering Atangana up front was Alphonse Tchami ensuring an all Cameroon strike force was on show.

In the early stages both strikers threatened before Jens Paeslack shot wide from just 5 yards following a fine Jamie McGowan cross. St Mirren were starting to look the likelier to score as they began well however Steven Thompson’s deep cross in 17 minutes was only narrowly missed by the in-rushing David Hannah. There were loud appeals for a United penalty when Tchami went down in the box in 25 minutes after a heavy challenge from Scott Walker but the referee waved play on. Atangana almost found Joachim Fernandez with a great through ball in 28 minutes but the delivery was cleared. There was a major blow for the hosts as Stephen Wright was then red carded after half an hour for pulling back Paeslack when he was clean through on goal. Hasney Aljofree then went down in the area however referee Clark again waved play on. Before half time McGowan for the visitors and Jason De Vos both had headers but neither could find the net ending a fiery opening 45 goalless.

Jamie Buchan won the ball and ran towards goal but his fine shot flew just wide shortly after the break. In 63 minutes Stephen Thompson cut back for Fernandez but he instead shot over from a good position. Jose Quitongo had the ball in the United net in 64 minutes but thankfully for the hosts the effort was ruled offside. The visitors looked to attack on the break late on and only a last ditch tackle from Aljofree prevented Mark Yardley from scoring with 10 minutes to go. Despite late attempts from Fernandez and De Vos it wasn't to be the day for goals as the game ended in stalemate. 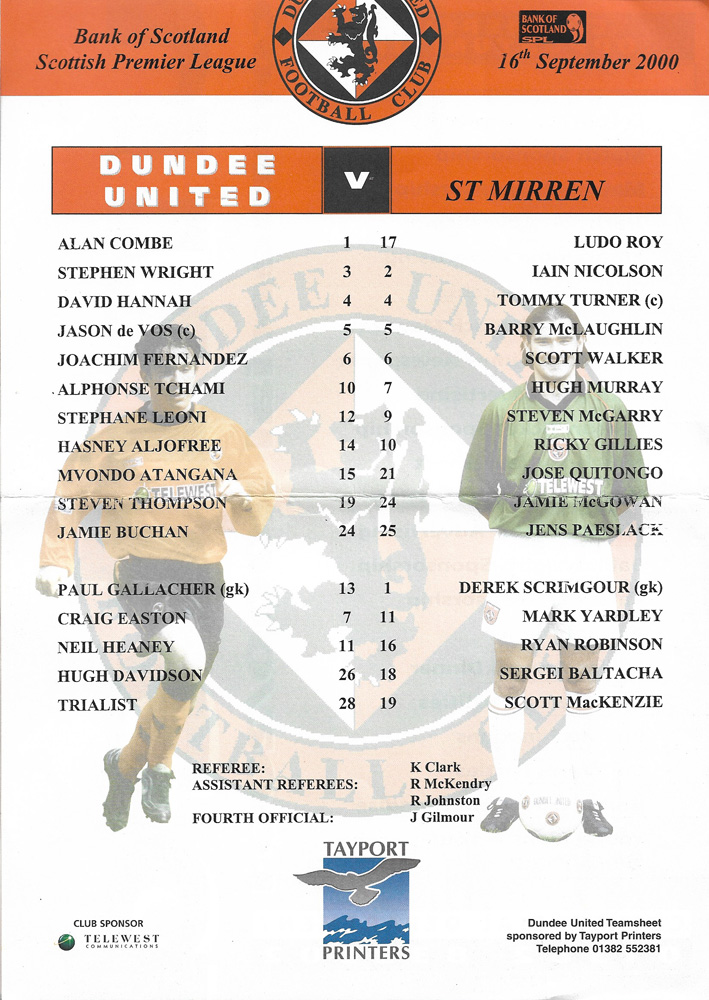 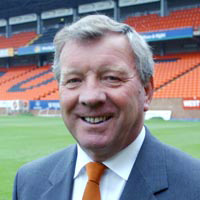 Six weeks into the season and we find ourselves still striving for that elusive win in the SPL,although we have,at least,made further progress in the CIS Insurance Cup.Only with great difficulty did we overcome Airdrie in the last round,their visit producing a typical cup tie where the team from the lower league raised their game with their players performing at their peak.And because we failed to get an early goal to take the steam out of the situation,it enabled the visitors to counter-attack and catch us on the break making life very difficult for us.When it came to the crunch of a penalty shoot-out,we survived,but only just,because at one stage of that sudden death,we appeared to be heading out of the competition.Our reward is a quarter-final meeting with Rangers at Ibrox in six weeks time,but for the moment that is very much on the back burner as we endeavour to start collecting badly needed league points.Unfortunately,we were unsuccessful in that direction last week at Rugby Park and the 1-0 defeat was a disappointing one for everyone connected with the club.On the plus side,we did create more chances than we have been doing a we really ought to have taken at least one of them before the interval.By contrast, Kilmarnock had a solitary shot at goal and that was from free-kick before we made the mistake which brought them what ultimately turned out to be the winner.That brought home just how important it is that we do take any chances which come our way and get our noses in front for a change and give the
defence some respite,because all too often they are hanging on by their shirt tails without a lead to defend.Although we played slightly better against Kilmarnock,we are not kidding ourselves that there still isn't a lot of room for improvement.I have no doubt,however,that if we can get that one win under our belt,it would do wonders for our confidence and shake off the negativity in our play and enable us to play with greater fluency.However, only by working that bit harder can we bring this about.At the back we must defend better in the right areas and in the offensive areas,there is no doubt that a bit more adventure in our play wouldn't
go amiss allied with more accurate passing and greater composure in front of goal.Not that we couldn't take something out of last week's match.Stephen Wright maintained the consistency he has shown in every game he has played since his arrival,whether he has played at right-back or as he has done in central defence in the last two games.Newcomer Stephane Leoni,once he adapted to the pace,improved as the game progressed and did well in his first appearance.Like Leoni,Joachim Fernandez is also still acclimatising to the very different game in Scotland.On the evidence of last week,
though,I am sure that once he is fully attuned to the pace and the mentality required here, he could well be the answer to our lack of creativity in midfield. He has good passing ability as well as vision commodities which we are crying out for,and it is important that we build up his confidence to help him settle in.During the half hour or so that Mvondo Atangana played after coming on as a substitute at Rugby Park,he demonstrated that he has the pace to be a big asset. In addition,the way in which he took his two goals in Monday's Under 21 match proved that he also has the composure we are seeking.St Mirren,whom we meet this afternoon,are one of my former clubs.My days at Love Street were most enjoyable,but in welcoming then to Tannadice,our position is such that I have to be selfish in hoping that we can acquire all three points.One thing I do know is that St Mirren,under their young and enthusiastic management team,will make us work very hard for anything we take out of the game,but we simply must start winning matches and quickly, especially as a victory this afternoon would lift us off the bottom.