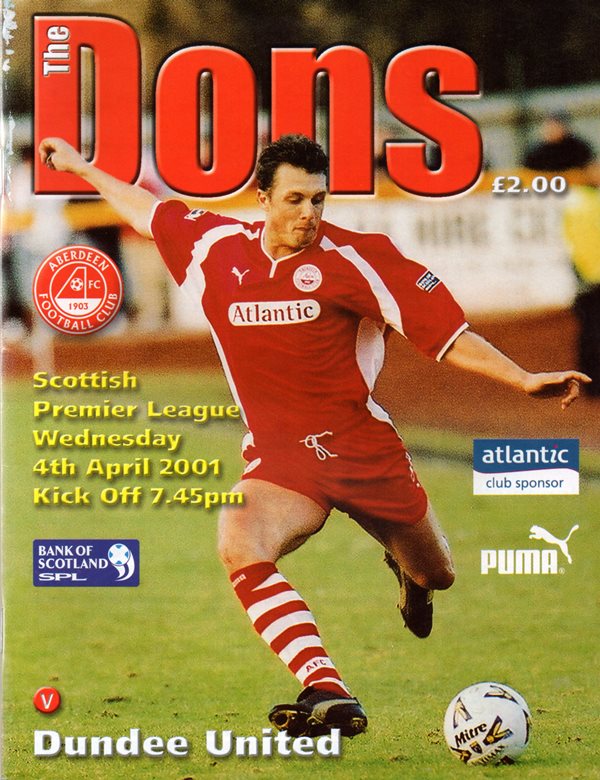 With both United and Aberdeen showing much improved form recently, this rearranged match was eagerly anticipated by both sets of supporters. After the outstanding 2-0 win over Rangers at Ibrox, there was huge expectation in theTannadice ranks going into the game. Aberdeen were also confident of getting a result after pushing champions elect Celtic hard three days earlier. As expected, Alex Smith kept faith with the eleven players who had finished the game at Ibrox, with Stephen Thompson starting up front In place of the injured Jim Hamilton. Returning from suspension, midfielder David Hannah had to settle for a place on the subs bench as the manager opted for 4-3-3 formation with the onus on attack.

If United boss Atex Smith had wished for a good start, he got exactly the opposite with Aberdeen taking the lead in the 2nd minute. A cross field pass from McAllister soared over the head of de Vos into the path of Arild Stavrum. The Norwegian striker controlled the ball under pressure before firing a right foot shot past Gallacher into the top left hand comer. This goal rattled United who then had to defend well against a few home attacks as Aberdeen, clearly fired up, applied much pressure. However in 13 minutes the Tangerines drew level in superb style. Miller embarked on a run towards the Aberdeen box before being fouled by Rowson, just outside the area. Up stepped Danny Griffin to curl a wonderful free kick right footed over the wall and into the net, leaving Esson with no chance.The Irish International could not possibly have opened his Tannadice scoring account in more spectacular fashion. Any advantage and contidence boost the tangerines gained from the equaliser was taken away from them again a few minutes later. Lauchlan was penalised rather unfortunately on the left for a 50-50 challenge with Derek Young and when Winters flighted the ball over, Arild Stavrum stooped low to head the ball into the bottom comer of the net. It went from bad to worse for United minutes from the interval when Aberieen scored a third. Gallacher saved a Stavrum shot but, after a goalmouth scramble, Derek Young bundled the ball over the line from two yards, despite the attentions of Buchan.

Whatever Alex Smith said to his playere at half time certainly worked wonders with United having almost total domination during the second hall. Midflelder Hannah came on to replace Robinson as United went back to their familiar 4-4-2 formation. The move led to Aberdeen being pinned back in their own penalty box. It was wave after wave of green attacks with Miller at the heart at every excellent attack. The former Watford man came within inches of pulling a deserved goal back far United when he collected a Lilley cut back inside the box before firing a thunderous strike against the crossbar. Unfortunately for United, it bounced down on the wrong side of the goal line and was cleared to safety by Whyte. With United throwing men forward and even De Vos up in attack it was perhaps inevitable that they would be vulnerable to the counter attack which is exactly what happened with two minutes of normal time left. A quick attack on the break involving Solberg, Mackie and Rowson ended with Arild Stavrum beating Gallacher from ten yards to complete his hat-trick and effectively kill the game. It is ironic to think that United probably played better in the game, particularly the second half, than they did the victory at Ibrox. Their domination during the second 45 minutes was such that the home fans actually were heard to boo their own team who were 3-1 up, simply because they couldn't get out of their own half. For United it was, perhaps, a reminder that there remained plenty of work to be done before they could be safe from the threat of relegation.