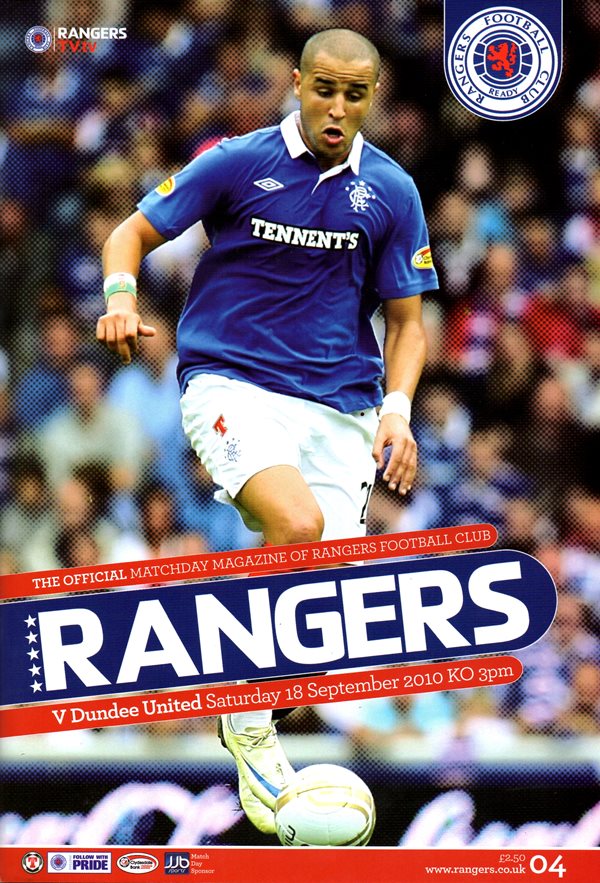 United returned to Ibrox on SPL duty for the first time since their 7 v 1 thrashing last December – but with hopes high that the game would more closely resemble their battling 3 v 3 draw in the Scottish Cup from March. However, that task was made harder by the absences of Conway and Swanson through injury which meant Barry Douglas operated wide on the left of midfield, Paul Dixon returning at left back. Scott Robertson also returned to the side in place of his namesake David. The injury problems would continue to mount during the game with Douglas, Gary Kenneth and eventually David Goodwillie all forced off. Rangers freshened things up after their midweek trip to Old Trafford with Jelavic in to partner Miller, and Weiss supporting from wide left.

Weiss proved a handful for United at times and both Robertson and Daly picked up yellow cards for late tackles on the Slovak. As early as the second minute the winger went close, shooting narrowly wide from twenty yards after cutting inside Dillon from the wing. By then United had already threatened through Barry Douglas who worked a neat one-two with David Goodwillie before testing McGregor with a powerful drive from 20 yards. But though there was plenty of good passing from both sides, clear cut chances were scarce in an evenly contested first half with Severin and Kenneth forming a solid partnership, and Bougerra impressive for the hosts. Only a 9th minute own goal could separate the sides by the interval. Dixon conceded possession allowing Davis to break free on the right. He looked to pick out Jelavic with a low cut-back but it was Sean Dillon, rushing back in an attempt to clear who diverted the ball beyond his own keeper. United continued to enjoy plenty of neat possession, though seemed to lack the necessary speed or guile to create clear cut chances from it. One swift move almost brought about an equaliser, however. A fine counter attack started with Goodwillie in his own penalty box who fed Buaben. The Ghanaian’s early pass released Gomis into the Rangers box, but though the Frenchman rounded Whittaker his touch took him too close to McGregor and the keeper gathered. Moments later Daly was released into the left channel, but Bougerra’s speed allowed him to make up ground and the chance was lost. Weiss continued to cause trouble for United. Once again cutting in from the left he teed up Davis for a 20 yard drive that was comfortably saved by Pernis. The winger then dribbled clear of two United defenders, worked a one-two with Miller before driving a low shot across goal that strayed just wide of the far post. United responded and Goodwillie was almost able to set up Daly with a dangerous cross from the right, but Bougerra at full stretch was just able to flick the ball behind for a corner. Moments later and Daly’s header back across goal was prodded just wide by Gomis under pressure from Weir, then Daly himself glanced a header wide from a Douglas corner. With the interval approaching Daly sent another header wide from six yards after Edu recklessly scooped the ball high into his own penalty area.

Though behind at the interval, that score line was hard on the visitors and there were plenty of reasons for the travelling Arabs to believe their side would still get something from the game. However, half-time saw the first of three enforced changes. Garry Kenneth failed to reappear after taking a head-knock just before the break and so Sean Dillon moved to centre half with Keith Watson coming on at right back. But it was Rangers who stepped up a gear after the interval. Jelavic had two clear chances in the first three minutes – a drive from sixteen yards well blocked by Pernis, then a header wide from 8 yards after Whittaker had picked him out unmarked with a cross. United suffered yet another blow on 54 minutes as Barry Douglas limped off to be replaced at left midfield by Johnny Russell. The visitors steadied the ship and their best chance arrived on 58 minutes. Gomis stole possession setting up a three on three. He opted to release Daly on the right. The big striker’s low cut-back was collected by Goodwillie but though he got a shot away under pressure it lacked power and McGregor saved comfortably. From then on, the goal mouth action was all at the other end with United suddenly looking vulnerable. A clever pass inside Dixon by Kenny Miller presented Whittaker with a great opportunity but the full-back shot too close to Pernis who blocked. Next the keeper did well to parry away a powerful McCulloch drive from 30 yards and then was alert to get a hand to a Weiss chip across goal. But Pernis was helpless to prevent Rangers scoring again on 70 minutes. Jelavic was judged to have beaten the offside trap and his low cross from the right got beyond Dillon leaving Kenny Miller all the time in the world to finish. Seven minutes later and substitute Steven Naismith headed number three from David Weir’s cross after United failed to clear a corner. Another fine diving save from Pernis denied Davis but goal number four was only delayed momentarily. With eight minutes remaining, Kenny Miller again side-footed home a Jelavic cross from the right to score his second and Ranger’s fourth. A promising first hour from the visitors had failed to deliver a goal; while the last half hour witnessed a very disappointing collapse.