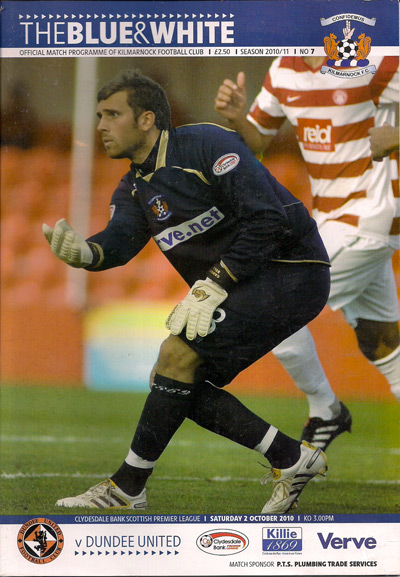 As United searched for their first away win of the season, manager Peter Houston stuck by the same eleven and 5-3-2 system that secured three points against St Johnstone seven days earlier. That included defender Garry Kenneth who sported a massive bandage to protect the head gash which saw him stretchered off against Saints. Former Tannadice favourite Mixu Paatelainen made two changes from his Killie side that salvaged a point at Hamilton in their last outing, Gary Hay taking over from Ben Gordon and Danny Invincible replacing Harry Forrester.

On a grey afternoon in Ayrshire, United kicked off, winning a corner right away. From Paul Dixon’s kick, Scott Severin headed straight into the arms of Killie keeper Cameron Bell. Killie’s first excursions upfield sounded warning bells, first a Hay cross saw Dusan Pernis and Scott Severin get in a tangle with the ball running loose, before Pernis pounced to avert danger. Then a minute later, Da Silva skipped past Kenneth, but Severin blocked his shot. After six minutes of this all-action start, Prince Buaben fired in a free-kick from fully 30 yards that Bell could only palm up in the air before catching it. Two minutes later, as the ball bounced around the United box, Mohamadou Sissoko got on the end of it and his shot on the turn from six yards was deflected off the outstretched arm of Darren Dods and up and on to the roof of the net. Home protestations for a penalty fell on stony ground. But on fifteen minutes, the deadlock was broken, but at the other end. Sean Dillon, on the half way line drilled the ball out wide left to Dixon who was coming back after taking a corner. The full-back cut inside and as he was tackled the ball broke to David Goodwillie who turned and fired in a shot from eight yards that deflected off his standing leg and spun up and over a stranded Bell and in at the far post. Midway through the half, Goodwillie again demonstrated his threat, combining with Buaben on the left to work his way along the touchline before being crowded out. Killie replied with a series of balls into the box, but the United defence held firm as this enthralling contest ebbed and flowed. But increasingly, it was flowing towards Pernis and twice Conor Sammon found space in the box to get in efforts on goal. After 25 minutes, he was played in, but his shot on the turn was comfortably saved by Pernis. Then two minutes later, the Dublin born striker passed up an even better chance. After playing a one-two with Craig Bryson, and from a slightly less acute angle, he fired past the far post. The action, hardly surprisingly slackened a little, with United soaking up the pressure which the home side’s greater share of possession gave them. However, it wasn’t until five minutes from the break that Pernis was troubled again, being forced to punch away a blistering Da Silva shot. Before the break Sammon fired over and United survived a penalty claim as Hamill’s cross from the right came off Dixon’s arm. And as a swashbuckling half-half came to a close, enough time was left to produce two yellow cards for two United players in the last minute. Goodwillie was booked, seemingly on the say so of Killie defender Manuel Pascali whose protestations to the stand-side assistant referee over an altercation with the United striker saw the referee involved and a card produced. The second, moments later was much more straightforward, Kenneth bringing down Craig Bryson in unceremonious fashion.

Darren Dods failed to re-appear at the start of the second period, having sustained a heavy knock for which he required treatment shortly before the break. Scott Robertson replaced him as United reverted to 4-4-2. And the substitute was soon in the thick of the action, delivering an inviting cross to namesake David who just failed to make contact with his head bang in front of goal. Although Killie forced two corners, both of which came to nothing, United were successfully taking the sting out of the game, but still threatening at the other end. Only Frazer Wright’s late tackle prevented Goodwillie going through on the keeper after being sent clear by Jon Daly ten minutes after the restart. Two minutes later, Da Silva blazed over from 12 yards after being set up by Sammon for what was one of the Rugby Parkers’ best chances of the game. Mixu Paatelainen’s charges raised their game, bombarding the United goal with a series of high balls and twice Scott Robertson came to the rescue to clear the lines. United were now living dangerously and after 65 minutes Bryson squandered a gilt chance. Jamie Hamill cut the ball back to Bryson who bundled the ball past from the around the penalty spot. And Killie paid a heavy price for that miss, losing a second goal just over twenty minutes from the end. Two minutes earlier, Daly had a glancing header from a Dixon free-kick from the right, but they failed to heed that warning and when Dixon was fouled down the left flank, his free-kick was met by Severin at the back post and Jon Daly bundled the ball over the line. That was Dixon’s last contribution as a minute later, he was replaced by Keith Watson who went on at right-back with Sean Dillon switching to the left. Although Sammon was doing his best to set up his colleagues, his work went un-rewarded with substitute Rui Miguel the latest to waste a chance, firing into row Z. On the other hand, the ever-dangerous Goodwillie showed the home forwards the way, forcing Bell to save at full stretch with a low drive a minute later. Any hopes Killie had of salvaging anything went by the board eight minutes from the end when home defender Frazer Wright saw red for dissent, having been booked earlier for a foul on Buaben. There was a blow for United three minutes from the end when Buaben went down and limped off with Danny Cadamarteri coming on for the last few minutes. Although the points were in the bag with what was almost the last kick of the game, Killie scored a consolation goal. Substitute Miquel delivered a cross from the left to the far post where Da Sliva nodded it down for the hard-working Conor Sammon got on the scoresheet, though it transpires that Severin actually got the final touch!