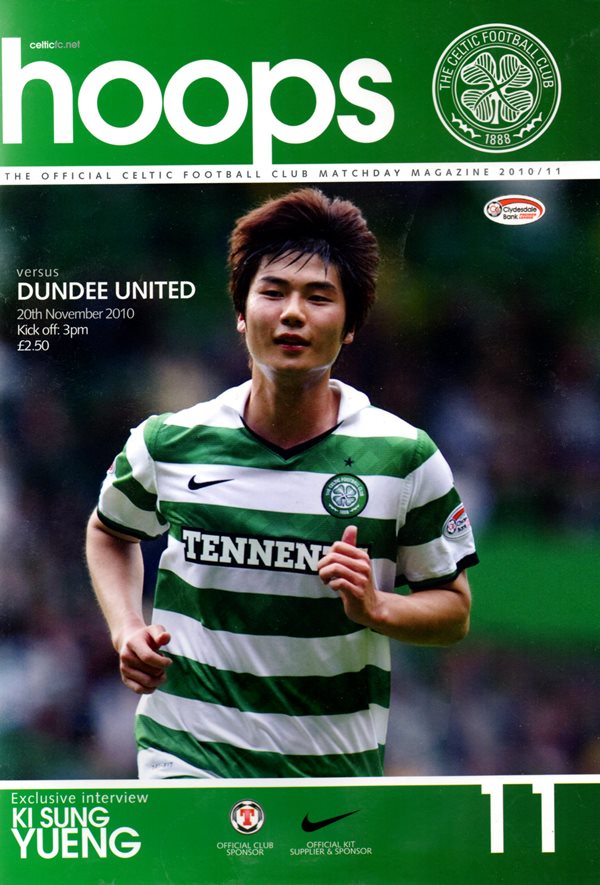 United went into this match looking to record their first win at Parkhead since Boxing Day 1992. Scott Robertson had recovered from the thigh strain which had forced him off against Kilmarnock and as a result Peter Houston was able to name an unchanged eleven. Indeed, the only alteration to the squad was Andis Shala replacing Ryan Dow on the bench. Having said that there was a change in formation with Johnny Russell moving to wide right in a 4-5-1 line-up with David Goodwillie on his own up front. Celtic made three changes from the side that earned three points thanks to a last minute winner at Paisley the previous Sunday. Cha du Ri and Daryl Murphy came in for the injured Mark Wilson and Anthony Stokes, while Joe Ledley, free from suspension, was restored to the side at the expense of Efran Jaurez.

After a quiet start the game burst into life with both sides going close inside five minutes. First to threaten were Celtic when Keith Watson was forced into conceding a corner to avert the danger from a searching through ball. From it, the ball fell to Murphy at the far post, but his header from a very acute angle hit the outside of the post. And with United unable to clear their lines, Shaun Maloney set up Ledley, but Watson blocked his shot for a corner. However, from it, United broke quickly and should undoubtedly have scored. Johnny Russell wide right spotted Goodwillie ahead of the Celtic back lot, but in his own half and intelligently played him in. Running half the length of the park, Goodie looked certain to score when he pushed the ball past the advancing Fraser Forster, only for the ball to run the wrong side of the post! United’s pace was causing the home defence problems. Just before the quarter of an hour mark, Goodie made a surging run in from the right touchline and was only crowded a few yards from goal. Then the striker who won his first Scotland cap in midweek was though on goal, but this time was offside. But all that good work counted for nothing midway through the half as Celtic took the lead with their first real attack since that early burst. Having failed to clear Shaun Maloney found space on the left and burst to the by-line before cutting the ball back to Gary Hooper who wheeled to fire a right foot shot high into the net from eight yards. With 28 minutes gone, Hooper looked certain to double the Hoops’ lead. Maloney played Emilio Izaguirre in on the left, but Dusan Pernis somehow managed to keep out Hooper’s side-footed close-range effort and the ball was scrambled to safety. Ten minutes from the break, Niall McGinn swept a cross from Cha Du Ri goalwards, but it was easy meat for Pernis. And in the lead up to the interval, Celtic looked increasingly dangerous. Hooper almost capitalised on a stray Scott Robertson pass to run though on goal, but Pernis parried it and though Murphy latched on to the rebound, he was crowded out. And a minute later, Ledley was left with a clear sight of goal, only to blaze over from 12 yards. Next to have a go was McGinn, cutting in from the right to send a raking shot narrowly over, though Pernis looked as though he may well have tipped it over, but referee Mike Tulmity was well placed to rule it was a goal-kick. Hooper again tested Pernis who blocked it and again the United defence had to scramble the ball clear.

Celtic continued in the ascendency at the start of the second half, but without the same intensity, McGinn firing over after 47 minutes the only effort at goal of the opening five minutes. Gradually the visitors started to make the running. Indeed, a deftly-flighted clearance by Garry Kenneth set David Goodwillie clear on the left, but the Celtic defence got back in numbers to block his path, though at the expense of United’s first corner of the game. Shortly afterwards Goodie went down in the box, though he clearly slipped as he ran on to a Barry Douglas header. These were encouraging signs for the small band of Arabs tucked away up in the corner of the stand and United quickly won a second corner which ended with Garry Kenneth sending a glancing header wide after 57 minutes. But six minutes later, only a terrific one-handed save by Pernis kept out a Hooper pile-driver after McGinn had played him in. But that was the exception as United pushed forward more and more! With 66 minutes gone, Houstie made the first substitution of the afternoon, Jon Daly replacing Johnny Russell. That was quickly followed by Danny Swanson coming on for Scott Robertson as United looked to get back in the game. And with 19 minutes left, Kenneth played a long ball out of defence which Goodie chased and was sent crashing to the ground by Swedish defender Daniel Majstorovic. The offence was outside the box, but after the referee waved play on and was immediately surrounded by a posse of Tangerines claiming a foul with the Celtic defender the last man, All the protests earned was yellow cards for Swanson and Kenneth. Celtic introduced Georgis Samaras for McGinn, but it was United who still threatened with a series of dangerous crosses. But Celtic passed up a gilt-edged opportunity to wrap it all up with seven minutes left. Breaking quickly from a spell of United pressure, Ledley played a one-two with Ki and the former stroked the ball towards goal only for Prince Buaben to pop up and clear the ball off the line. Right to the end, United forced the issue, Morgaro Gomis firing in a shot from 20 yards, but Foster dropped on it to save comfortably. But just when time looked to have run out – in the third minute of stoppage time – Barry Douglas delivered a free-kick after he had been fouled by Maloney and Seán Dillon met it to head home a deserved leveller to the delight of the United players, coaching team and fans who celebrated wildly in the stand. Celtic barely had time to restart before the referee blew the final whistle: a memorable comeback from United.