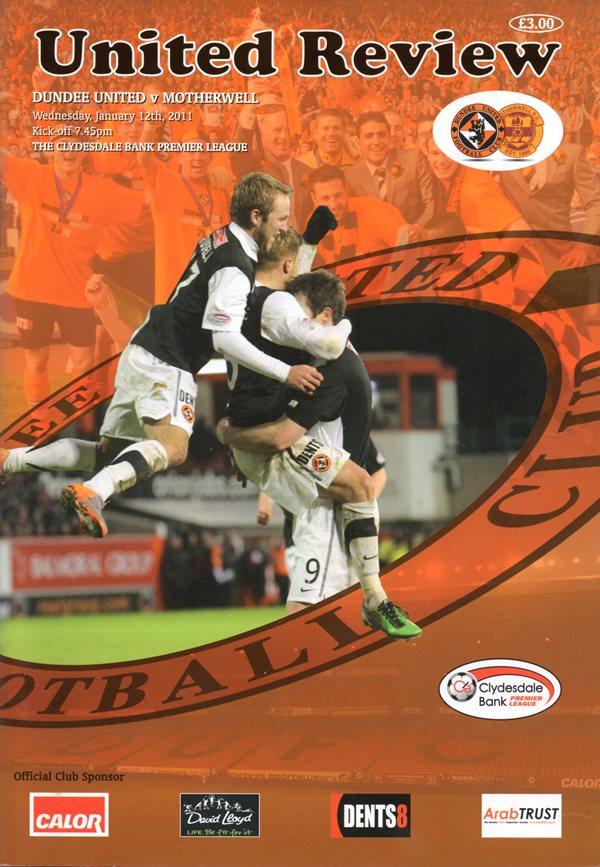 After a frustrating draw against Ross County in the cup on Saturday Peter Houston made two changes to the starting line up which face Motherwell in a rearranged fixture. David Robertson replaced his namesake Scott in central midfield while David Goodwillie returned from a suspension to take his place again up front. The other absentee was Barry Douglas who failed to make the squad following a head knock during the weekend game so Johnny Russell was played out wide as United began with what looked an attacking formation. After hardly featuring all season through injury there was a boost for the Terrors as Craig Conway returned to take a place on the bench. Following the recent adverse weather this was the first league game at Tannadice since the 1-1 draw with Kilmarnock on the 13th of November with the hosts looking to continue a run of 5 games without defeat.

United made a confident start, knocking the ball around nicely on the slick surface, and their play almost produced a fine goal after 3 minutes. A nice flick from Goodwillie found Buaben in space and he fed in Russell on the left edge of the area with the youngster so unlucky to see a left foot in swinging shot spin back off the base of the post with visiting goalkeeper Darren Randolph completely beaten. In 8 minutes Keith Watson swung in a great cross from the right which gave Gomis the chance to volley towards goal from inside the box but he could only shoot the ball well wide as United continued their good start then Buaben produced a fine save from Randolph after being set up for a stinging right foot drive by Russell who was alert enough to see his team mate in more space. Jon Daly then headed a hanging ball from Watson wide of target before slipping in Goodwillie with a clever pass beyond the defence, but from an acute angle the tangerines top scorer could only shoot into the arms of the Motherwell keeper after he had forced the United man wide. The visitors had barely threatened by the time John Sutton shot high over the bar from a decent position in the 20th minute before the normal pressure on Randolph’s goal was continued when the lively Gomis struck a decent shot form 20 yards which the goalkeeper did well to hold. As the half hour approached there was moment of worry for the home side as Jamie Murphy drifted into the box but luckily for Pernis his shot was easily gathered. Morgaro Gomis was managing to get into several shooting positions and again he stung the palms of Randolph from long range as he sent an effort towards the top corner. The visitors were awarded a soft free kick on the right in 33 minutes and Ross Forbes sent in a dangerous cross which was headed against the post, however an offside flag had already been raised. Forbes next delivery was not so strong as he hoisted a long range free kick over Pernis goal before there was a mild penalty claim for United as Watson tried to play in Goodwillie inside the area, but to be fair there was little question of intent as the ball bounced up onto the arm of a Motherwell defender. Very close to half time Randolph fumbled a deep Watson cross and the ball very nearly fell to Daly 8 yards out but the ball was cleared just before he could pull the trigger.

Within minutes United were attacking again and a Russell cross from the left was parried out by Randolph to Buaben who smashed a drive towards goal which was blocked by a desperate defence, before Dixon appeared to be upended in the box by Humphries after the left back had done well to steal back possession. Ian Brines had a close view of the incident and with many United fans waiting to see a penalty awarded he instead showed Dixon the yellow card after interpreting that the United man had dived. There wasn’t long for the hosts to dwell on this however as they took a richly deserved lead after 52 minutes. Dixon swung in a corner from the left which Garry Kenneth won easily in the air and he headed across the 6 yard box for Johnny Russell who calmly placed a header in the top corner whilst under pressure from the defence. With just over an hour gone Goodwillie worked space for a shot and struck a dipping effort from long range which Randolph gathered at the second attempt under severe pressure from Daly who had closed him down. Motherwell did push forward more as they fought to get back in the game although the United defence dealt well with their efforts and made it difficult for the visitors to create anything. United were definitely not playing to hold onto their lead however and this was highlighted when Goodwillie again worked the ball inside before striking from 25 yards out, with Randolph saving well down to his right. United had looked incredibly comfortable on their lead as the game reached the latter stages but had to call upon Pernis after 84 minutes to stop Motherwell equalising. Jamie Murphy crossed deep from the left wing and Chris Humphries nodded the ball downwards only for Pernis to save brilliantly before Kenneth hooked the ball clear. Thankfully for United and to the joy of the home fans the game was wrapped up in the 89th minute when on the counter attack substitute Staurt Armstrong unselfishly played in David Goodwillie after darting into the area and the Tannadice hit man drew out the goalkeeper before calmly slotting into the bottom corner to complete a hugely satisfying 90 minutes. 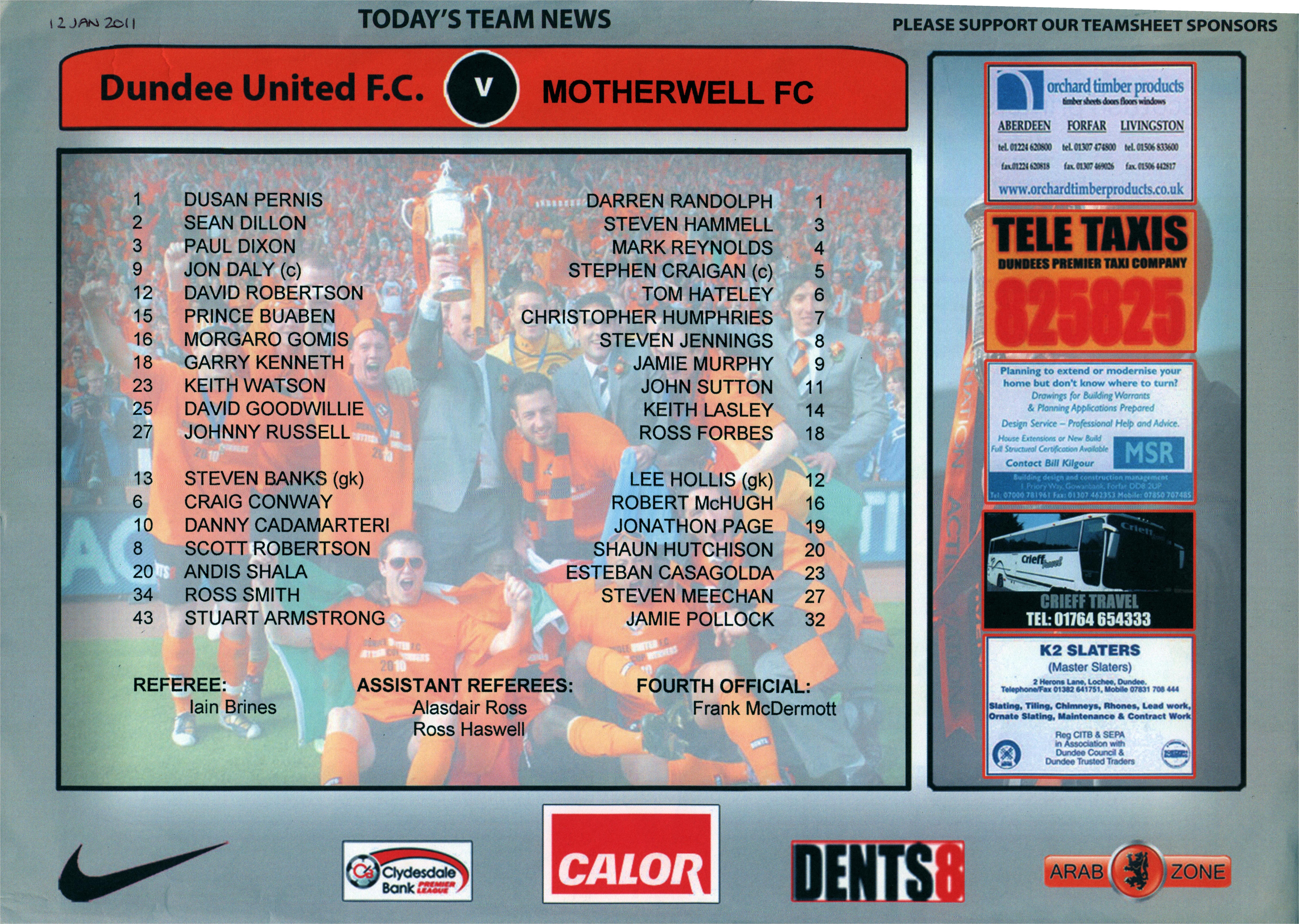 And I'd readily concede that we didn't get off to the best of starts. Saturday's game with Ross County was a poor one. There weren't a great deal of chances, but not for a minute do I think we are lucky to still be in the cup. Ross County defended very well and tried to hit us on the counter-attack, which we expected. What was so disappointing was that we had anticipated this and failed to overcome them. When it gets to the final third, I expect better from my players whose delivery wasn't great. Defensively, we were too deep and should have played a higher line and won more headers. In addition, the midfield gave the ball away cheaply and the two strikers weren't particularly great either. I know the fans were upset when Johnny Russell came ofF, but he was nowhere near the standards he is capable of. But Cads sparked things up a wee bit and I thought we had the better chances. Having said that I can't deny Ross County probably deserved another chance.

But that replay is very much on the back burner as we return to league action with two home fixtures inside three days. first against Motherwell has left me with major selection problems. On top of the on-going long-term absentees, skipper Jon Daly and midfielder Barry Douglas are both struggling with injuries they sustained in the weekend draw with Ross County. Jon has a groin strain, while Barry suffered a head knock and is struggling to be ready for tonight. In addition, defender Sean Dillon's wife, Michelle, is due to have their first child any day now, so there is to be a chance he'll miss out. The situation with Sean is something we'll monitor and it's one of those things that happen and you are happy to deal with because it's a nice event. I have to say you'd never know the baby was due because as he always does, Sean's just been getting on with his work quietly. Obviously, though, if the baby comes close to the game he'll have to miss out. Hopefully, it won't be today because we're down to the bare bones. Indeed, with Jon and Barry struggling, and Danny Swanson again ruled out with a back problem, we're beyond that, but there is no point moaning and we'll just have to get on with it. It isn't all bad news because we have Goodie back in the squad after his Scottish Cup suspension and Craig Conway has been added to the squad for the first time since undergoing knee surgery just over two months ago. But I must stress at best he'll make the bench. You're taking 15 to 20 minutes at most for him. In fact, it isn't absolutely certain he'll even get a Jersey even although he'll give us some badly needed width. What I want to avoid is giving into the temptation to throw him on if something goes wrong early. because he needs to build up gradually. But starting slowly is one thing we can't afford tonight, having seen for myself how impressively Motherwell swept out Dundee on Sunday. But I am sure that the lads wiU respond accordingly to Saturday's poor performance as we seek revenge for the back to back defeats Motherwell inHicted on us at the end of October.