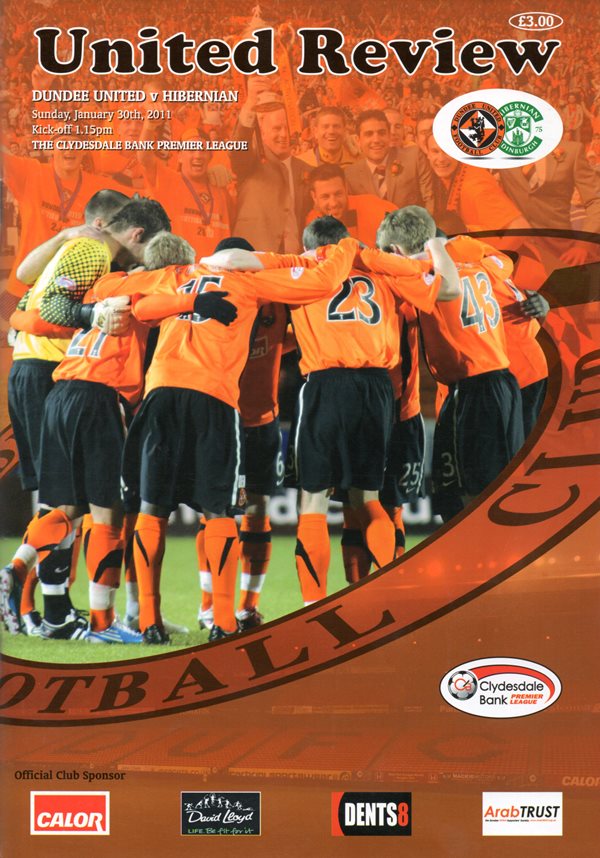 Manager Peter Houston made three changes to the team that started the previous match away to St Mirren, with Scott Robertson replacing Morgaro Gomis and Stuart Armstrong making way for David Robertson, who came off the bench to score the late equaliser at St Mirren Park. Captain Daly also returned to the starting eleven following a suspension, at the expense of Russell. Colin Calderwood’s Hibs meanwhile, who went into the match having gone ten league games without a win and having failed to score in their previous seven matches, were without influential forward Derek Riordan.

The home side started the match brightly and created a couple of early chances, with Conway’s crosses causing all sorts of problems for the Hibs defence. With just three minutes on the clock, a ball to the back post was met by David Robertson, but he couldn’t keep his volley down. A free-kick on ten minutes also led to another half-chance when the ball fell to Sean Dillon, but the defender sliced his effort well wide of the target. Hibernian also created a couple of scoring opportunities in the opening stages, but failed to capitalise. First, through Liam Miller, who out-muscled Barry Douglas at the far post, but the former Celtic and Manchester United midfielder scuffed his shot into the side netting. With 12 minutes on the clock, Hibs had their best chance of the half when a ball into the box was headed down to Danny Galbraith, but he volleyed over the bar. However, moments later United took the lead. Douglas’s cross-field ball was headed into the box by Keith Watson to David Robertson, who flicked the ball into the path of Jon Daly to finish past Graeme Smith in the Hibs goal. United created several opportunities to double their advantage and could have put the game out of sight by half-time. Midway through the first half, a Conway free-kick was whipped into the box, only for Daly to head wide when he should have at least hit the target. David Goodwillie later broke clear down the right and squared the ball across the six yard box as Prince Buaben and Conway raced into the penalty area to meet it, but both were denied by Hibs fullback Richie Towell, who read the danger and got a foot to the ball to clear. United came close again as the half drew to a close. A scramble at the edge of the Hibs penalty area saw David Robertson and Buaben have their attempts blocked before the ball fell to Scott Robertson, who curled his shot inches wide of the post.

It wasn’t until the second half when the home side extended their lead and it took just two minutes after the re-start for the Tangerines to score. Goodwillie collected the ball in midfield and played the ball through to Craig Conway, who raced clear of the Hibs defence. The winger was one-on-one with the keeper and he fired his shot high into the net to put United 2-0 up. Just after the hour mark, United carved out another opening when Scott Robertson and Goodwillie exchanged passes. The striker could have gone it alone, but unselfishly fed David Robertson, only to see his team-mate blaze over with just the keeper to beat. Colin Calderwood’s team rarely threatened Dusan Pernis in the United goal, but the United fans would have been wary of the last time the two teams met when the Hibees came back from two goals down at Easter Road to claim an unlikely 2-2 draw. A mistake by Garry Kenneth gave Hibs there only real chance. The defender was caught in possession by David Wotherspoon who had just the keeper to beat, but Pernis came to United’s rescue, standing his ground to block the shot and gather at the second attempt. However, Housty’s side put the result beyond doubt with ten minutes to go. A Conway corner led to an almighty goalmouth scramble but the Hibs defence managed to clear. But the pressure paid off when Conway collected the clearance and clipped the ball into the box for Johnny Russell, a 72nd minute substitute for Goodwillie. The youngster’s initial header was saved, but the striker was left with a tap-in to seal a 3-0 win.