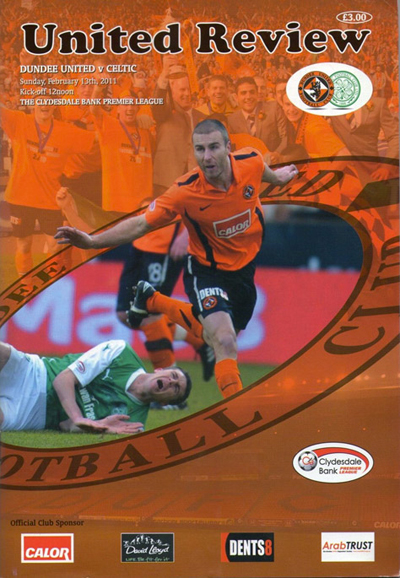 United battled well and will look at the Buaben chance in the first half and Goodwillie's opening in the second as the pivotal points of the game. In the end, and on the balance of play, the visitors deserved the three points. There was only one change to the United side for the visit of treble chasing Celtic. Morgaro Gomis returned to the starting line up with the suspended Jan Daly making way. Two former United men, Mulgrew and Wilson, started for the visitors.

Celtic threatened early on when Charlie Mulgrew swung in a free kick that Pernis saved low to his right after five minutes and ten minutes later, Kris Commons, volleyed over. But two minutes later. the deadlock was broken. Kayal dispossessed Scott Robertson in the middle of the park and found Anthony Stokes and the former Hibs frontman slammed in a shot which took a wicked deflection off Garry Kenneth to leave Pernis helpless. That lead was almost short-lived, because two minutes later Prince Buaben got in behind the Celtic defence, but hesitated slightly and Forster saved his shot. The rebound fell to David Robertson but the Celtic keeper saved his follow-up effort. At that stage it was all Celtic and with half an hour gone Hooper sent a rasping shot inches over. Ten minutes from the interval, Celtic did double their advantage. Former United defender Mark Wilson collected the ball on the halfway line before exchanging passes with Hooper to burst into the United box. His first time effort looked like meat and drink for Dusan Pernis, but another deflection, this time off Sean Dillon, saw the ball fly into the bottom corner. Towards the end of the half, Commons had another effort at goal and then in a mad goal mouth scramble both Ledley and Stokes had shots blocked by the home defence. On the stroke of half time United almost handed themselves a lifeline when Goodwillie beat the offside trap, but screwed his shot wide of the far post.

Four minutes after the restart, it should have been over as a contest. From a comer on the right, Commons found the unmarked Majstorovic, but somehow the big Swede headed wide of the gaping goal. With Swanson replacing Gomis, United enjoyed their best spell and Craig Conway volleyed just over. Ki took Commons place for Celtic and simultaneously, Johnny Russell replaced Buaben. Within a minute, United were back in the game. Wilson conceded a foul on the left and Conway's cross came off the head of Majstorovic and though Forster saved well, David Goodwillie pounced to net the rebound. With 20 minutes left. United were desperately unlucky not to draw level. Substitute Russell set up for Goodwillie who drilled a shot under Forster, but cruelly the ball bounced up and over the crossbar. With the game flowing from end to end, Dillon was almost punished for a slack defensive header which Hooper latched on to, but with only Pernis to beat, he hit the post. However, the visitors restored their two-goal advantage after 76 minutes. Swanson fouled Samaras and when Mulgrew found Daniel Majstorovic the Celtic centre back made no mistake with his header. In the dying minutes Celtic might have scored a couple more. Firstly, Hooper missed from close range and then did get the ball in the net, only to be ruled offside.

Man of the Match: David Goodwillie chased every ball for United and once again was on the score sheet. He looked a threat all afternoon for United.

After our long series of drawn games it was good to post back-to-back wins in our last two outings with the victories over Hibs and Hamilton very important ones. Beating Hibs took us back up to the top six and, while the win at Hamilton meant our defence of the Scottish Cup continues with a home tie against Motherwell. Whilst there were many aspects to be pleased about our biggest win of the season against Hibs, it wasn't all plain sailing. At times I thought we got a bit sloppy. In fact, we have certainly passed the ball better in other games. In fact, having gone two up. we panicked. We couldn't get the ball out of our own box as Hibs threw men forward. And before we scored Danny Galbraith had a great chance, and had that gone in, we would have been chasing the game that's how fickle football is. Although the final score looks comfortable, I was far from comfortable in the dugout, but ten out often for the resilience the team has again shown and once again their effort and workrate was second to none.

It was only after Johnny Russell got the third goal, that I was really able to relax. That said, I was delighted with the victory. And I felt exactly the same after beating Hamilton last week, because it was a complete team performance. We showed terrific composure at the back, won the midfield battle and out strikers looked sharp. However, there was one black mark. Having gone in two ahead at the interval, I told the players to guard against losing an early goal after the break, but lo and behold that was exactly what they did! Fortunately, they were professional enough to handle that. It has been a stop start season through injuries and postponements, but hopefully we are running into form at just the right time. I have to admit that I am glad we had no game this midweek as the players need a break especially with the hectic schedule that lies ahead of us. In fact the game at Inverness being called off the previous week was a blessing in disguise. So much so we would have been without Jon Daly, Prince Buaben, Moragro Gomis and Craig Conway had it gone ahead. But they all made it for last Saturday, though none of them were fully fit and that says everything not only about them, but the squad as a whole. So with only Craig Conway away with Scotland and Johnny Russell and Stuart Annstrong with Under-21's, most of the lads have had a bit of a breather. And they'll need it ahead of today's high noon clash with a Celtic side bang in form. I took in the Old Firm cup clash at Ibrox last week and they showed in the second half what a good passing side they are and we'll undoubtedly have to be at our best to take something from the game. However, we ran them very close in the last meeting here and, of course, held them in the last meeting at Parkhead, so another close game is very much in prospect.