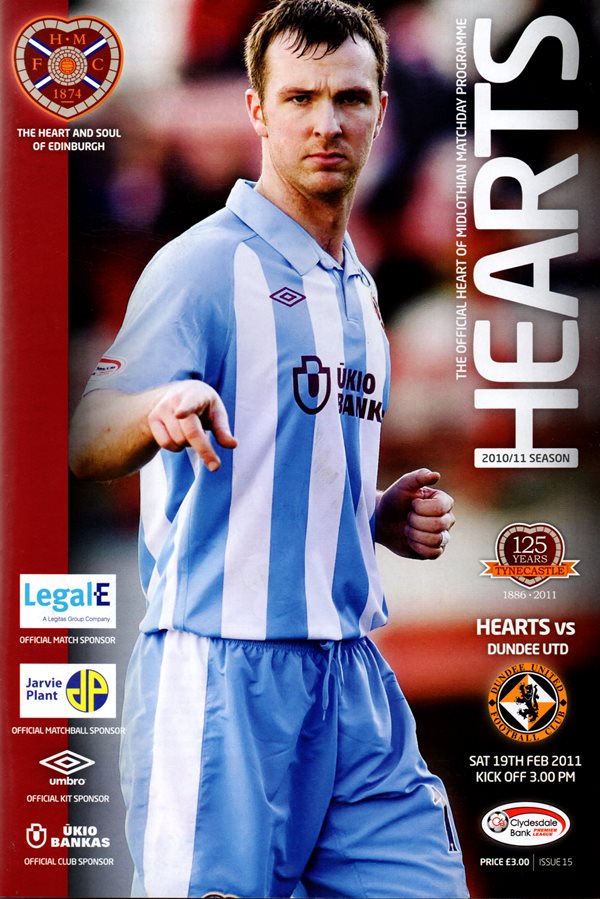 Despite taking an early lead, United succumbed to a late Marius Zaliukas header to leave the capital with nothing. Making the defeat even more frustrating, David Goodwillie's injury-time penalty was saved! Johnny Russell for Morgaro Gomis and Barry Douglas taking injured Craig Conway's place were the only changes from the side beaten by Celtic.

In a lively start. United had the ball in the net within 70 seconds, but Goodwillie's effort was chalked off by referee Calum Murray for what was adjudged as handball. However, just minutes later United did score. In a role reversal, Goodwillie turned provider for Barry Douglas as the striker's cross from the right seemed to be met by the head of Douglas as he battled with Eggert Jonsson and Andy Webster and the ball looped over Kello into the top corner. Hearts' first real chance of the match didn't come until the 24th minute. Good work by Jonsson allowed Stephen Elliott a shot on the turn, but his low drive went just wide of the left-hand post. Five minutes later, United were inches away from doubling their lead. Following a Douglas comer. David Robertston fed the ball back out to Douglas. His looping cross to the back post was met by Carry Kenneth whose downward header flashed by Kello's post. Seconds later, Kenneth was very nearly the villain. Attempted to play to keep the ball in their own half, Rudi Skacel robbed Kenneth and made for goal, but in the end his shot was well parried by Pemis. There was a blow for United two minutes from the interval, Kenneth limping off after being injured in a challenge minutes earlier, replacing him was Dutch debutant Timothy van der Meulen. Unfortunately his first involvement was in Hearts' equaliser. A seemingly innocuous low shot from EIliott proved too tricky for Pemis to hold and Rudi Skacel was the first to react in the box to bundle the ball into the net in first-half stoppage time.

Hearts withdrew David Obua at half-time, David Templeton replacing him and he immediately made his intentions clear with a good run and low shot that went just wide. The first real chance of the half fell to United though as Prince Buaben found himself through on goal. However, with Goodwillie in the middle, the midfielder chose to go it alone but fired into the side netting. Seconds after that. Van der Meulen nearly made himself an instant hero but his half-volley fizzed just over the bar. The second half was continuing in the same entertaining vein as the first as both teams sought the lead, but clear-cut chances were few and far between. On 68 minutes. Prince Buaben tried an ambitious 40-yard free kick and although he struck the ball firm and low, it was always Hying wide of Kello's left-hand post. Hearts came very close with five minutes to go -- substitute Andy Driver was allowed two point blank shots on goal but he saw them blocked by Dillon and Pernis as United held on. It was momentary respite however as Marius Zaliukas rose unchallenged in the box to power a header past Pernis. Hearts nearly made it three in stoppage time but Pernis, doing well to parry Elliott's shot. It wasn't game over though, because there was still time for further drama when David Robertson was tripped by Ruben Palazuelos in the box. The Hearts defender saw red but from the resultant spot kick, Kello pushed Goodwillie's effort back to him, but from he hooked the ball wide and bang went any hopes of salvation.

Man of the Match: It was a good all-round team performance from United but Scott Robertson looked like he was getting somewhere back towards his old form with a decent midfield performance.