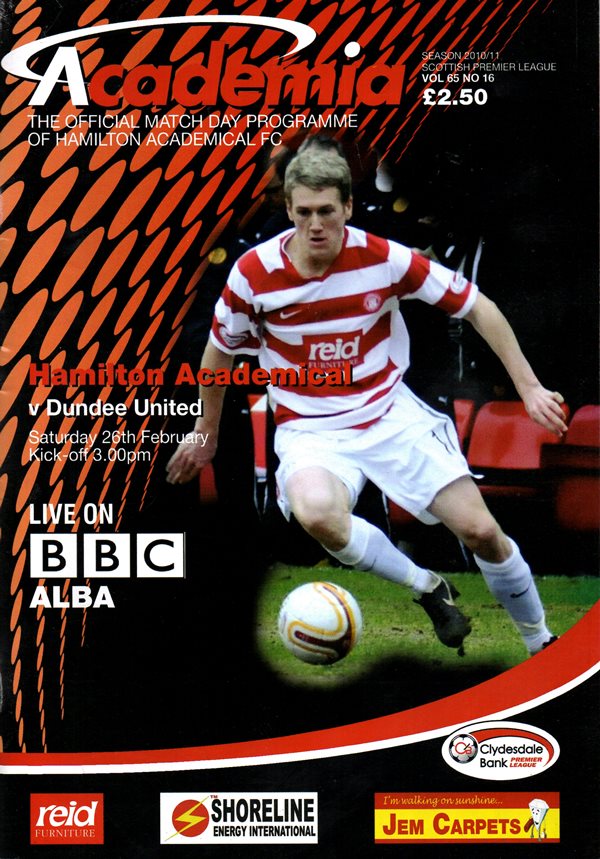 United again showed their battling qualities to rescue a point. But the reality is that they had enough chances to have had the game wrapped up before finding themselves trailing to a soft penalty. The late leveller from Andis Shala was no more than Peter Houston's side deserved even although they were never at their best. No changes on the United starting eleven from the one that drew at McDiarmid on Tuesday. Indeed, Filip Mentel replacing goalie/coach Steve Banks who was out because of a back injury was the sole change to the 18 on duty.

In complete contrast to the mud bath of Perth in midweek, the New Douglas Park pitch was of bowling green proportions and unlike the Scottish Cup match four weeks earlier, which United so dominated, Accies made the early running. But the visitors' first attack of note after 12 minutes should have produced a goal. Skipper Scott Robertson made ground down the right and crossed to the unmarked David Goodwillie at the near post. His downward header completely wrong-footed Tomas Cerny, but bounced a yard past. And seven minutes later only Cerny, at full strength, prevented Craig Conway from giving United the lead. Two minutes later another chance was passed up, Goodwillie firing the ball across goal, but Johnny Russell, at full stretch, knocked it past. Accies were enjoying plenty of possession, but without threatening, though Skelton voUeyed over from 15-yards after 27 minutes. Six minutes later, however. United fell behind to a dubious looking penalty. Skelton burst into the box and appeared to throw himself at Prince Buaben, but a penalty was given. Mikael Antoine-Curier netted - Accies' first goal since the striker was on target against United in the 3-1 Scottish Cup defeat. Just before the break, Scott Robertson saw a first time effort deflected past, leaving his side trailing at the interval.

The home side had the ball in the net again within two minutes of the re-start. Fortunately Antoine-Curier was off-side before firing home. Hoping to inject more creativity, Houstie made a double substitution a minute later midfield pair Prince Buaben and David Robertson retiring with Danny Swanson and Stuart Armstrong replacing them. Having failed to trouble Cerny in the second half, striker Andis Shala was introduced for Timothy van der Meulen with United going three at the back. Within minutes left Casalinuovo spun away from Sean Dillon to leave himself with a great scoring opportunity, only to, thankfully from a Tannadice perspective, fall over the ball! With time beginning to run out. United at last threatened. Dixon's comer was cleared to Dillon whose overhead kick was goalbound, but McAlister thumped the ball clear. Cerny kept out a raking 25-yarder from Paul Dixon with six minutes left and Dicker took the resultant corner. The ball was only cleared to Conway who delivered a cross into the box from which Andis Shala directed a header into the bottom corner to earn a point. And right on time Goodwillie might have grabbed the winner. Put through by Swanson, he beat Mensing to bear in on goal but Cerny blocked his shot from close range.

Man of the Match: in a below par performance, there weren't too many candidates, but the ever dependable Sean Dillon was a rock in defence and went close to scoring with an overhead effort that was cleared off the line.