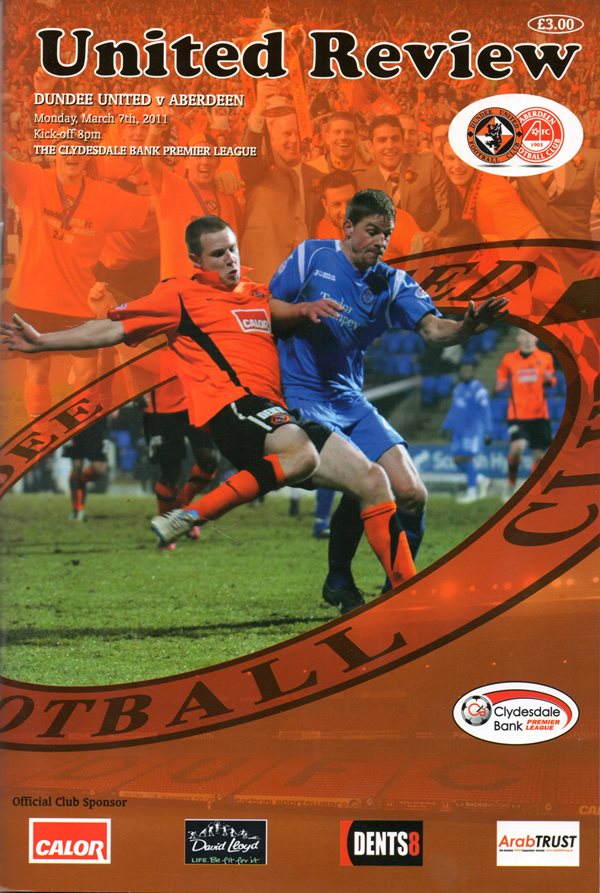 Peter Houston made two changes to the team which had won 2-0 away to Inverness with Paul Dixon missing out through illness and Stuart Armstrong dropping to the bench. In came Timothy van der Meulen and Prince Buaben who had come off the bench to score United's opener in the Highlands.

United won an early corner and it was cleared. The visitors took the ball to the other end and won a corner when Van der Meulen cleared. Diamond met the cross well and his effort was well saved by Pernis. The Aberdeen skipper had to leave the field for a head wound and returned wearing a bandage. His first contribution on returning to the field was to pick up a deserved yellow card for a lunge at Buaben. Goodwillie shot wide and a Conway free kick was knocked wide by Scott Robertson. Goodwillie looked by far the most threatening of the United strikers and he freed Watson on the right and the full back’s cross was knocked just wide by the United front man. An Aberdeen break saw Young take a sore one in a challenge from Buaben but the referee saw nothing wrong with the challenge. United went route 1 and a long ball from Pernis had the Aberdeen defence struggling with Swanson looking to get in on the bouncing ball. Scott Robertson went down under a high challenge in the box by Considine but again the referee saw little wrong with the challenge. On 27 minutes Conway won a corner on the left and when the wide man took the resulting kick, Barry Douglas met it at the near post to beat Langfield with a fine header. Aberdeen were flustered, another United corner was hit goalwards by Gomis, the shot struck the post and rebounded hitting Langfield on the back and going out for a corner. Diamond had to be replaced by McArdle as the visiting defence rocked. The visiting keeper’s luck was rapidly running out and when Craig Conway struck the ball well from 25 yards he totally misjudged the flight of the ball and pushed it into his own net. A strike from Jack saw Pernis jump into action and make a smart save at his near post. United were dominating proceedings and a break by Swanson saw his shot deflected into the arms of Langfield with Watson and Goodwillie looking to be played in. The visiting fans’ frustrations grew as their team were consistently a yard out with their passing. The half closed as it had been played. United were passing the ball well and using the width of the pitch leaving the visitors chasing shadows much of the time, indeed a showboat session from Danny Swanson and Craig Conway brought the half to a comfortable end.

United returned to the field first and the visitors were slow to emerge but they seemed keen to make amends for their first half failings. Magennis had replaced Aluko and he was looking more interested than his colleagues had in the first 45. Danny Swanson was first to threaten though when he sent a dipping shot onto the roof of the net. However Aberdeen were soon right back in the game when Josh Magennis headed home a cross from Jack five minutes after the restart. Pernis pushed a Milsom shot wide and then the visitors forced a corner as they tried furiously to level. Craig Conway was replaced 10 minutes into the half by Andis Shala with the United flair man having apparently picked up a knock. Goodwillie clattered the post with a superb overhead kick after a Watson throw was not dealt with by McArdle. Not to be denied, Goodwillie played a beautiful through ball to Danny Swanson who then lashed a powerful shot past Langfield from the edge of the box. The ball was struck so early that Langfield had absolutely no chance. United looked more like the side of the first half. Shala hit a weak shot goalwards and Langfield managed to let the ball slip through his arms and legs before recovering. A corner for the visitors saw Pernis clattered twice as the Dons began to vent their frustration. United were passing the ball beautifully in the midfield. A long through ball to Goodwillie saw Shala just caught offside as United stretched the visiting defence. Swanson was replaced by David Robertson with 20 minutes remaining as United looked to close the game down. Magennis threatened again forcing Pernis into a good save at his near post but the corner came to nothing. Goodwillie appeared to be denied a stone wall penalty when he was fouled by Considine as he collected a deflected free kick. Then Goodwillie was unlucky not to finish when he stretched to connect with another long ball by Pernis. Great play down the left saw Buaben play Gomis in but his shot was blocked. As the game ran out of time, Johnny Russell replaced David Goodwillie but United were in no further need of posing a threat as the game was over even when the Fourth Official showed three additional minutes to play the game was comfortably won. Overall a convincing football performance by United who simply outplayed a strong and physically imposing Aberdeen side.

After a month on the road, it is nice to be back at Tannadice for what is a hectic spell of five home games in just twelve days. Before completing our recent run of four consecutive away games, Celtic beat us in our last home outing. And being honest, we can't have too many complaints about the outcome. Frankly, I didn't think we turned up in the first half, getting nowhere near to the standards we are capable of producing. Possibly we showed them too much respect and there was maybe also a lack of self-belief, which isn't like us. Though, we had a decent second half and had a chance of getting back to 2-2, over the piece Celtic were worth their win. Our away days started at Tynecastle and showed how cruel football can be at times as we went down by the odd goal in three. Certainly, I don't think we deserved to lose, but I was delighted with the players and despite the defeat, took more positives from it than when we beat Hibs 3-0 in January.

If the game against Hearts was an entertaining one, unfortunately the same cannot be said for the goalless draw with St Johnstone at Perth. Because the pitch wasn't conducive for any kind of football, any mistake was going to win the game. St Johnstone don't usually play like that and neither do we. Both St Johnstone and ourselves like to passes, but I told players not to, because if you play through the middle of the park you end up getting robbed. Both teams were putting balls out the with nobody near them and that's not for lack of skill. I feel sorry for the punters, but I don't blame myself or Derek Mclnnes because you are out there trying to get as many points as you can for your team and finish in the top six. Consequently, I was frustrated and disappointed not to have come away from New Douglas Park with a win. In my book, we really should be picking up three points from games like that. We should have had the game done and dusted seeing as we had four outstanding chances. Instead, we left it too late to get an equaliser and even then David Goodwillie had a chance to win it.

Before the game at Inverness, after all the drawn games, the pressure was on us a bit and I just felt it was a game we had to win. With so many games coming up, I freshened things up a wee bit and I was really pleased with the players as we thought this would be a very difficult game. Most pleasing was that we passed the ball well, which we had to do, as there is not a lot of height in the side. And after we went one-nil up, I thought Swanny's legs were going a bit, so we brought on Davie Robertson. He is always a safety guard but he has scored as well. So it was great to go up there and pick up three points that enabled us to leapfrog Caley Thistle into the top six and keep a clean sheet. With this against Aberdeen being delayed until a Monday, it afforded me the opportunity to give the players a day off. They have had very few breaks recently and deserved a rest ahead of three game in six days this week. For the first of these it is a pleasure to welcome Craig Brown and Archie Knox for their first visit in charge of Aberdeen. Under them, as I expected it would, the Dons form has really picked up, because they are two really experienced guys who have made several excellent additions to their squad. And the improvement is there for everyone to see with the side playing with a lot of confidence. This being a derby, it will be fiercely contested and a cracking game, but it definitely won't be an easy game as we found at Pittodrie when we met them at New Year, only coming home with a point thanks to a last minute Goodie goal. So with fortunes fluctuating in these games, let's hope it goes our way tonight as we look to extend our lead over the Dons in the fight for a top six place.