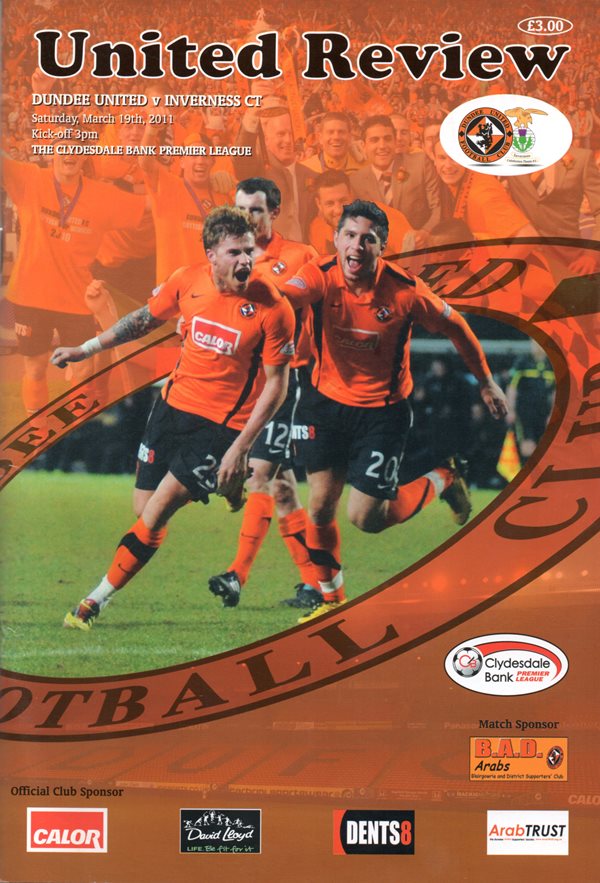 United were dealt a blow shortly before kick-off with the news that stand-out centre half Sean Dillon had failed a fitness test after suffering a dead leg in the midweek win against Hearts. The only change from the side that won that match 2-0 was to promote winger Danny Swanson from the bench in place of the Irishman, meaning the versatile Barry Douglas dropped back to left back to allow Paul Dixon to line up in the centre of defence, alongside skipper Jon Daly. There was also a surprise place on the bench for centre half Scott Severin, following his lengthy injury lay-off.

It was United’s first league game at Tannadice on a Saturday afternoon since the game against Kilmarnock more than four months previously and within the first couple of minutes Keith Watson created the first chance when he played in a good ball from the right flank to midweek matchwinner Johnny Russell, who showed some good spring to get above the defender but nodded over the bar. The first test for the makeshift United defence came after nine minutes. Jonny Hayes got the ball down well on the right and played a dangerous ball to the far post, where Richie Foran ghosted away from his man to get a header in that Dusan Pernis did well to hold comfortably. United were playing a patient game, with three centre midfielders trying to get on top of Caley’s 4-4-1-1 formation and a great team move nearly brought the breakthrough. Morgaro Gomis got the ball down in the centre of the park and played it out to Goodwillie on the left, who cleverly picked out Danny Swanson, who laid it back to Robertson driving to the edge of the box but he played his low effort wide of the post. Caley were looking like they could cause problems and on 20 minutes they nearly took the lead. Eric Odhiambo, who once spent a loan spell at Tannadice, broke through on the left edge of the six yard box then touched the ball back for a short range effort from Hogg that Pernis did brilliantly to save with his legs. Hogg followed in and tried to force the ball over the line and left Pernis – who held on firmly – nursing a nasty looking injury. The big Slovak managed to shake off the knock and continue. In the final 20 minutes of the first half, United began to get on top for the first time. First good work by Goodwillie to speed past a few Caley defenders nearly found David Robertson surging into the box but he couldn’t quite get to the cut back ahead of the Caley defender. Then Danny Swanson touched the ball past Russell Duncan before curling in a left foot effort that was deflected wide. United continued to exert pressure on their opponents and Goodwillie broke away on the right, touched it by Hogg onto his left foot that fired in an effort that Esson did well to parry behind for a corner. With three minutes to go before half time, the breakthrough came. A Barry Douglas corner was punched away to the right edge of the box, then David Robertson returned it into the box for Scott Robertson who nodded the ball down to Danny Swanson to side foot a perfect effort beyond Esson.

Caley had came out flying and were putting the pressure on in the early minutes of the second half. But a pacy break from Goodwillie found Swanson racing through on goal. He tried to speed past Tokely and was blocked – only for the penalty shouts from the Eddie Thompson Stand to be waved away. Close to the hour mark, a good move from Caley found substitute MacDonald and his effort from the edge of the box was well saved by Pernis who got down well. It had become an end-to-end match and United missed a golden opportunity two minutes later when Russell played a cross into the box that Jon Daly – suddenly finding himself in familiar territory in front of the opposition goalkeeper – nodded on to David Robertson. He looked certain to score when he found himself free only a few yards out but volleyed over the bar. With 25 minutes to run, United had another chance after winning a free kick on the right when Douglas was fouled after a clever ball from Russell. Swanson played the free kick into the box and Scott Robertson connected well but his effort was deflected over. A few minutes later, Swanson chested down a pass from Scott Robertson and his curving shot with the outside of his foot from nearly 30 yards dipped just over the bar. United’s defence was holding firm and restricting the number of chances Caley had, as shown with 20 minutes to go when a dangerous free kick from the impressive Jonny Hayes was brilliantly headed out for a corner by Jon Daly, who continues to look a natural playing at the heart of the defence. As the game ran into its final phase, some great harrying from Gomis won the ball in midfield. He played it to Goodwillie, who laid it off for Gomis again. He then tapped it on to Russell in space on the right but he blasted over. In the final 10 minutes, Caley had a lot of pressure but couldn’t find a way past the United rearguard to fashion shots on goal. Paul Dixon in particular seemed to always be there to break down Caley’s attacks and made two vital interceptions in the final minutes to keep Caley at bay and seal another fine victory for United at Tannadice.

On Wednesday the players again dug deep to produce another late, late show to beat Hearts and maintain our tremendous recent form. Truly, their energy and fitness levels are quite unbelievable. There was an SFA drugs test after the game and big Jan Daly was the unlucky one who was tested, but I think they should have tested everyone to find out where they get their energy levels from! We got two great goals from Johnny Russell and we have just signed him up on a new contract and against Hearts you saw why. I don't want to pick out individuals, though, because we worked ever so hard as a team and I thought we were brilliant in the second half. The main thing is that we are now up into fourth place, but don't count me amongst those even contemplating us finishing third. Really, I don't think we are capable of catching Hearts because they are a good team and will pick up a lot of points between now and the end of the season.

I don't know if Hearts will split the Old Firm, but they have been the best of the rest this season and I have no problem in saying that. I was just happy to win on Wednesday and don't want to look any further forward than this afternoon's game against Inverness Caley Thistle. With this being the fifth game in just twelve days and I propose making the most of there being no game next week. Already, they have been told to stay away from Tannadice until next Friday. And if they make it five straight wins this afternoon, they'll get an extra day and, if they do, they'll deserve it. They've been amazing and to beat Hearts with such a strong second half performance was incredible. A lot of the boys were playing their fourth game in nine days and it says everything about their fitness that they were still able to find the energy to beat a very good team. With a small squad and the injuries we've had, it's a huge effort and they've done themselves proud.

Unfortunately, the injury situation is still a concern. Garry Kenneth faces another three weeks on the side lines after a scan showed his knee ligament strain needs more time to mend, which is very frustrating for him. He feels fine, but if we were to let him play he'd be risking his cruciate, so he'll have to be patient. Straight running is no problem, so he'll keep working, but it will be another few weeks before he's back playing. David Goodwillie and Scan Dillon both took knocks against Hearts, but should be okay to, for this afternoon. Meanwhile, Craig Conway is also likely to be in contention, while Danny Swanson will be challenging for a starting place after coming off the bench against Hearts. Whilst, we defeated Inverness Caley up there at the beginning of the month, there is absolutely no doubt that we face a testing afternoon. Since that game, Terry Butcher's side have beaten Motherwell 3-0 and ran Celtic so very close in midweek, so there is no danger of there being any complacency in our dressing room. Finally. I'd like to add my thanks to our supporters for their continued support home and away. It was much appreciated by myself and valued by the players. And the best way to repay it is by continuing producing the goods on the park as we have done so far in the last month.