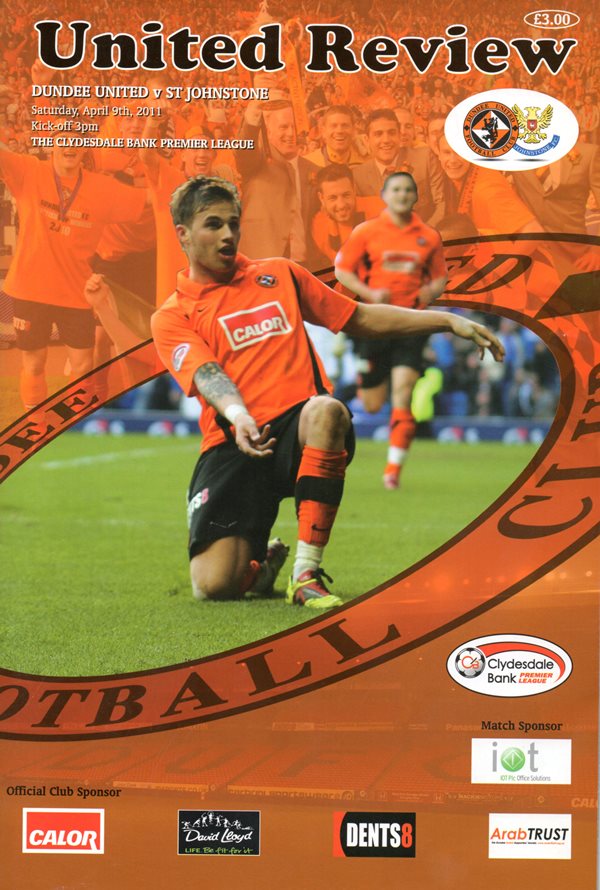 The Tangerines welcomed local SPL rivals St Johnstone to Tannadice in another crunch league meeting on a glorious afternoon in Dundee. Having embarked upon a quite unbelievable run of results during March, winning 5 out of 5 in the league, the hosts’ form of late had been more mixed, with a stunning last gasp victory at Ibrox sandwiched between two disappointing losses away to Motherwell. With Hearts 10 points clear of the Terrors in third prior to the game a win for United was surely a necessity for any hope of matching the previous season's league finish to remain alive. On the selection front, Peter Houston made three changes to the side which lost narrowly at Fir Park, with the result an overall more balanced looking starting side than we had been used to in recent months. Keith Watson, who had been one of United’s best performers of late, missed out with a calf injury allowing Garry Kenneth to take his place in central defence alongside Scott Severin, with Sean Dillon moving back out to right back. Both Scott and David Robertson were left on the bench as Buaben and Swanson returned to a midfield which looked capable of giving the home side plenty of options in the wide areas. On form hit men Goodwillie and Russell looked to continue their superb return in front of goal against a Saints side which included ex United men Grainger, Anderson and Samuel in their starting line up.

With less than a minute played Saints’ Steven Anderson upended Swanson as he bore down on goal presenting a free kick opportunity from around 30 yards. After a short lay off Buaben could only shoot high over the bar when ideally the visitors’ replacement goalkeeper Graeme Smith would have been tested. Moments later Goodwillie just failed to make a proper connection on a Swanson cross before Smith held then Anderson again felled Swanson as he eased past him on the right flank, this time no punishment was awarded with the visiting defender now under serious threat of leaving the park early. After 14 minutes this threat became a reality and Saints were down to 10 men as Swanson again evaded Anderson whose trailing leg and subsequent trip left referee Mike Tumilty no option but to send off the visiting defender following a quick consultation with the 4th official. Michael Duberry then just managed to head the ball out for a corner as Garry Kenneth rose at the back post looking poised to head goal ward from the resulting free kick. With the home side looking to gain control against the 10 men it was Pernis who was forced to make the first save of note after 20 minutes when a Grainger free kick was neatly tipped over for a corner. Pernis again had to look lively when a low curling effort from Murray Davidson looked bound for the bottom right hand corner until the goalkeeper’s timely intervention. United almost went ahead on the half hour mark when a teasing cross by Conway was glanced towards goal by Swanson but Smith was in the right place to prevent a goal. There were further bookings for Severin, Swanson and Saints’ Chris Millar before half time as the challenges continued to fly in thick and fast. Then right on the stroke of half time the hosts were in front after a long range effort by Swanson was blocked just inside the box before breaking kindly for Johnny Russell who slipped by goalkeeper Smith before slotting into an empty net in front of the joyous band of Arabs behind the goal.

It was a quiet start to the half but United were patient and were keeping possession well as they looked to push the visitors further back into their half. This said, the Perth side were not out of things whilst the score remained at 1-0 and a couple of long range shots from Samuel and then Invincible, the latter giving Pernis a problem as the ball bounced towards him, were a clear reminder of this. Just after the hour mark Goodwillie spun round Maybury and there was a hint of an appeal for a penalty as the United man went down, with Russell guiding the ball wide as the ref continued play. Chances were at a premium in the second half but there was an opportunity for Goodwillie when he found clear space in front of Smith as Conway flighted in a free kick but United’s top scorer headed over. A second goal for United was definitely going to seal the points and sub David Robertson obliged in the 85th minute. Goodwillie did brilliantly to turn his man and broke into the box before passing the ball across the face of the goal where the midfielder was lurking to slot emphatically into the net from 6 yards out. There was still enough time for Pernis to pull off another fine stop as he palmed away an injury time strike from Davidson as the hosts work was completed.

Life is a roller coaster and that is certainly the journey on which we have taken our fans since our last home game. Victories over Inverness Caley Thistle and Rangers extended our run of straight SPL wins to a magnificent six, but double defeats to Motherwell were body blows. It was bad enough that our unbeaten league run came to end last Wednesday, but going out of the Scottish Cup, and particularly the manner of our exit, was to say the least, extremely disappointing. In fact, I would have to class it as the worst performance since I became manager! It was that poor, and I include the 7-1 defeat to Rangers in that. The hungrier and more determined team went through. For whatever reason, we just didn't turn up with Motherwell clearly wanting the semi-final place more. Above all else, we had a fantastic travelling support we let them down so badly. Fortunately, we went some way to atoning for that cup exit with a terrific win at Ibrox last Saturday. To twice come from behind against a good Rangers side shows resilience and determination so I can't praise the players highly enough.

And I was particularly pleased for our punters after what we had put them through at Fir Park. Unfortunately, Fir Park continued to be our Achilles as we lost there for the fourth time this season in midweek. Despite that defeat, I think it is better to dwell on the positives of our recent run. We've battled against circumstances all season — and for the boys to be in the position they're in now is fantastic, even if equalling last season's third place finish is now beyond us practically, if not theoretically. Even before Wednesday, I thought that, but still hoped that we could reduce the gap to seven points. But we've just had sue games that we've won in the league — 18 great points — and not to take anything from Motherwell was a disappointment. Most frustrating as the run came to an end was that I thought we deserved at least a draw. If we had gone there and failed to create chances as happened in the cup, I'd have been really disappointed, but we created plenty. However, the game was lost in the first half when we gave away two bad goals, giving ourselves a mountain to climb. To be fair to the lads, I couldn't have asked more from the players in their efforts to peg it back. The last half-hour was like the Alamo and we created more than enough chances to take something from the game. Bad luck and good goalkeeping denied us, so to have put so much into the last 30 minutes and take nothing from the game was disappointing."

There were some positives, getting Carry Kenneth back on the park and Scott Severin playing for 90 minutes were the main ones. It meant we got our central halves back and now we can work on our defence, and hopefully, for the rest of the season, instead of losing cheap goals, we can start to keep clean sheets. And that is something that we'll be looking to do as we welcome St Johnstone this afternoon. Although Saints have been struggling to find the net of late, apart from not getting into the top six, they have been doing well and it makes me a bit wary, all the talk of them not scoring much. They've got to score sometime, so we must keep it tight. Hopefully they can save finding the net for next week's Scottish Cup semi-final with Motherwell. You also have to factor in that it is a derby- and you want to win your derbies - and that is just what we'll be aiming to do.