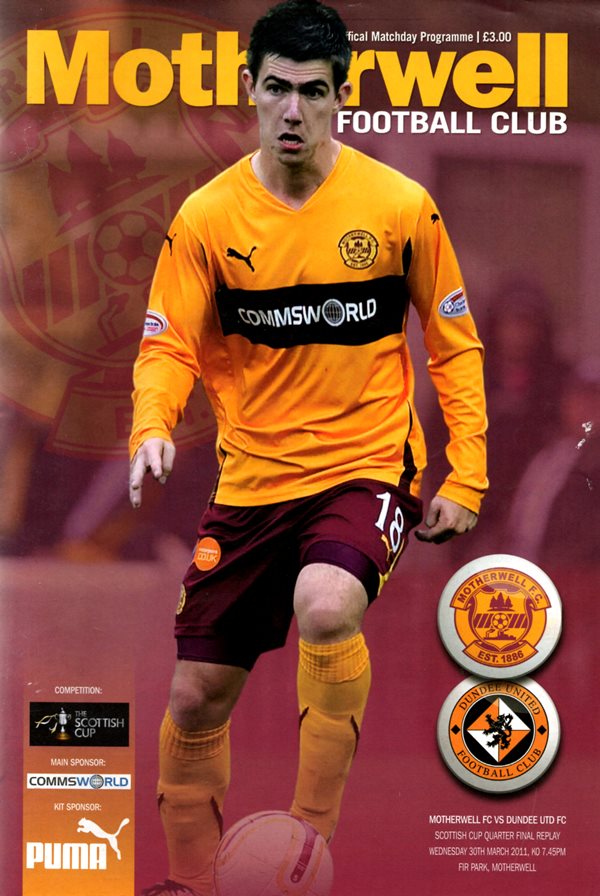 The Club's reign as Scottish Cup holders came to an end in unceremonious fashion. And there could be no complaints as United were totally outplayed by a rampant Motherwell side that had their opponents on the back foot for almost the whole 90 minutes. Houstie made three changes from the side that had made it five successive SPL wins against Inverness Caley Thistle 11 days previously. One was enforced because Morgaro Gomis was suspended. Prince Buaben returning from an SPL ban took his place. Sean Dillon returned after injury, taking his place alongside skipper Jan Daly and with Paul Dixon moving to left-back, Barry Douglas dropped to the bench. Craig Conway for Johnny Russell was the third alteration.

With a semi-final place at stake and a big crowd creating a real cup tie atmosphere, the game started at a cracking pace with Motherwell, unfortunately, making most of the running. Three minutes had gone when Chris Humphrey dragged a shot from the edge of the box wide of the far post. Two minutes later, Tom Hateley's in-swinging free-kick had no takers as it flashed past the far post. United hopes, however, suffered a severe setback after eight minutes when Motherwell took the lead for the third time in the two ties - and this time there was to be no comeback! It came via a route one. Keeper Darren Randolph's long goal kick was flicked on by John Sutton to Jamie Murphy on the corner of the box. The striker took a couple of paces forward before burying the ball in the bottom corner from just inside the angle of the penalty area. Disappointingly, United were struggling to get any sort of rhythm going with their opponents pressing tactics working to a tee. Murphy operating wide on the left. was causing havoc and from a run that took him across the face of the goal, Arabs behind the goal were relieved to see his shot fly well over. But seven minutes later, there was no such let off as Stuart McCall's side doubled their lead. Again, it came from the left, Stevie Hammell supplying the cross from which Sutton's head flick found Chris Humphrey at the back post and he powered home a volley from six-yards. That prompted instant action by Houstie who brought on Barry Douglas with David Robertson the man he replaced. Barry went to left-back with Dixon slotting in beside Dillon in central defence. That allowed Jon Daly to go forward and partner Goodie as United went 4-4-2. However, little changed as Motherwell continued to dominate. With five minutes of the half left, United finally got a shot on target, but Scott Robertson's 25-yarder was easily fielded by Randolph. The last kick of the half saw Douglas' first timer fly over, but at least it was an effort on goal.

The large Arab support did their vodferous best to get the side going, but still Motherwell held sway. Ten second half minutes had elapsed when United finally made in roads behind the 'Well defence, Goodie leading the charge before going down in the box under Jenning's challenge, but no penalty was forthcoming. After 63 minutes, United's reign as cup holders was effectively over as the Steelmen scored a third. Francis Jeffers collected the ball on the edge of the box and drilled a right-foot shot into the bottom corner.