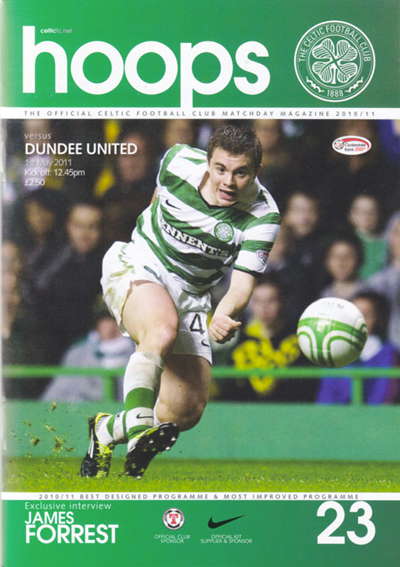 The long wait for a victory at Parkhead continues after United were swept aside by title-chasing Celtic. The home side were on top for much of the game, with United unable to find an answer to the wide play of Kris Commons or a stylish performance from midfielder Beram Kayal, who pulled all the strings for Celtic. Manager Peter Houston was picking from the strongest squad he has had to choose from all season, with Morgaro Gomis, Paul Dixon and Scan Dillon, all suspended for last week's win over Kilmarnock, returning to the side in place of David Robertson, Barry Douglas and Keith Watson.

Within the first two minutes. Dusan Pernis was called into action, parrying away a James Forrest shot. Though Celtic looked nervous in defence in the early stages, they were always dangerous going forward and Scott Severin did well to block a Kayal effort. Celtic almost edged ahead after 12 minutes, when a Kris Commons shot was diverted onto the post by Anthony Stokes. However, the breakthrough came after 23 minutes when Garry Kenneth was dispossessed by Stokes on the right and the Irishman's cross was sidefooted in by Gary Hooper. Towards the end of the half. United did stem the Celtic tide. Indeed their best two chances came in the last minute. Goodwillie did well to beat Wilson only to see his shot blocked, then Scott Robertson burst into the Celtic box only to be tackled before he could get a shot away.

Starting the second half well, some neat exchanges between Buaben, Gomis and Robertson led to Gomis getting a clear sight of goal, only for his mishit effort to trundle wide. Celtic nearly scored a second but stand-in captain Kenneth brilliantly blocked a Stokes shot on the line, then scrambled away the resultant header from Brown. Celtic penalty claims for handball were turned down eight minutes into the second half when Dbcon blocked a cross. A minute later, they did double the lead, Baram Kayal scoring with a spectacular 25 yard effort. Houstie switched to a more attacking 4-4-2, with strikers Russell and Jon Daly replacing Danny Swanson and Buaben. But that didn't stop the Celtic attacks, with Pernis having to be alert to save a low drive by Kayal. On the hour mark, great play saw Goodwillie release Russell, who skipped past two Celtic players before firing an effort that smacked the post. Then Gomis brought out a save from Forster with a sweetly struck effort from the edge of the box. Russell was making a difference and he did well to get on the end of a Severin through ball, only to chip his shot over the bar. Kenneth was putting in a commanding performance at centre half in the second half and did well to get in a saving challenge on Hooper. Pernis then saved well from a Wilson header. With five minutes left Kris Commons added his name to the score sheet when he swept an effort below Pernis after a goalmouth scramble. In injury time, United got a consolation when a dangerous cross by Jon Daly was met by Goodwilllie, who could have shot but instead teed up substitute Johnny Russell to power past Forster. Celtic responded immediately, Daryl Murphy showing good composure to beat Pernis with the last kick of the game.