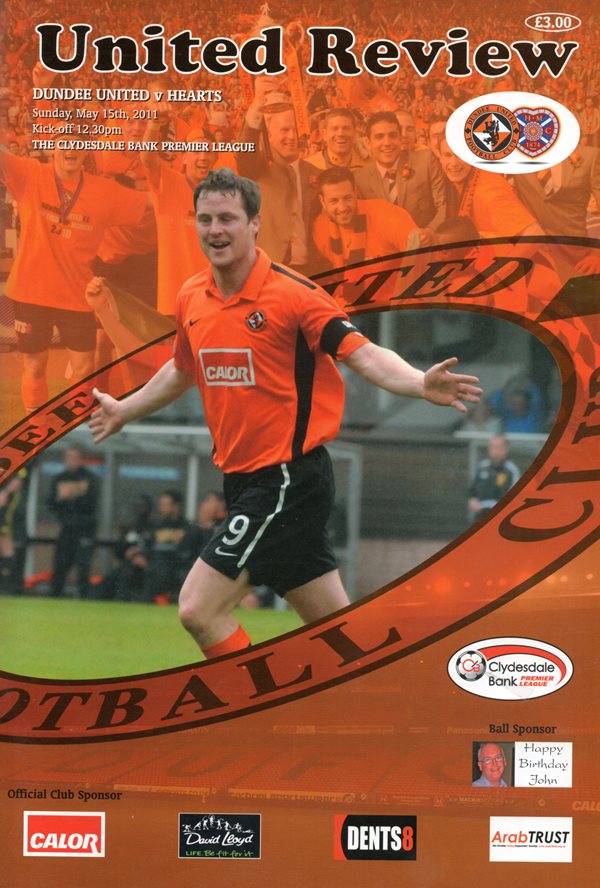 United made four changes to the line-up that started in the defeat to Rangers at Ibrox, with Garry Kenneth, Keith Watson, David Robertson and Scott Robertson being replaced by Sean Dillon, Mihael Kovacevic, Prince Buaben and Jon Daly.

Far from serving up a typical end-of-season encounter, the both the Terrors and the Jambos seemed intent on finishing their campaigns with a flurry. The opening quarter-of-an-hour ebbed and flowed from end to end with both teams creating chances. United came closest to opening the scoring when Hearts ‘keeper Marian Kello denied Goodwillie with a brilliant point-blank save. But Goodie wasn’t to be denied for long, as United went 1-0 up with 22 minutes on the clock. Craig Conway’s in-swinging cross was flicked on by Johnny Russell for David Goodwillie to poke home from close range. However, Hearts hit back and equalised with just over half-an-hour played. David Templeton’s cross was met by Gary Glen and his glancing header beat a stranded Dusan Pernis to make it 1-1. Templeton almost turned the game on its head when picked the ball in midfield and unleashed a 30-yarder goalwards, but Pernis touched over. Conway – who scored a cracker in the 4-2 win at home to Kilmarnock last month – was next to try his luck from distance. Goodwillie held the ball up in midfield and fed Conway on the left wing. He cut inside and let fly, but the ball flew a couple of feet over the bar.

The second half continued in much the same pattern as the first with both sides looking to get the winner. A good one-two between Goodwillie and Kovacevic gave the full-back the first noteworthy attempt at goal, but his effort was turned round the post. From the resulting corner Daly headed into the arms of Kello. A Kello throw-out was then intercepted by Gomis, who dinked the ball through to Goodwillie, who had beaten the offside trap, only to fire his shot across the goal and narrowly wide of the post. Moments later, Russell cut inside from the right and played the ball into the path of Buaben, but he blazed his left-footed shot over the bar. Mid-way through the second half Templeton could have given Hearts the lead had it not been for the quick reactions of Pernis. The Hearts midfielder latched on to a loose ball and was through one-on-one with the Slovakian stopper, who raced out of his goal to block the effort and clear the danger. But it was United’s pressure which eventually paid off. With 71 minutes played, Dillon’s long ball forward was flicked onto the head of Goodwillie who nodded the ball into the path of Jon Daly whose powerful 20-yard drive flew past Kello to put the Tangerines 2-1 up and seal the three points. With fourth place in the SPL secured some weeks ago, the Terrors just ran out of games to catch third placed Hearts and guarantee a Europa League spot. The result meant United finished the campaign on 61 points – just two points behind the Jam Tarts.

As we come to the end of the season, it is time to reflect on what has been a real stop start campaign. Almost from day one, we were badly hit by injuries. I don't care what anyone says. but when you suffer the number of injuries that we have, it is going to impact on the squad and results. We have had to dig deep, but still pulled 58 points and just five shy of last season. As I have said on several occasions, the absence of our two most creative players, Danny Swanson and Craig Conway, hit us hardest. Without them, we are still just as dogged, but didn't create anything like the number of chances as we did last season. So it is no coincidence with them both back in the side at the end of February, the goals started coming. Some people thought we were fielding four central midfield players to grind out results, but it wasn't through choice, just sheer necessity, so credit is due to our central midfield players. Defensively at times, we were also stretched. For example at Ibrox last month, we went there with two young fullbacks in Keith Watson and Barry Douglas plus two full backs in central defence - Sean Dillon and Paul Dixon - and won! With the squad of players available, off some fantastic results. As we go into the last game we he season's total. In the circumstances, getting anywhere near that has been a great achievement, because we have also had a very heavy schedule due to the bad winter. In fact, we were the worst affected team in the SPL. That shows the character and resilience in the squad and on a much smaller budget compared to Hearts, and of course, the Old Finn, so great credit to the players.

Unlike this time last year when we had very few players leave, it is a different story this time round. Our fans will be disappointed that we have several key players departing. Unfortunately, finances dictate that they move on and the players themselves want a new challenge, especially as they can earn a lot more money than they can at Dundee United. When I look at the players and look at last Saturday's performance against Motherwell for instance, Morgaro Gomis and Craig Conway, two who are moving on, definitely didn't down tools and worked ever so hard. In fact I rated it as Morgan's best performance of the season. So he is still focussed and that's the attitude of the boys. So anyone who is leaving Tannadice goes with my best wishes, because they have done this football club a right good turn. They have been part of a team that in maybe ten years' time wUl be invited back because they helped win the Scottish Cup. And equally these lads will be invited back in the years to having not only brought the cup back to Tannadice for a second time, but furnished third in the league which is a great achievement. Whilst I will be looking to plug some of the gaps by bringing in players, the budget is tight so there will be opportunities for the young lads we have coming through. Stuart Armstrong has already served notice of his potential; Barry Douglas has perhaps played more games than I had anticipated when I brought him in last year; Scottie Allan is another along with Ryan Dow, Dale Hilson and Ross Smith who are all highly rated emerging prospects. However, the demands of the SPL dictate that we can't go too young, so I'U be aiming to bring in at least a couple of experienced men.

Finally, I must pay tribute to our fans. Despite having to endure a stop start campaign, but stuck with us. I am thinking particularly of the backing given to us in the cup games, and particularly at Fir Park where we took a huge following only to let them down so badly, which was a bitter blow to everyone. At Tannadice, I can't recall the fans being disgruntled on too many occasions. The Inverness game at the start of the season being the obvious exception when no one was happy with the manner of the 4-0 defeat, no one more than Fortunately poor performances Like that have very much been the exception rather than the rule, so the fans deserve great credit for the encouragement they have given the players throughout the season. For our final game of the campaign, we welcome Hearts who have had an outstanding season. When I think to the run they had around Christmas, particularly away from home that probably accounts for the difference between the sides now. Whereas they were winning games we were drawing them, although we have won more home games. They have shown they have the ability to grind out results and it is great credit to Jim Jefferies for the season Hearts have enjoyed. And whilst we have clawed back the big lead Hearts held over us, our defeat at Ibrox in midweek means that Hearts have confirmed third place, but we are still looking forward to the game and want to end the season on a high with a win