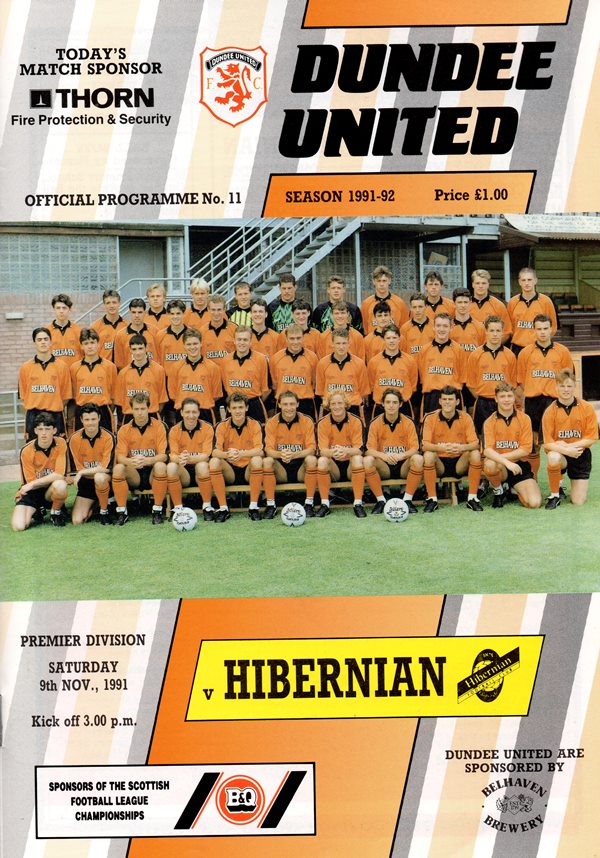 Hibs came to Tannadice having suffered only one defeat all season but as the game drew to a close, it looked as though we were about to make a further inroad into that proud record. However, the men from Easter Road have new found belief in themselves these days and popped up to snatch a dramatic late equaliser. Manager Jim McLean fielded the same starting eleven for the fourth consecutive match as we went in search of our fifth successive victory. We could hardly have had a better start towards that target with a goal after only three minutes. Dave Bowman sent a cross over looking for the head of Ray McKinnon who crashed a first time volley past Burridge. A couple of minutes later Burridge had to dive to his right to save from Duncan Ferguson after Ray McKinnon had sent him clear down the right. The wind and firm pitch were making conditions difficult and Hibs eventually forced their way into the match with a couple of MacLeod free kicks the first hint of danger. Shortly afterwards we did have a narrow escape when Keith Wright ran on to header a long McLeod clearance past Guido Van De Kamp, but the ball struck the post and was cleared to safety by Freddy Van Der Hoorn. Hibs continued to threaten when McGinlay headed an Evans cross narrowly wide of the far post. Ten minutes from half-time tempers became a little bit frayed which led to Evans of Hibs and Billy McKinlay being booked within minutes of one another. Just on the interval we had strong claims for hand ball in the box rejected as a fairly even first half came to a close. There was a blow for us at the interval because Dave Bowman wasn't fit enough to resume and Alex Cleland took over from him.

The combination of Ferguson and McKinnon almost brought us a second goal soon after the break, but this time Ray's shot sped past the far post. Hibs weren't in the game as much as they had been in the first half with a Gareth Evans strike which was well held by Guide Van De Kamp one of their few second half efforts. Substitute Alex Cleland had a great opportunity to score in the 64th minute but Burridge saved his shot from an acute angle. A couple of minutes later we did get the ball in the net, but Duncan Ferguson as ruled to be offside as he netted a cross from Darren Jackson. With our recent run poised to be extended to five consecutive wms, Hibs grabbed an equaliser with only four minutes left. Lennon's corner was met by former United defender, Dave Beaumont, whose header was saved by Guido Van De Kamp but he couldn't hold the ball and Gordon Hunter levelled the scores. Almost immediately, John Clark sent in a header bound for the bottom corner but Burridge saved to earn Hibs a fighting point.

I suppose that after four consecutive victories, three of which were away from home, especially with the way we have been playing, I should be happy.

As usual, however, I am not entirely satisfied. For example, at Pittodrie whilst we were very good in the first half, we then sat back and handed the initiative to Aberdeen and from then on, only one side was going to score and it certainly wasn't going to be us!

When we travelled to East End Park in midweek, we established a two goal lead after playing some excellent football albeit mixed with some more mundane stuff. Yet again, however, we played out the last ten or fifteen minutes hemmed in our own box.

For some reason the lesson just doesn't seem to sink in. The same thing happened at Dunfennline on the last day of last season and it cost us a place in Europe. Unless attitudes change, I regret it will continue to cost us dearly in the future.

On the plus side, the players deserved credit for their work rate and application which has enabled us to gain four very good results. We still lack a bit of blend and I must be showing my age when I confess that I don't like systems without wingers. I would love to see the width and penetration that wingers give a side injected into the team.

At the time of writing it very much looks as though our young defender, Pat Clark will require a cartilage operation after damaging his knee in last Tuesday's reserve match at Aberdeen. It worries me that this could be the fifth such casualty in just eighteen months. Tom McMillan, Christian Dallly, Eddie Conville and Darren Jackson have all been operated on and the odds are that Pat Clark will become the fifth. It makes me wonder whether we expect too much from the players in too short a time.

The players will probably be fed up of me harping on, but no matter what has gone before, today's match against Hibs is now the one that counts. We may well have won our last four games, but, frankly, that was a necessity in view of the leeway we had to make up on the leading clubs and we cannot afford any further slip ups. Hibs come to Tannadice as Skol Cup holders and are playing with a lot of confidence, so today's encounter should prove to be a cracking game.